Critics of the Republican Senate Minority Leader accused him of "saying the quiet part loud," after remarks in January 2022. 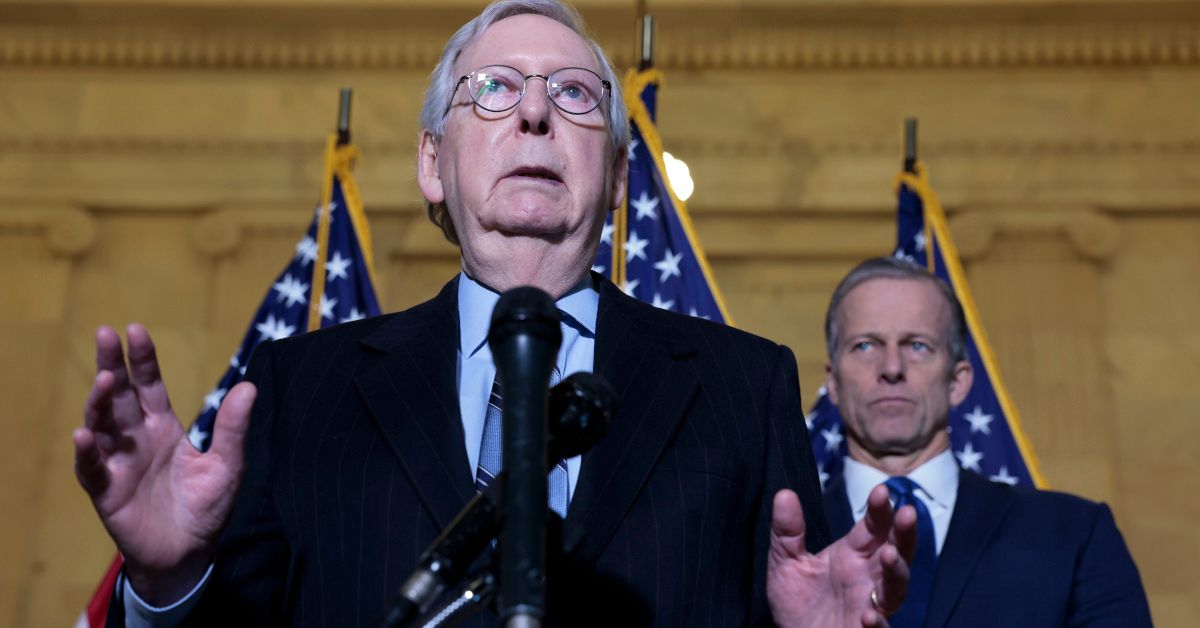 In January 2022, online observers, principally left-leaning or those critical of the Republican party, seized upon what appeared to be a racially offensive remark made, in passing, by U.S. Senate Minority Leader Mitch McConnell.

For example, on Jan. 19, journalist Pablo Manríquez tweeted out an excerpt of his question-and-answer exchange with McConnell at a news conference earlier that evening:

Asked [McConnell] about concerns voters of color have about voting rights. “The concern is misplaced,” said McConnell, “because if you look at the statistics, African-American voters are voting in just as high a percentage as Americans." Soon afterwards, short video clips of the comments emerged on social media. In the footage, an off-screen reporter (namely Manríquez) can be heard asking:

"Leader McConnell, what's your message for voters of color who are concerned that, without the John L. Lewis Voting Rights Act, they're not going to be able to vote in the midterms?"

The senior Kentucky senator replies: "Well, the concern is misplaced, because if you look at the statistics, African-American voters are voting in just as high a percentage as Americans."

By comparing voting rates among African Americans with those among "Americans," McConnell appeared to be articulating a wrong-headed and offensive distinction, one which — at least linguistically and logically — implies that Black Americans are in some sense not fully "American," not at all "American," or are less "American" than white Americans.

(Of secondary relevance here, but worth noting — McConnell also answered a question about "voters of color" by referring exclusively to Black people, even though the former is an umbrella term that also refers to Asian Americans, Native Americans, Hispanic and Latino Americans, and others).

As such, much of the criticism of McConnell suggested that this improper distinction was a kind of racist Freudian slip, or that he was "saying the quiet part loud."

Whatever the explanation for McConnell's remarks, those social media posts accurately attributed those words to him. Furthermore, although widely shared video clips were taken from a longer answer and news conference, that decontextualization did not distort the meaning or sense of McConnell's comments. He did not, for example, quickly correct himself, or give any indication that he was speaking ironically, or while adopting another persona, and so on. He did indeed say what he was shown saying in those video clips, so we are issuing a rating of "Correct Attribution."

McConnell was speaking at a news conference held at the U.S. Capitol by Senate Republican leaders, on Jan. 19, 2022. The news conference can be viewed in full here. The relevant question and answer begins at the 13:14 mark. Though the full context does not alter the sense of McConnell's remarks, in the interest of transparency, a full transcript follows:

Manríquez: Leader McConnell, what's your message for voters of color who are concerned that without the John L. Lewis Voting Rights Act, they're not going to be able to vote in the midterms?

McConnell: Well, the concern is misplaced, because if you look at the statistics, African-American voters are voting in just as high a percentage as Americans. [In a] Recent survey, 94% of Americans thought it was easy to vote. This is not a problem. Turnout is up. The biggest turnout since 1900. It's simply — they're being sold a bill of goods to support a Democratic effort to federalize elections. As Sen. Blunt pointed out, this goes back 20 years. The excuses change from time to time, but this has been a Democratic Party goal for decades.

Snopes asked two spokespersons for McConnell why he phrased his response in the way he did, but we did not receive a response in time for publication.