Given the tumultuous 2020 election season, some unrest is expected. 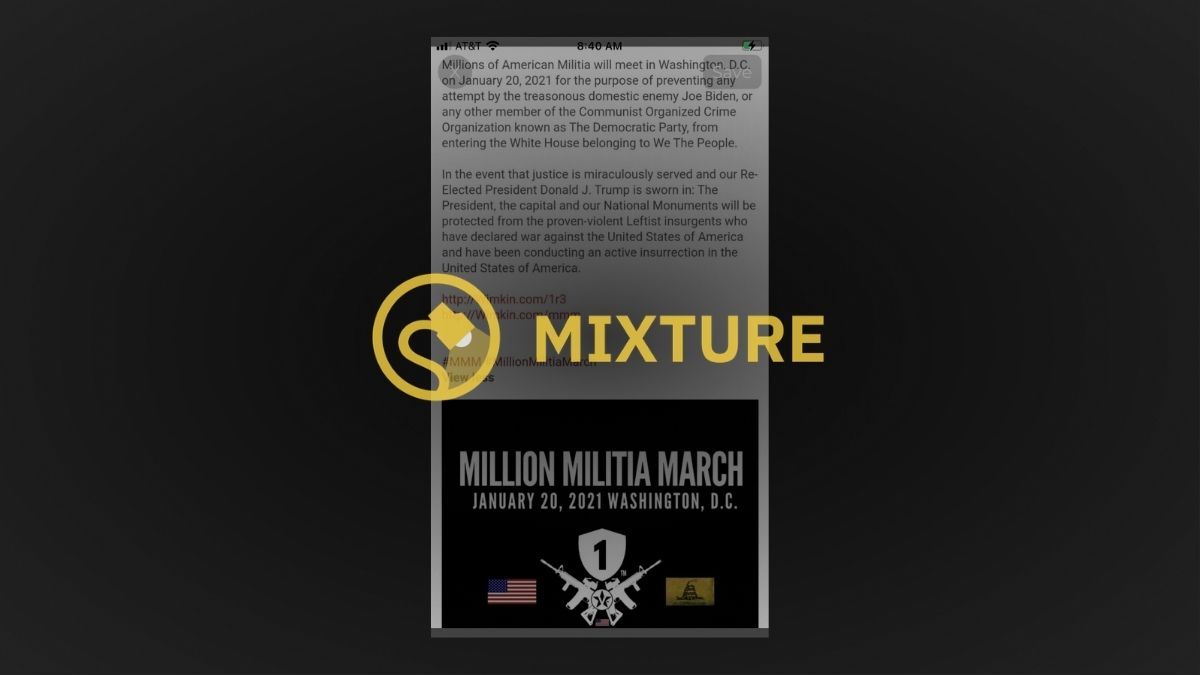 Claim:
On Jan. 20, 2021, millions of people will gather for the "Million Militia March" in Washington, D.C., hoping to prevent U.S. President-elect Joe Biden’s inauguration, and to protect the capital and national monuments against “proven-violent Leftist insurgents.”
Rating:

As of this writing (December 2020), far-right groups like Proud Boys and other extremists say they will protest Biden's inauguration on Jan. 20, 2021, and militia groups have said they will try to prevent Biden's entering the White House. Experts say unrest and violence on that day is possible.

Past incidents of unrest surrounding the election results like the “Million MAGA March” in November 2020 have not numbered in the millions (far from it) and are unlikely to do so in January 2021. There is no evidence leftist groups are planning violence in the capital.

As U.S. President-elect Joe Biden’s inauguration approached on Jan. 21, 2021, the internet was awash with rumors of groups seeking to prevent the inauguration.

One such post made the rounds claiming a “Million Militia March” was planned to prevent Biden’s inauguration from taking place so that incumbent President Donald Trump would be sworn in instead. The post included two links to pages run by an individual named Vic Freeman, who is the self-described founder of the online groups Million Militia March and the 1R3? PMC: Advanced Tactical Security & Private Defense, which featured a large image of the “1st Regiment of the Restored American Republic” at the top of the page. Various posts on the page state that they are a "security company" that aims to "defend" and "stop violence," styling itself as an armed unit that protects against Communist forces. Members of both groups number close to 400, and posts in the group largely appeared focused on anti-mask, pro-Trump, and right-leaning political discussion.

The Oath Keepers, an armed, right-leaning militia group with tens of thousands of members, has also said it does not recognize Biden’s presidency, and members were part of gatherings in Washington, D.C., such as the so-called “Million MAGA March” of mid-November 2020, protesting the election results. Stewart Rhodes, a founder of the militia, told The Independent, “everything that comes out of [Biden’s] mouth will be considered not of any force or effect, anything he signs into law we won’t recognise as legitimate. We’ll be very much like the founding fathers. We’ll end up nullifying and resisting.” It is not clear if Oath Keepers will be in attendance at the January inauguration, though Rhodes did pen an open letter to Trump saying the group would fight a "desperate revolution/civil war against an illegitimate usurper" if Biden was sworn in.

While it is unknown what will actually take place, experts have urged caution and attention to this issue of far-right extremism in the United States and suggested a possibility that violence could erupt around Inauguration Day. Violence did erupt in Washington, D.C., right after the November 2020 election results were announced. The Million MAGA March was attended by tens of thousands (not millions) of Trump supporters. At least 20 people were arrested due to violent clashes between left-leaning and right-leaning demonstrators.

Given that we have no firm proof of a major plot to prevent Biden’s inauguration beyond online posts, but that the threat of violence is a possibility based on expert analysis, we rate this claim a “Mixture.”