A fake news article claiming Mike Pence called for a condom ban led to images decoupling the falsehood from its source. 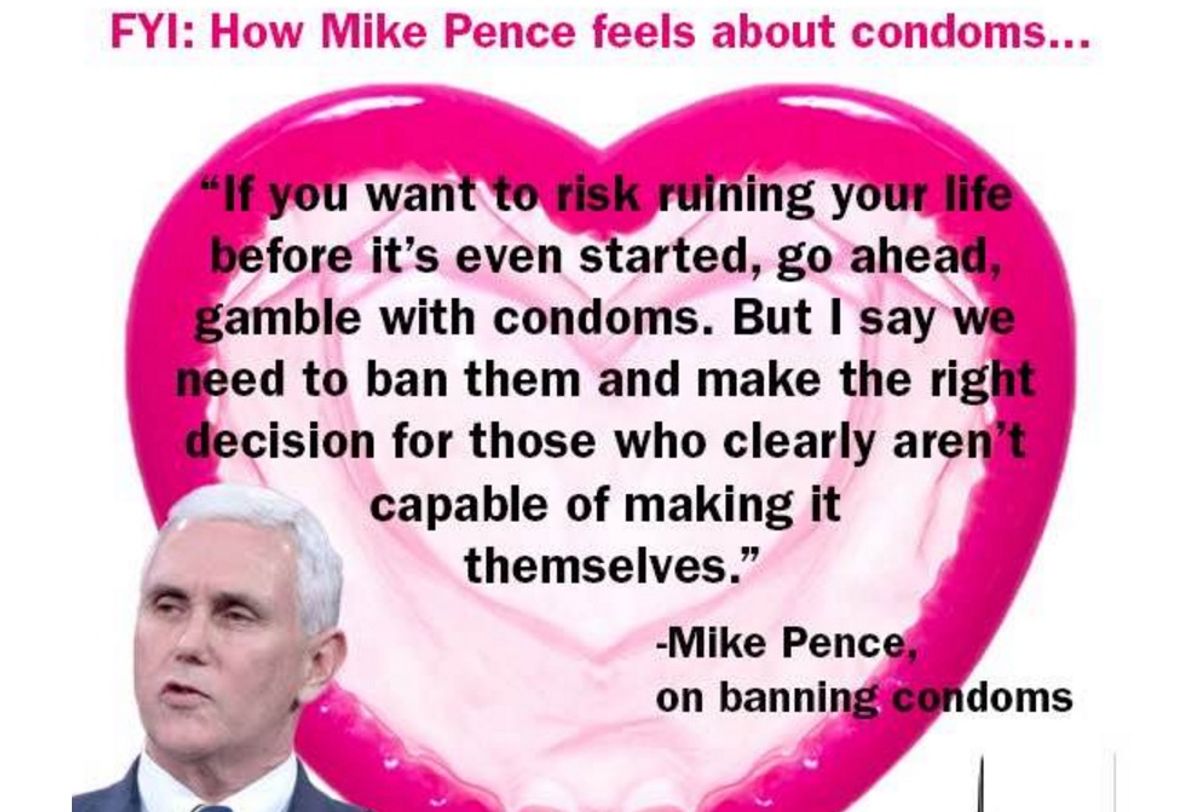 Claim:
Mike Pence called for a condom ban because he said their use leads to abortions.
Rating:

On 16 August 2016 the Newslo web site reported that Indiana governor and GOP vice presidential candidate Mike Pence had once called for a ban on condoms, maintaining their use "leads to abortions":

The Patheos blog recently published an item titled “Mike Pence: Condoms Are Too Modern” reporting that the Indiana governor and Republican vice presidential nominee had dismissed the prophylactic devices as “too modern and too liberal”: “Donald Trump’s running mate is a dangerous Christian extremist who wants creationism taught in public schools and believes the government should pay for gay conversion therapy. In addition, in 2015, as Governor of Indiana, Pence allowed an HIV outbreak to spread, choosing prayer over a clean needle exchange. But perhaps one of the most idiotic claims made by Pence is that condoms are too “modern,” too “liberal,” and offer a poor defense against sexually transmitted infections and diseases,” the item reads.

Asking him to comment on his alleged statement, Pence was interviewed by The Huffington Post ... Pence (then a Congressman) actually made in this regard stemmed from a February 2002 CNN panel discussion about abstinence education. Anchor Wolf Blitzer opened the segment by explaining a current controversy over remarks made by Secretary of State Colin Powell, who had just appeared on MTV and was asked about the Pope’s stance on condom usage by Catholics. “You know, the thing that got me riled up back then, and even does right now,” Pence recalled, “is the fact that Christian youth gets so easily accustomed to using condoms at a very young age. And you know, statistics show, even the manufacturers agree, that they’re just not 100% safe, they’re something like 97 or 98%. That’s not what we want for our kids, is it?”

“I mean, at the end of the day, what condoms actually do is they give our kids a false sense of security, they’re actually tricking them into thinking they’re having safe sex, when in fact, very often, those intercourses result in unwanted teen pregnancies. And the reason why that’s happening is because condoms are designed to be hip, to be modern, to be practical and what not, and the truth is that that’s a lie. The only way to stay safe from premature pregnancy and sexually-transmitted diseases is to practice abstinence and pray to God, that’s the only real way to stay safe,” Pence argued. “At the end of the day, it’s the unjustified trust in condoms that plays a huge part in abortion rates going through the roof ... If you want to risk ruining your life before it’s even started, go ahead, gamble with condoms. But I say we need to ban them and make the right decision for those who clearly aren’t capable of making it themselves. What we don’t need are condoms that are unsafe; what we DO need are smarter kids, apparently,” he concluded.

The item referenced a genuine controversy pertaining to remarks made by Pence about condoms back in 2002 during the course of a CNN panel discussion. But as with all articles published by Newslo (as well as sister sites sites Religionlo and Politicalo), the piece featured a fact-based introduction before introducing believable untruths. Like all articles on those three fake news sites, the Pence piece included a "show facts" or "hide facts" button (though all items displayed by default in "hide facts" mode, obfuscating subsequent fabrications to new readers):

All claims aside from those about Pence's controversial 2002 remarks were embellishments typical of Newslo and its brethren. But readers unfamiliar with the site's tendency to exaggerate topical subjects used Newslo's fabricated quotes as a basis for political images, advancing the idea Pence genuinely said the things attributed to him by the Newslo article (he did not).

Newslo, Politicalo, and Religionlo articles are almost always comprised of a paragraph containing true information and a balance of embellishments about that grain of truth. Previously, those sites advanced claims Chris Christie said a female version of Viagra would lead to an uptick "lesbianism" and voted down a gender pay parity bill for Bible-based reasons, an Alabama politician proposed saliva-based "hunger tests" for food stamp recipients, Ted Cruz said the death of Antonin Scalia was suspiciously timed, Pat Robertson asserted David Bowie was still alive after his death, and that Mike Pence opined that if abortion was allowed in instances of rape that women would attempt to "get raped" in order to obtain an abortion.