Was Comedian Michelle Wolf Once Arrested for Bestiality?

An image of a doctored newspaper article contained the false claim that comedian Michelle Wolf was arrested for bestiality in 2015. 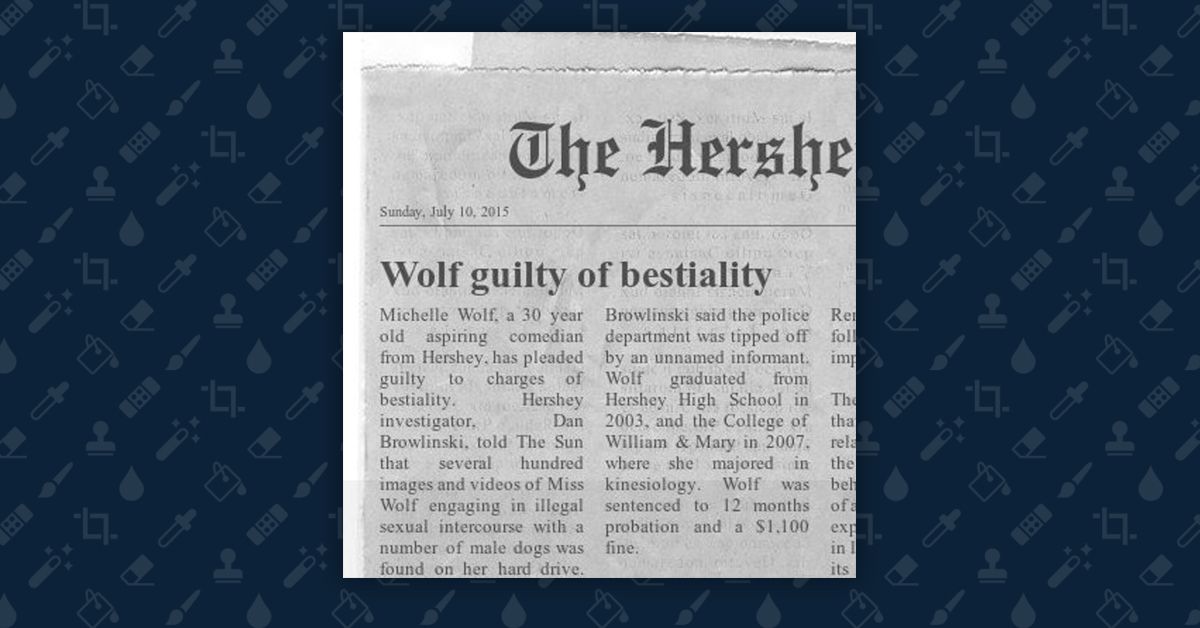 Claim:
A newspaper article from 2015 reported that comedian Michelle Wolf had been arrested for bestiality
Rating:

In April 2018, Comedian Michelle Wolf became the target of a smear campaign after she offered numerous pointed jabs at members of the Trump administration, news media figures, and politicians at the annual White House Correspondents Dinner.

Fake news articles were published falsely claiming that Wolf had been fired from her job at Comedy Central and that her stand-up special had been cancelled by Hulu. We also came across an image of purported newspaper clipping from July 2015 reported that Wolf had pled guilty to bestiality charges: Michelle Wolf, a 30 year old aspiring comedian from Hershey, has pleaded guilty to charges of bestiality. Hershey Investigator, Dan Browlinski, told The Sun that several hundred images and videos of Miss Wolf engaging in illegal sexual intercourse with a number of male dogs was found on her hard drive.

Browlinski said that the police department was tipped off by an unnamed informant. Wolf graduated from Hershey High School in 2003, and the College of William & Mary in 2007 where she majored in Kinesiology. Wolf was sentenced to 12 months probation and a $1,100 fine.

This image is not a reproduction of a real newspaper article, nor was Michelle Wolf arrested in 2015 on bestiality charges.

Here's a look at the template: We created the following fake news article with this newspaper generator. (Just to clarify, the Snopes Daily did not publish an article entitled "Fake News Spreads About Wolf After WH Dinner" on 30 August 1732): The Hershey Sun, the newspaper mentioned in this fake news clipping about Michelle Wolf's being arrested for bestiality, also published an article debunking the image:

For example, The Sun is a weekly newspaper and is published on Thursdays, not Sundays. The Sun does not use the typefaces shown in the fake clipping, and The Sun’s police news reports are not written in that style.

“You could go to our website, thesunontheweb.com, and figure out that stuff in five minutes,” Buffington said.

A search of The Sun’s current archives shows no mention of Dan Browlinski. (The Sun dates back to 1871.) A search of the archives does show that a Michelle Wolf was mentioned in 2010 as a bridesmaid at a wedding.

A search of court records in counties covered by The Sun does show that a Michelle Wolf pleaded guilty to speeding in 2018, but the search showed no other offenses.