How to Vote in Mexico

Mexican citizens are indeed required to have government-issued photo ID cards in order to vote in federal elections. 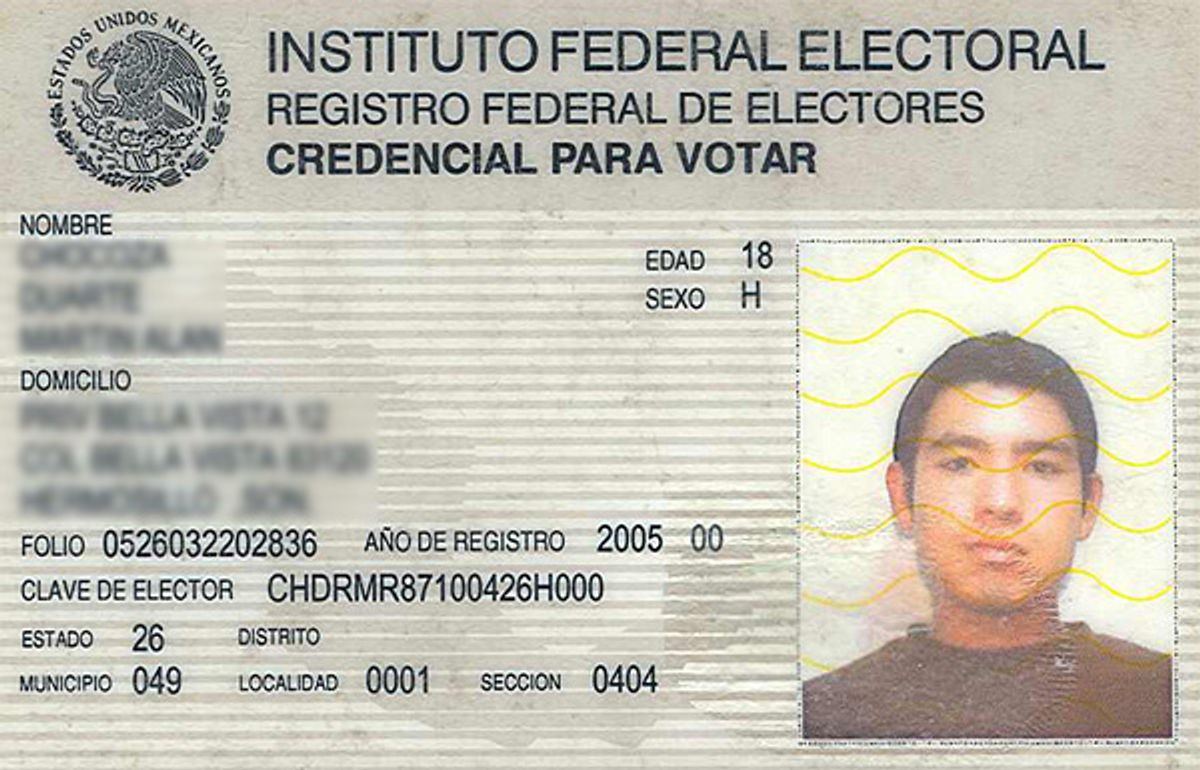 Claim:
Mexican citizens are required to have government-issued photo ID cards in order to vote in federal elections.
Rating:

Since the 1990s, eligible voters in the country of Mexico (i.e., persons of age 18 or greater) have had to visit an electoral office and be registered into the electoral census in order to obtain a voting card issued by the National Electoral Institute (formerly the Federal Electoral Institute). Those voting cards are government-issued photo IDs, credentials that citizens are required to produce at polling stations in order to vote in federal elections in Mexico.

The United States has no equivalent national voter requirements or voter ID card, however. Some states require voters to produce photo IDs in order to vote, while others don't. And even the states that do require photo IDs may still allow voters lacking them to use other means of documenting their identities and/or to cast provisional ballots.

These differences are often cited in opinion pieces (like the meme displayed above) questioning why, if Mexico requires its citizens to produce federally-issued photo ID cards in order to vote, the United States can't or shouldn't do the same in order to crack down on voter fraud. On the other side, critics of voter ID card plans maintain there are a number of reasons why what is used in Mexico isn't necessarily a feasible solution or a panacea for the United States:

During 71 years of uninterrupted Institutional Revolutionary Party (PRI) rule, which ended in 2000, electoral crooks known as Mapaches, or raccoons, went about stuffing and stealing ballot boxes. Stories also abound of PRI operatives plying poor voters with sandwiches and soft drinks and then escorting the recently fed to the polling stations.

Mexican officials unveiled the voting ID to properly identify electors in a country with a history of voters casting multiple ballots and curious vote counts resulting in charges of fraud — most notoriously in 1988 when a computer crash wiped out early results favoring the opposition.

The credential's widespread acceptance deepened democracy by giving credibility to the Federal Electoral Institute, analysts say. The agency was created as an independent agency to oversee federal elections.

"It's a very important prop for support of that institution," said Federico EstÃ©vez, political science professor at the Autonomous Technological Institute of Mexico. "What people really know about (the electoral institute) is the card."

The United States, however (contrary to common public perception) does not have such a history of widespread or concerted electoral fraud:

Five years after the Bush administration began a crackdown on voter fraud, the Justice Department turned up virtually no evidence of any organized effort to skew federal elections, according to court records and interviews.

Although Republican activists have repeatedly said fraud is so widespread that it has corrupted the political process and, possibly, cost the party election victories, about 120 people have been charged and 86 convicted as of [2006].

Mistakes and lapses in enforcing voting and registration rules routinely occur in elections, allowing thousands of ineligible voters to go to the polls. But the federal cases provide little evidence of widespread, organized fraud, prosecutors and election law experts said.

"There was nothing that we uncovered that suggested some sort of concerted effort to tilt the election," Richard G. Frohling, an assistant United States attorney in Milwaukee, said.

Richard L. Hasen, an expert in election law at the Loyola Law School, agreed, saying: "If they found a single case of a conspiracy to affect the outcome of a Congressional election or a statewide election, that would be significant. But what we see is isolated, small-scale activities that often have not shown any kind of criminal intent."

At this point, we can safely classify widespread voter fraud as a misperception — and one that is far more prevalent than the practice itself.