Mexico to Close Border if Trump is Elected 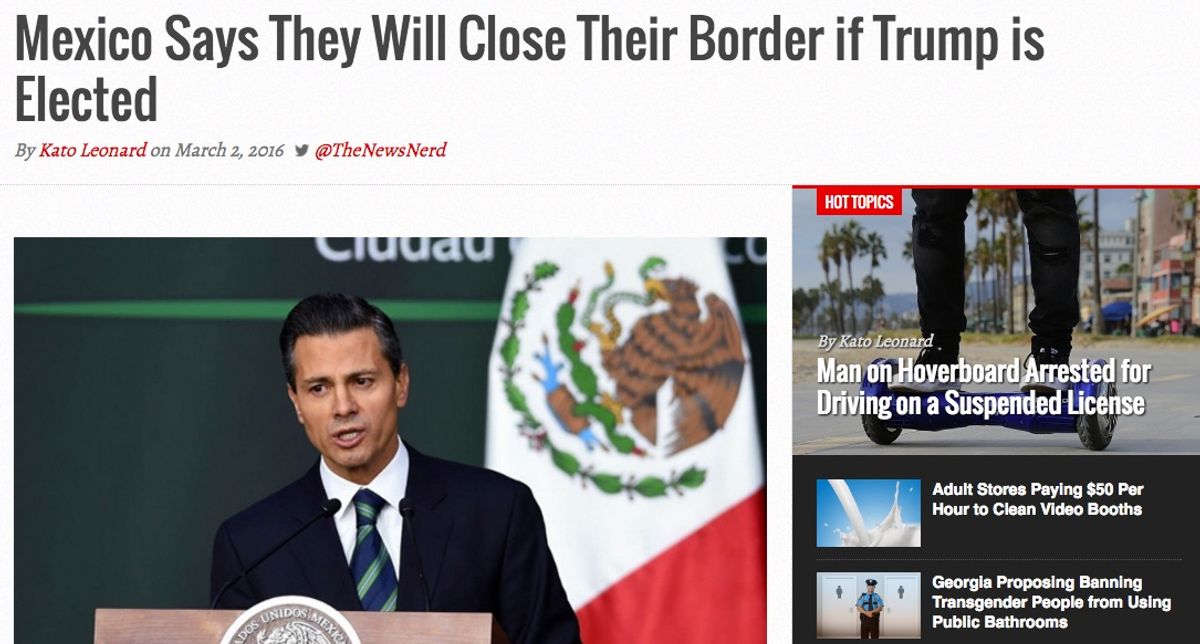 Claim:
Mexico pledged to close the country's borders with the United States if Donald Trump is elected president.
Rating:

On 13 June 2016 the web site My Fresh News published an article reporting that Mexico had announced it planned to close its borders if Donald Trump was elected to office:

The Mexican government announced they will close their borders to Americans in the event that Donald Trump is elected President of the United States. President Enrique Peña Nieto announced the country fears Americans will flood their country and bring violence and chaos to their streets.

“Americans have a well-documented history of violence and we must act to keep our country safe,” President Nieto stated. “Many Americans have expressed a desire to relocate to our country in the event that Donald Trump becomes President. We can not have Mexico flooded with criminals and rapists. They are a violent nation and they won’t send us their best. We must be vigilant and keep a close eye on what could possibly transpire.”

Many took the article at face value, despite a lack of additional reporting on what would be a notable development in foreign relations. On 2 March 2016, satirical outlet TheNewsNerd initially published the fake story. Those who scrolled down past the dozens of angry comments could easily view a disclaimer notice which held:

TheNewsNerd previously published fabricated claims reporting Leonardo DiCaprio planned to wear blackface to an upcoming Martin Luther King biopic, Michael Vick was attacked by a pit bull, George Zimmerman was selling a painting of Trayvon Martin for $30,000, belief in God was classified as a mental illness by the American Psychological Association, and former Subway spokesman Jared Fogle was released from prison due to "overcrowding."