An image purporting to be a screenshot of a news story showing Germany's leader with pixelated hair is a hoax. 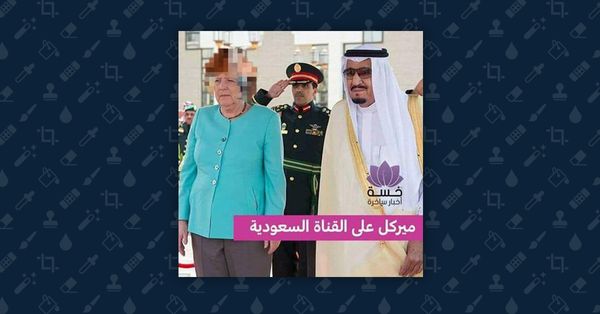 Claim:
A screenshot of a Saudi news story showing Germany's leader with pixelated hair is a hoax.
Rating:

In May 2017, German chancellor Angela Merkel traveled to Saudi Arabia to meet with that country's leaders.  According to news reports, she chose to not don the traditional women's garb of that area for the diplomatic visit:

German Chancellor Angela Merkel traveled to Saudi Arabia to meet with its top leaders Sunday —but she chose not to wear the traditional headscarf and full-length robe that women and girls who live in the country are forced to wear.

It was Merkel's first trip to Saudi Arabia in seven years. Women visiting the country are not legally required to cover their hair or wear a robe, but diplomatic officials have advised them to do so or face possible arrest.

Shortly after the visit, an image on social media purported to show that Merkel's hair had been censored on Saudi television: Despite the fact that this tweet says it's "not a joke," it actually is, quite literally, a joke. The image originated with a Facebook page called "Khase News," which shared it with a caption that reads: "Just for fun." They also clarified in the comment section that they are a "satirical page" and that the post was intended to be ironic: A spokesman for Khase News told a British news outlet that the doctored photograph was created and disseminated to make a specific political point:

Saudi Arabia is one the most oppressive regimes in the world and in the Middle East,” a spokesperson for Khase News told i. “The photo is criticising the fact that in Saudi it is forbidden for a woman to show her hair. “Yet when a powerful like Merkel comes, [the regime] does nothing about it."

The original photograph is also not a still from a television clip; instead, it was released by the Saudi Press Agency:

A screenshot from the Saudi channel Al-Ekhbariya, provided here by Swedish news outlet Metro.se in a piece debunking the image, also shows that Merkel's hair was not actually pixelated:

Saudi Arabia's human rights record has received widespread criticism, particularly after the country was elected to the United Nations Commission on the Status of Women in April 2017. As human rights organizations have pointed out, men in the country retain control over many aspects of the lives of women.