Did Melania Trump Wear This Jacket on Her Way to Visit Children Separated from Their Families?

The First Lady made a surprise visit to detained immigrant children while wearing a jacket bearing the message "I DON'T REALLY CARE DO U?" on the back. 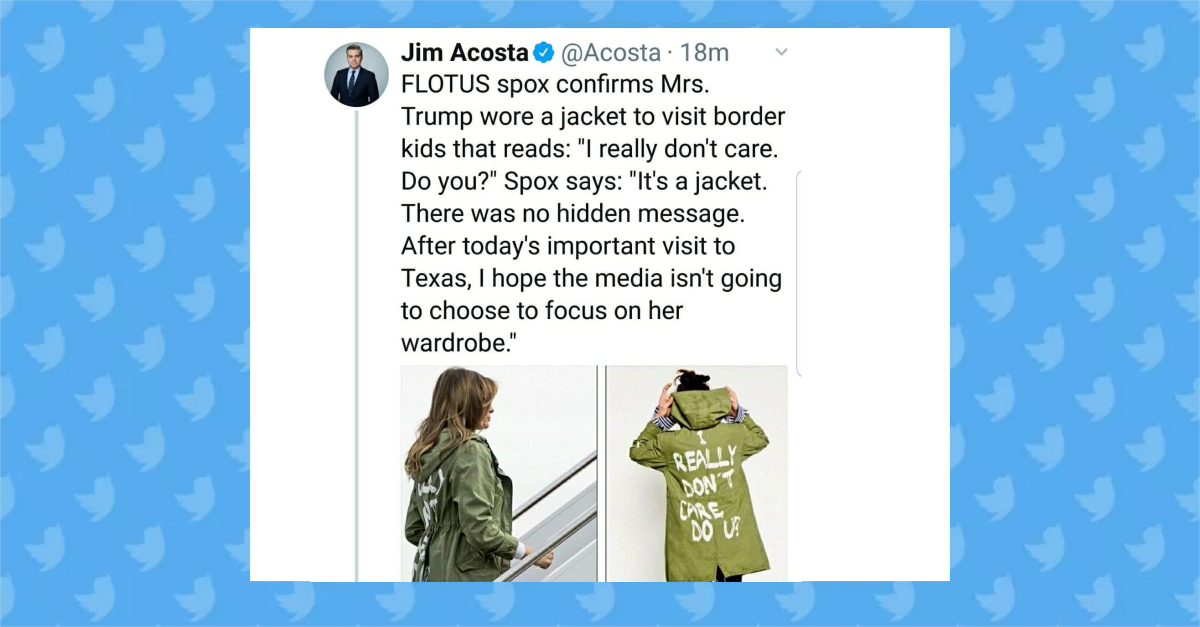 Claim:
First Lady Melania Trump wore a jacket with "I DON'T REALLY CARE DO U?" emblazoned on the back on her way to visit immigrant kids.
Rating:

On 21 June 2018, First Lady Melania Trump paid a surprise visit to immigrant children detained under a Trump administration policy to separate families at the border. Shortly thereafter, the news of her visit was eclipsed by discussion stemming from social media images of a jacket she was purportedly wearing as she boarded her plane: The First Lady's army-green jacket with a painted design on the back reading "I REALLY DON'T CARE DO U?" quickly became the dominant topic of news and social media. CNN's Jim Acosta quickly confirmed that the photographs were legitimate, and the article of clothing Mrs. Trump wore was real:

FLOTUS spox confirms Mrs. Trump wore a jacket to visit border kids that reads: "I really don't care. Do you?" Spox says: "It's a jacket. There was no hidden message. After today's important visit to Texas, I hope the media isn't going to choose to focus on her wardrobe." pic.twitter.com/Bp4Z8n455G

Acosta's observation was confirmed by photographs and by other reporters:

The $39 ZARA jacket the first lady wore as she boarded a plane to visit immigrant families in Texas read: "I REALLY DON'T CARE, DO U?"

boarding the plane this morning, @FLOTUS wore a @ZARA jacket, olive military style -- but it was printed on the back with the phrase "I don't really care. Do U?" An unfortunate sartorial decision ...

Mrs. Trump's Director of Communications, Stephanie Grisham, addressed the jacket controversy via Twitter and shared video of the First Lady wearing a different pale yellow jacket later in the day:

Today’s visit w the children in Texas impacted @flotus greatly. If media would spend their time & energy on her actions & efforts to help kids - rather than speculate & focus on her wardrobe - we could get so much accomplished on behalf of children. #SheCares #ItsJustAJacket

.@FLOTUS: "We all know they are here without their families, and I want to thank you for your hard work, your compassion, and your kindness you're giving them in these difficult times." https://t.co/atwSL8nqq6 pic.twitter.com/iK44O5dgis

President Trump later tweeted that the message on his wife's jacket was a reference to the "Fake News Media":

“I REALLY DON’T CARE, DO U?” written on the back of Melania’s jacket, refers to the Fake News Media. Melania has learned how dishonest they are, and she truly no longer cares!

According to InStyle magazine, the "I REALLY DON'T CARE DO U?" jacket originated with fast-fashion brand Zara. It retailed for $39 but has since sold out.

Updated 21 June 2018: Added comment from the First Lady's Director of Communications and video of Mrs. Trump at one of the detention centers.