Did Melania Trump's Parents Arrive in the U.S. Through 'Chain Migration'?

A Twitter post painted Viktor and Amalija Knavs's immigration status as a symbol of hypocrisy on the part of the Trump administration. 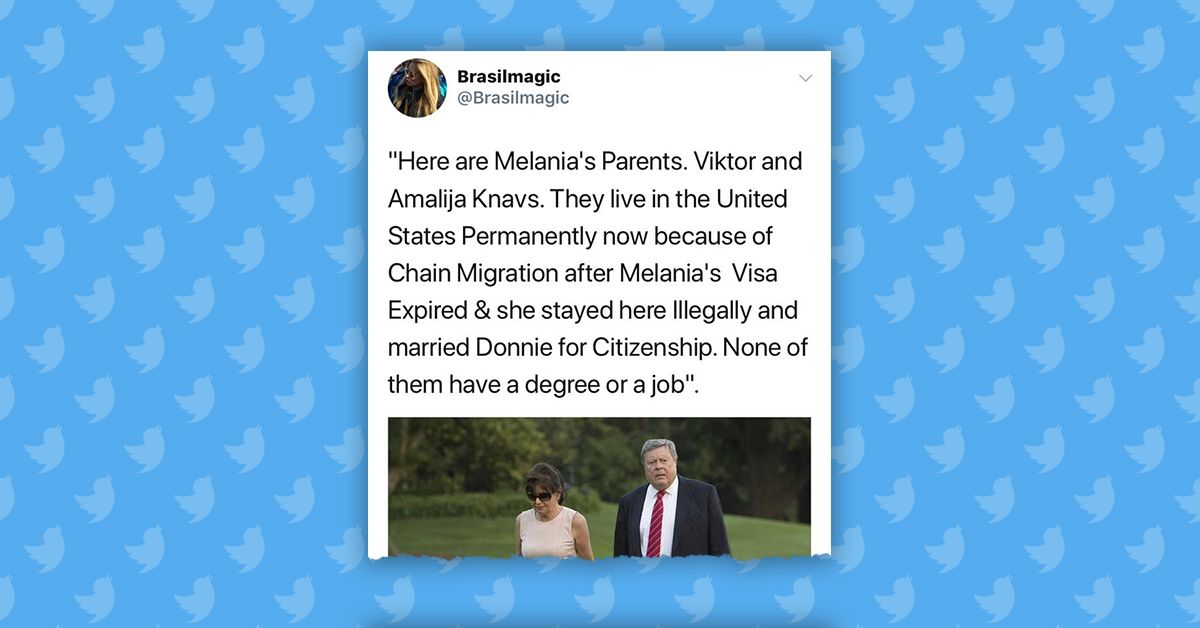 In February 2018, speculation about First Lady Melania Trump and her immigration status found another outlet in a Twitter post portraying her parents' presence in the United States as an example of President Donald Trump's hypocrisy.

The post features a picture of the first lady's parents, Viktor and Amalija Knavs, below the caption:

Here are Melania's Parents. Viktor and Amalija Knavs. They live in the United States Permanently now because of Chain Migration after Melania's visa Expired & she stayed here illegally and married Donnie for Citizenship. None of them have a degree or a job. It is true that the Knavs live in the United States. But exuberant miscapitalization aside, their immigration status remains unclear: not only has the White House refused to comment, but immigration status is not a matter of public record. The Trump administration has, however, continually referred to the practice of issuing family reunification visas for parents, spouses or children as "chain migration." Trump has called the practice a threat to national security despite the strict guidelines on which relatives are eligible, as well as annual caps on the amount of immigrants allowed to enter the country in this manner.

Melania Trump's immigration status first became fodder for public discussion during her husband's presidential campaign, which started with his denunciation of immigrants from Latin American countries. On 14 September 2016 she posted a letter on Twitter from immigration attorney Michael J. Wildes addressing the allegation that she married the future president in order to become a U.S. citizen. Wildes wrote:

Mrs. Trump did not receive her green card through marriage. Rather, in 2000, Mrs. Trump self-sponsored herself for a green card as a model of "extraordinary ability," and on March 19, 2001, she was admitted to the United States as a lawful permanent resident. Based on this timeline, Mrs. Trump became eligible for citizenship in 2006, after five years of continuous permanent residence.

However, observers at the time noted that neither her tweet nor Wildes's statement included corroborating documentation, which they deemed hypocritical considering that her husband was a proponent of the widely debunked "birther" theory accusing former President Barack Obama of having been born outside of the U.S.

David Leopold, another immigration attorney who served on the platform committee for the Democratic Party in 2016, said of the future first lady's release:

There are plausible explanations for everything we know about her immigration history. Which begs the question: Why won't the Trump campaign simply show the American people the relevant immigration paperwork?