Is This Yet Another Picture of a Melania Trump 'Body Double'?

A conspiracy theory based on one photograph won't cut it if there are literally hundreds of other photographs — and video — that argue against it. 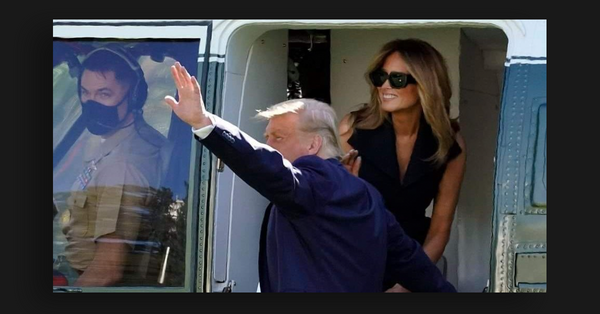 A rumor that U.S. first lady Melania Trump uses "body doubles" to take her place in public events has been a persistent feature of the Trump administration. Snopes has previously debunked several instances of the claim. In October 2020, the claim gained renewed attention with a Tweet by comedian and producer Zack Bornstein:

The reference to the Christmas tree (a nod to leaked remarks Melania Trump made about her disdain for her Christmas-decoration duties in the White House) suggests this specific accusation may not be a serious one, but the claim has nevertheless gone viral. The purported evidence is simply that the person pictured entering the helicopter in that photograph doesn't really look like her: All instances of the present "body double" accusation rely on that single picture, taken by Associated Press photographer Alex Brandon, as the Trumps departed the White House bound for the final presidential debate in Nashville, Tennessee, on Oct. 22, 2020. Here's the thing about a photograph of a president: usually hundreds, if not thousands, of other photographs accompany them. Maintaining a belief in this iteration of the body double theory requires being suspicious of all the other photographs or video taken from the same night. Clear photographs from that night and a lack of suspicion around her other appearances that day at that time render that view untenable.

The photograph in question was taken at 01:04:09 p.m. EDT on Oct. 22. The helicopter transported the first couple to Andrews Air Force Base, where they boarded Air Force One bound for Nashville. AP photographer Brandon captured several shots of the two leaving town:

Here, courtesy of Bloomberg News, are nearly 13 unedited minutes of video taken of them as they were leaving:

In addition to being photographed entering and exiting Air Force One, and photographed in the audience at the debate, Melania was also on television at the end of the presidential debate around 10:30 p.m. EDT.

Though her appearance at the debate, based on Facebook analytics from CrowdTangle for the term "Fake Melania," did not inspire any suspicion at the time, one could perhaps argue that the purported imposter's face was too concealed by sunglasses or a mask in these instances to be useful. That same AP photographer, however, also documented the moment when the first couple touched back down at the White House around 1:00 a.m. EDT on Oct. 23. Melania wore neither sunglasses nor a mask:

"But these photos are too blurry or ambiguous to be of use, either," a persistent believer might argue. Fine. Other photographers also take pictures of presidents moving to and from the White House. For example, here's a couple of high-resolution photographs showing Melania's full face from that same moment taken by Tasos Katopodis for Getty Images: No widespread suspicion of a "body double" gained any traction from any of these other photographs, debate-stage appearances, or videos, despite the fact that they all necessarily involve the same person. For that reason, we rank this claim, like the other "Fake Melania" claims, as "False."