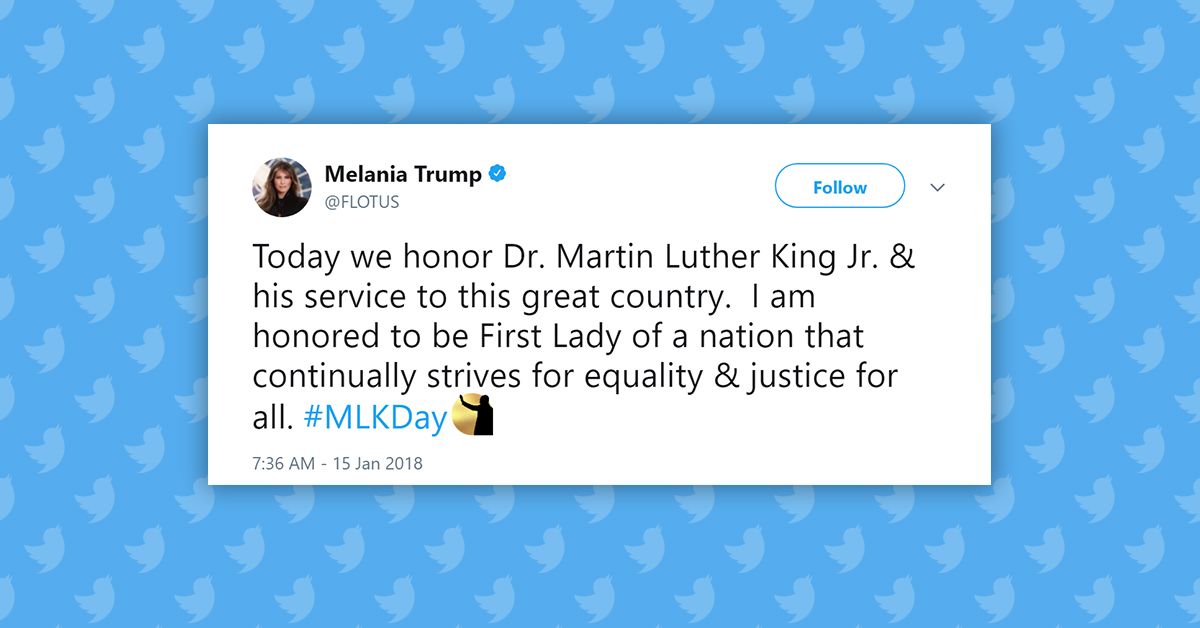 Claim:
Melania Trump plagiarized a portion of a speech delivered by Michelle Obama in 2016 for her tweet commemorating Martin Luther King Day in 2018.
Rating:

Ever since Melania Trump delivered an address at the 2016 Republican National Convention (a speech that was strikingly similar to the one given by Michelle Obama at the Democratic National Convention eight years earlier) the First Lady has been plagued with (mostly false) accusations of plagiarism.

Fake news stories have been published alleging that Melania Trump stole a remark from Hillary Clinton to defend her husband after the "Access Hollywood" tape was made public, that she had plagiarized Michelle Obama for a speech at the United Nations, and that she again lifted a phrase from the former First Lady in her remarks about the violence in Charlottesville, Virginia.

More dirt was headed to this pile of ongoing japes in January 2018 after Melania Trump posted a message on Twitter commemorating Martin Luther King, Jr. Day: The transcribed tweet from Melania Trump is indeed real. It was posted to the official @Flotus account on 15 January 2018:

Today we honor Dr. Martin Luther King Jr. & his service to this great country. I am honored to be First Lady of a nation that continually strives for equality & justice for all. #MLKDay

The purported 2016 message from Michelle Obama, on the other hand, appears to be a fabrication.

This message is also missing from official releases from the White House pertaining to that year's Martin Luther King Day.

The included image of Michelle Obama, however, was truly taken on Martin Luther King Day. Although there's no record of the former First Lady's using this specific phrase on that occasion, she did spend 18 January 2016 participating in a community service project at Leckie Elementary School in honor of the civil rights leader:

Today, to honor the Martin Luther King, Jr. National Day of Service, President and Mrs. Obama participated in a community service project at Leckie Elementary School on MLK Avenue in Southwest Washington D.C., joined by their mentees in the White House Mentorship and Leadership Program, AmeriCorps members and students, parents and teachers at the school.

The President and First Lady helped construct moveable planters with grow lights, planted vegetables, and created labels to place in the planters, which will be part of a long-lasting “MLK Garden” at the school. They also assembled backpacks filled with books related to healthy eating and Dr. King's life story for all 530 Leckie students.