The Florida congressman’s mug shot is real, but memes that make use of the image provide false information. 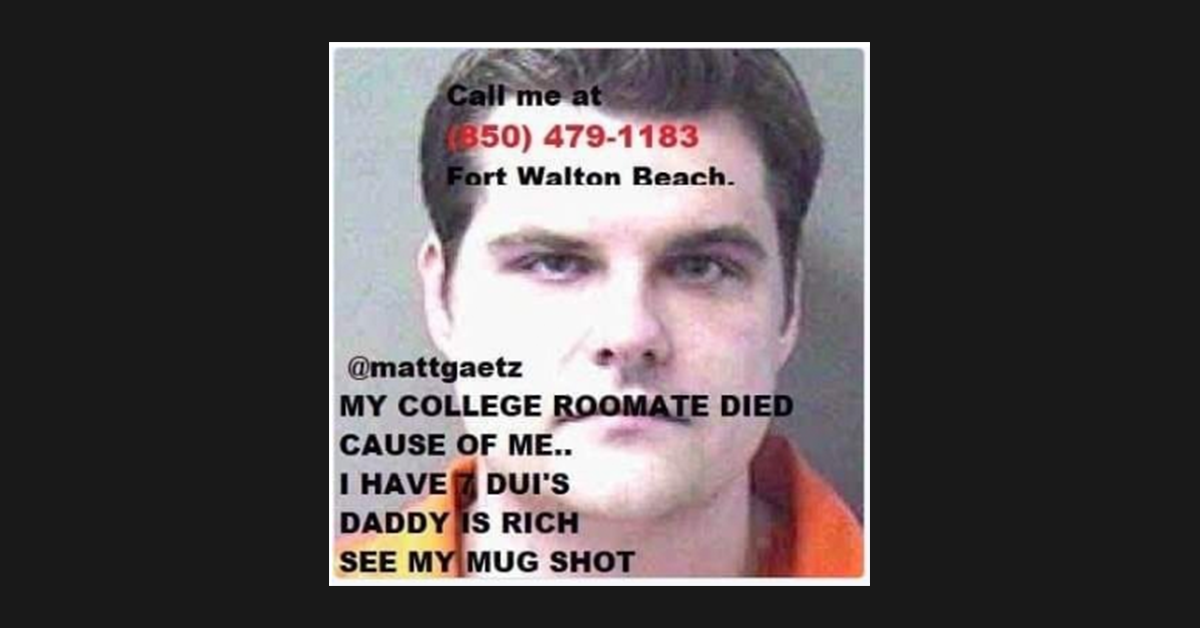 Claim:
A meme showing a mug shot of U.S. Rep. Matt Gaetz suggests that the congressman has had “seven DUIs” and is responsible for the “suspicious” death of his college roommate.
Rating:

The image used in the meme is a genuine mugshot from Matt Gaetz’s October 2008 DUI arrest (but he was never convicted in connection with that arrest).

Claims of “seven DUIs” and a “suspicious” college roommate death have their origin in a post by conspiracy theorist Wayne Madsen and remain wholly unverified.

Memes peddling false political claims often work best when they sprinkle a pinch of fact into their misinformation stew. That appears to be the strategy employed in memes making use of U.S. congressman Matt Gaetz’s mug shot from a 2008 DUI arrest: The fact blended into these memes’ fictions is that a mug shot stemming from Gaetz's arrest for driving under the influence is real, as has been acknowledged by the congressman himself and was reported by the Tampa Bay Times in 2014:

It was the night before Halloween in 2008 when Gaetz, then 26, drove back from the Swamp, a nightclub on Okaloosa Island. He drove a 2001 BMW SUV registered to his state senator dad.

Near midnight, Okaloosa County Deputy Chris Anglin clocked Gaetz going 48 in a 35 mph zone. Anglin later reported that Gaetz fumbled for his license and registration, his eyes were watery and bloodshot, and he swayed and staggered when he got out of the car.

Smelling alcohol, Anglin asked Gaetz if he had been drinking. Gaetz replied no. Minutes later, he admitted he had consumed two beers. Twice, Anglin conducted an eye test. Twice, Gaetz's eyes didn't follow the prompt. Gaetz, who had recently begun practicing law, declined any field sobriety tests. He was arrested and refused the breath test.

A controversy ensued when charges against Gaetz, whose father was a member of the Florida State Senate at the time, were dropped and his license was reinstated. This occurred despite a Florida law requiring a year-long suspension for refusing to take a breathalyzer test. According to the Tampa Bay Times, “A field officer for the Department of Highway Safety and Motor Vehicles declared there was no evidence that Gaetz refused a breath test. Yet the refusal was clearly documented in [the arresting officer’s] affidavit and arrest report.”

The arresting officer, Okaloosa County Deputy Chris Anglin, resigned a month after the Gaetz arrest under pressure from his superiors, who cited disciplinary issues. The question of whether Gaetz’s father’s political connections played an improper role in these outcomes has dogged Gaetz for years. Gaetz, for his part, has dismissed such allegations as “tabloid journalism.”

In terms of what is accessible via public records, the 2008 arrest is Gaetz’s only recorded DUI. Despite that, several memes and articles make the claim that Gaetz has had at least seven DUI arrests. The earliest iteration of this claim appears to stem from an August 29, 2016, post written by conspiracy theorist Wayne Madsen, who stated: "Matt Gaetz, currently a member of the Florida House of Representatives, portrays himself to the Bible-thumping voters of the Panhandle as a God-fearing conservative. However, even a partial glance at Gaetz’s record reveals at least seven arrests for drunk driving and a reputed alternate gay life style. Gaetz’s politically powerful father Don ensured that none of the arrests led to prosecutions."

Madsen provided no hint as to the location or nature of these purported records. We reached out to Madsen via his website to ask if he could provide any documentary evidence for these claims but did not receive a response. A criminal record produced by the Florida Department of Law Enforcement, whom we queried on July 3, 2019, showed only one DUI arrest, but such a report would not include offenses from other states: Public records searches performed by Snopes in other jurisdictions did not turn up any additional DUI arrests.

Another bit of a fact sprinkled into this claim is that Gaetz does have a prolific record of traffic violations. A 2014 investigation conducted by northern Florida newspaper TCPalm tracked the driving records of hundreds of Florida state politicians. Matt Gaetz, with 16 speeding tickets between 1999 and 2014, was among the most frequently cited lawmakers.

Mentions of a “suspicious” death of Gaetz’s roommate during his four years at Florida State University between 1999 and 2003, like the claims of seven DUIs, did not exist online prior to Madsen’s August 2016 piece, in which he stated:

What would be Panhandle politics without a dead body? Gaetz’s roommate at Florida State University was reportedly found dead under suspicious circumstances while they were undergraduate students. ... Sources close to the investigation of the death, however, told [Wayne Madsen Reports] that the Florida Department of Law Enforcement investigated the death as a possible homicide but the agency was later politically-pressured to rule it a suicide.

Madsen's being the only source for this claim merits suspicion on its own: He has a history of making wholly baseless claims without evidence. A prominent proponent of the claim that former President Obama is not a U.S. citizen, he has, for example, falsely claimed that Barack Obama had “homosexual trysts” with Massachusetts Governor Deval Patrick and Senate majority leader Bill Frist (among others), and Madsen is the author of a self-published book asserting that Obama’s rise to the White House was engineered by the CIA.

Not only is the suspicious "roommate death" claim flawed, but further doubt is cast on its veracity by the fact that we have been unable to identify any contemporaneous press accounts of suspicious deaths of a Florida State University student who could possibly have been a Gaetz roommate between 1999 and 2003. Though an administrator at Florida State University confirmed to us that roughly 30 students with expected graduations between 1999 and 2003 passed away during that time period, we found nothing publicly suggesting a Gaetz link to any case that received press coverage. As such, we consider the claim without merit.

While the mug shot and 2008 DUI arrest are true, additional elements of this brand of Matt Gaetz meme appears to be sourced solely from the imagination of a conspiracy theorist.

Madsen, Wayne.   “GOP Dirty Tricks Machine Readies a Charge That Obama Is Not Eligible to Be President.”     Online Journal.   9 June 2008.