Does a Meme Show the Faces of Suspected Mass Shooters in U.S. in 2019?

After two shooting massacres in August 2019 in the U.S., some commentators focused on the racial identities of perpetrators. 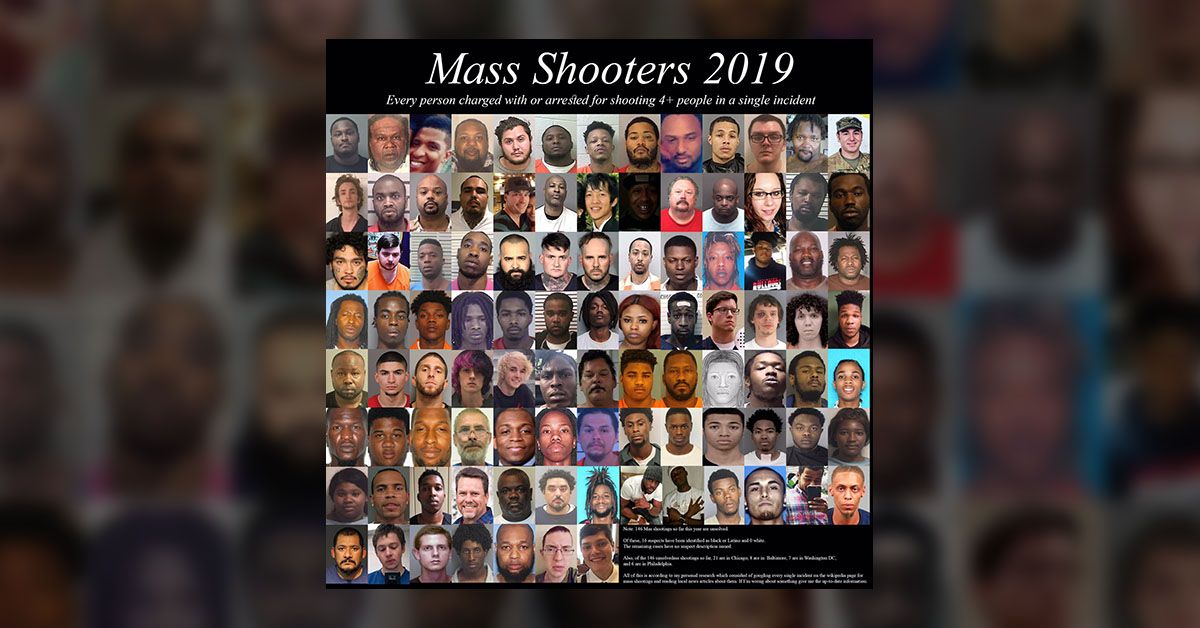 Claim:
A widely shared meme in August 2019 showed the faces of known mass-shooting suspects in the U.S. in 2019.
Rating:

The meme was a broadly accurate representation of the identities of known suspects in 2019 incidents in the U.S. that fell under one relatively broad definition of a "mass shooting."

The meme did not accurately represent the profiles of suspects under several other definitions of a "mass shooting."

In the aftermath of two back-to-back mass shootings in the United States in early August 2019, much debate turned to the demographic dimensions of such massacres, with some commentary pointing the finger at white men, in particular.

In response to such observations, others pointed out the role of non-white assailants in gun violence in the U.S. One graphic in particular caught the attention of internet users.

The meme was first posted on Aug. 5 to the /pol/ ("Politically Incorrect") section of the website 4chan, which is notorious as a forum for far-right and white nationalist imagery, tropes and discussion threads. It was entitled "Mass Shooters 2019" and bore the sub-heading "Every person charged with or arrested for shooting 4+ people in a single incident." Underneath that was a collage of 98 portrait photographs, many of them prison mugshots.

A large portion of the individuals shown in the collage appeared to be non-white, prompting its further promulgation on other online forums, including the website of former Ku Klux Klan Grand Wizard David Duke. The meme prompted much racist and white supremacist commentary. A note under the collage read:

"146 Mas [sic] shootings so far this year are unsolved. Of these, 16 suspects have been identified as black or Latino and 0 white. The remaining cases have no suspect description issued. Also, of the 146 unsolved [mass] shootings so far, 21 are in Chicago, 8 are in Baltimore, 7 are in Washington DC, and 6 are in Philadelphia. All of this is according to my personal research which consisted of googling every single incident on the wikipedia page for mass shootings and reading local news articles about them. If I'm wrong about something give me the up-to-date information."

This meme failed to take into account an essential piece of context in any discussion of mass shootings and those who perpetrate them: how you define a mass shooting.

No fixed, uniformly accepted definition exists of a mass shooting, as we have explained in the past:

Historically, the Federal Bureau of Investigation (FBI) defined what they call “active shooter incidents” as those that result in four or more people (not including the attacker) being shot dead in public through actions not related to terrorism, gang activity, or the commission of other crimes (such as robbery). Since 2013, the FBI has dropped that numerical threshold to incidents involving the deaths of three or more people.

Everytown for Gun Control, a pro-gun-control non-profit that collects data on shootings, also defines a mass shooting as one in which at least four people are killed (not including the shooter) but includes shootings taking place in private homes, a circumstance the FBI omits from their methodology.

Mother Jones magazine, in their mass shootings database, defines such shootings as “indiscriminate rampages in public places resulting in four or more victims killed by the attacker.”

Stanford University’s now-defunct Mass Shootings in America project defined a mass shooting as one in which three or more people were shot (but not necessarily killed), excluding the attacker. Stanford’s definition excluded gang-, drug-, or organized crime-related shootings.

The Mass Shooting Tracker, a crowd-sourced project, defines a mass shooting as an incident in which four or more people are shot, including the attacker.

Of the major sources of data about mass shootings, the Gun Violence Archive has a relatively inclusive definition: “If four or more people are shot or killed in a single incident, not [including] the shooter, that incident is categorized as a mass shooting based purely on that numerical threshold.” This includes shootings in private places, incidents involving gang activity and armed robbery, shootouts, and non-fatal shootings.

The August 2019 meme stated that its inclusion criteria were incidents in which four or more people were shot in a single incident. It did not specify any other criteria, such as whether the total number shot could include the perpetrator, whether it included incidents that took place in private dwellings, whether it included terrorism or gang-related shootings, and so on.

However, the meme also said it had derived its list of incidents from those included in the Wikipedia entry for "List of mass shootings in the United States in 2019." It's clear that that list did include some gang-related shootings, some which took place in a private dwelling, and several incidents in which multiple people were shot but nobody died.

Our relatively brief overview of the alleged shooters included in the August 2019 meme indicates that it was broadly fairly accurate. It contained a few errors, but was faithful overall to its own criteria.

The primary problem with the chart was that it was based on a relatively broad definition of "mass shooting" which, while valid in and of itself, should not be confused with the much more narrow definition implicitly at work in many conversations about "mass shootings" — that is, incidents in which an attacker with no links to terrorism, criminal gangs, or organized crime goes out into a public area and fatally shoots multiple people.

From a law enforcement and criminological point of view, defining a "mass shooting" in this relatively narrow way helps to establish clear parameters in terms of the nature and causes of such attacks, as well as the motivations of the attackers and any patterns in the identities of their victims.

By contrast, gang-related shootings, for example, even if they cross a numerical threshold for victims, have relatively well-studied and straightforward causes and motivations, as well as a much more familiar victimology. Hence, agencies such as the FBI deliberately exclude them from their study of, and operations against, "active shooter incidents."

However, to some observers, especially those primarily focused on the role of guns in violent deaths in the U.S., it is of secondary importance whether a mass shooting was related to a drug feud or a white supremacist act of terrorism. What matters most to these observers is the role of a firearm in causing the deaths of multiple people in one incident. Another example of this is the Mass Shooting Tracker's (relatively rare) insistence on including the death of a perpetrator among the total number of deaths in a mass shooting. The website's reasoning is simple but powerful: "We include the shooter's death because suicide matters ..."

Therefore, how you define a "mass shooting" can often depend on which underlying phenomenon or aspect of a mass shooting is of primary interest to you, and that definition can have a significant effect on the list of incidents on which your analysis focuses.

How you define a mass shooting also indirectly has a bearing on the demographic make-up of victims and perpetrators. For example, we know that criminal gangs in the United States are disproportionately made up of Latino and African American members. Including gang-related shootings in your definition of mass shootings will, therefore, increase the proportion of such perpetrators and victims in your count. That should not be surprising or controversial.

In fact, the full list of mass shootings (according to the broad definition used in the August 2019 meme), is likely to skew even more towards non-white perpetrators than the meme itself shows. This is because, as we explained in our examination of 2018 statistics for mass shootings, unsolved shootings often remain unsolved due to the dynamics inherent in gang conflict.

If an analysis of gun violence and mass shootings is being done in good faith, that demographic breakdown will be an inadvertent byproduct of the decision to include gang violence in one's definition. However, readers should also be on the lookout for those with a racist or white supremacist agenda deliberately tailoring the definition of a mass shooting so as to yield a list of perpetrators with a higher quotient of non-white individuals.

So what are the demographics of perpetrators of mass shootings, if we examine only the more narrow definitions of that term — the elusive phenomenon whereby an assailant without any ties to gangs, terrorism or organized crime, picks up a firearm and shoots multiple people in a public setting?

The most extensive and robust database of gun violence in the U.S. is arguably the Gun Violence Archive. We have used entries from that database and applied the FBI's definition of "active shooter incident" in order to check the demographic make-up of the perpetrators of these much more narrowly defined attacks.

The FBI defines an "active shooter incident" (akin to a mass shooting) as an incident in which a perpetrator shoots dead three or more people (not including the perpetrator) in a single incident in a public place, which is unrelated to terrorism, gangs, and doesn't take place in the course of some other criminal activity (like a robbery or fight).

By this definition, the Gun Violence Archive showed there were six such alleged incidents between Jan. 1 and Aug. 5, 2019:

All six suspects were men, three were white, two were African-American, and the precise racial and ethnic identity of the sixth suspect was not clear.