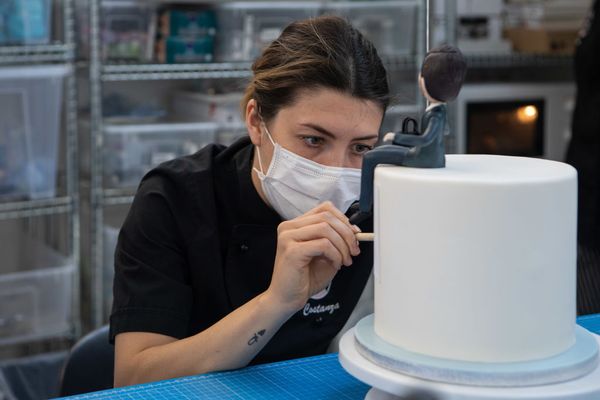 Claim:
Prolonged use of COVID-19-related face masks cause health problems due to breathing in too much exhaled carbon dioxide.
Rating:

Breathing in excessive carbon dioxide is dangerous for the body. Some people with preexisting respiratory illnesses may face health issues only with prolonged use of tight-fitting masks, such as respirators.

However, people wearing cloth or surgical masks are in little to no danger of breathing in unhealthy amounts of carbon dioxide.

During the COVID-19 coronavirus disease pandemic in the spring of 2020, questions arose about protective measures. Social media users shared related images, and in one case, a newspaper column claimed that continual or prolonged use of face masks resulted in breathing too much of one's own exhaled carbon dioxide, which can lead to health concerns.

"Dr. Dennis A Castro B" wrote in the Nigerian newspaper Vanguard, for instance, that prolonged use of face masks causes hypoxia:

Breathing over and over exhaled air turns into carbon dioxide, which is why we feel dizzy.

This intoxicates the user and much more when he must move, carry out displacement actions. It causes discomfort, loss of reflexes and conscious thought. It generates great fatigue. In addition, oxygen deficiency causes glucose breakdown and endangered lactic acid rise.

The post does not specify what kinds of masks cause these issues (though the article image does show N95 respirator masks), nor does it indicate whether this affects people with respiratory conditions more. It should be noted that hypoxia is a condition in which the tissues of the body are starved of oxygen.

Another post on Facebook argued that prolonged mask usage caused hypercapnia, a condition arising from too much carbon dioxide in the blood. Symptoms of hypercapnia include dizziness, drowsiness, fatigue, headaches, feeling disoriented, flushing of the skin, and shortness of breath. Severe symptoms include a loss of consciousness, coma, hyperventilation, twitching muscles, and seizures, among others. Preexisting respiratory illnesses like chronic obstructive pulmonary disease (COPD) can cause both hypercapnia and hypoxia.

But research articles and experts suggest that such extreme symptoms are unlikely to occur in most people. Dr. Abrar Ahmad Chughtai, an epidemiologist and lecturer at the School of Public Health and Community Medicine at University of New South Wales Australia, says the risk of hypoxia and hypercapnia are unlikely to take place with cloth and surgical masks, because they are not tight-fitting:

Some people with pre-existing respiratory illnesses (like asthma, COPD), may face breathing difficulty with use of certain types of tight fitted masks, called respirators. [There is] less chance of hypoxia as they may discontinue using masks in that case. Risk is very low with cloth and surgical masks as they are not tight around [the] face.

He also argued that in the case of prolonged usage of any of these masks, "Dizziness [was] less likely, but fatigue may occur."

The N95 respirator is an example of personal protective equipment (PPE) usually worn by health workers to protect the wearer from airborne particles and from liquid contaminating the face. The Centers for Disease Control and Prevention (CDC) does not recommend that the general public use these masks because health workers and other medical first responders need them more.

A team of Stanford engineers is developing an N95 face mask to counteract the side effects of oxygen deficiency. In an interview, John Xu, a mechanical engineer behind the effort, said:

N95 masks are estimated to reduce oxygen intake by anywhere from 5 to 20 percent. That’s significant, even for a healthy person. It can cause dizziness and lightheadedness. If you wear a mask long enough, it can damage the lungs. For a patient in respiratory distress, it can even be life threatening.

And their focus is on getting these masks to healthcare workers first.

We are targeting this to anyone who has to wear a mask for the long term, first responders, doctors, nurses and even patients who don’t want to infect others. In the near term, we hope to get these into healthcare workers as soon as possible.

The general public is unlikely to wear masks for a prolonged period other than for short stints outside of homes, according to Reuters. A CDC representative spoke to Reuters:

The CO2 will slowly build up in the mask over time. However, the level of CO2 likely to build up in the mask is mostly tolerable to people exposed to it. You might get a headache but you most likely [would] not suffer the symptoms observed at much higher levels of CO2. The mask can become uncomfortable for a variety of reasons including a sensitivity to CO2 and the person will be motivated to remove the mask. It is unlikely that wearing a mask will cause hypercapnia.

The CDC recommends that the general public wear cloth masks, leaving N95 respirators and surgical masks to healthcare workers. They also offer exceptions for who should be wearing them:

Cloth face coverings should not be placed on young children under age 2, anyone who has trouble breathing, or is unconscious, incapacitated or otherwise unable to remove the mask without assistance.

With these recommendations comes the additional guidance that face masks should not be a substitute for social distancing.

The CDC also responded to Snopes about the impact an N95 respirator would have on healthcare workers:

Hypoventilation (deficient ventilation of the lungs) is a primary cause of significant discomfort while wearing an N95 filtering facepiece respirator (FFR). However, studies [indicate] that hypoventilation did not pose a significant risk to healthcare workers over the course of less than one hour of continuous N95 use. When healthcare workers are working longer hours without a break while continuously wearing an N95 FFR, CO2 may accumulate in the breathing space inside of the respirator and continuously increase past the 1-hour mark, which could have a significant physiological effect on the wearer, including headache, altered cognitive judgement, and increased breathing frequency, among other symptoms.

To fix the problem of breathing too much CO2 that has built up within the respirator facepiece, a worker can simply remove the respirator. Some facilities practice oxygen supplementation during these breaks from respirator use, but there really is no need for this as the oxygen in the environment is more than enough to relieve most of the symptoms listed above.

The Vanguard piece also says it is dangerous to use masks in cars:

Some people drive their car with the mask on, that is very dangerous, because, the stale air can make the driver lose consciousness.

Chughtai said he believed such danger was "less likely," and that running while wearing such a mask also was "unlikely" to cause breathing issues, unless the runner had a pre-existing respiratory illness.

In all, little research has been done on the impact of masks on wearers, according to Chughtai. In some studies, participants noted breathing difficulties, but not hypoxia.

Ultimately, the impact of a mask on its wearer depends on the wearer's health, any pre-existing respiratory illnesses, the type of mask, and the length of time the person wears it. In most instances, the effects of prolonged cloth mask usage are small. Masks, like most short-term measures to prevent the spread of COVID-19, should be worn only if the wearer has to be in close proximity to others, and be used in addition to necessary measures like social distancing, and more. As such, we rate this claim about the dangers of masks as "Mostly false."

Centers for Disease Control and Prevention.   "Use of Cloth Face Coverings to Help Slow the Spread of COVID-19."    13 April 2020.