Is a 'Mars Spectacular' Coming Soon?

The planet Mars will not be making a once-in-our-lifetimes, remarkably close approach to Earth on August 27. 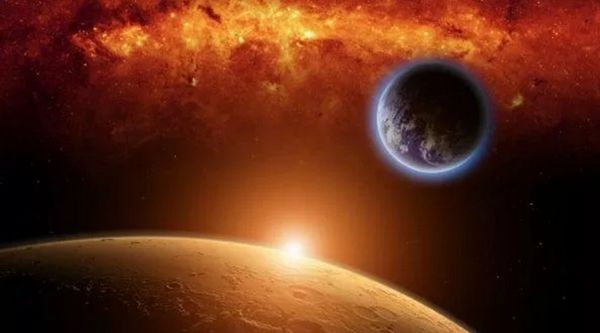 Claim:
The planet Mars will make a once-in-our-lifetimes, remarkably close approach to Earth on August 27.
Rating:

Some things never go out of style, and the annual "Mars Spectacular" message announcing an evening when Mars will appear "as big as the moon in the sky" is one of them. It's yet another example of a widely-circulated e-mail containing information that was once at least partly true but which continues to be forwarded around year after year in embellished form, long after whatever valid information it once contained has become outdated: Two moons in the sky on August 27! The next time this cosmic event will happen again, will be 36,996 ... Share this information as much as possible with your friends because NO human being alive today will be able to behold this incredible phenomenon a second time.

On August 27, around midnight, do not forget to raise your head and look into the sky: Mars will be the most brilliant star in the sky. This is because it will have an apparent diameter as big as the Full Moon! It will be possible to observe, with the naked eye, a cosmic phenomenon which will allow the inhabitants of the Earth to behold … two moons!

This is the first time that humanity will be able to observe this exceptional phenomenon. The last planet Mars proximity of such magnitude dates back to exactly 34,978 years, the Neolithic period during which Neanderthal and Homo habilis, the distant ancestors of Homo sapiens, coexisted together. Species to which the human race –- or more precisely, mankind –- belongs today.

This unique cosmic phenomenon called “two moons” is related, in part, to the proximity of the planet Mars with the Earth. As you must have seen on TV or read in the press, the planet Mars is now closer to the Earth, it is also possible to observe the orange star at night in the sky by looking towards the South. This phenomenon is quite common and appears about every 15 years.

Mars did make an extraordinarily close approach to Earth 17 years ago, culminating on 27 August 2003, when the red planet came within 35 million miles (or 56 million kilometers) of Earth, its nearest approach to us in almost 60,000 years. At that time, Mars appeared approximately 6 times larger and 85 times brighter in the sky than it ordinarily does. (One version of the message was often reproduced with an unfortunate line break, leaving some readers with the mistaken impression that Mars would "look as large as the full moon to the naked eye" without realizing that that statement only applied to those viewing Mars through a telescope with 75-power magnification.)

Although Mars' proximity to Earth in August 2003 (referred to as a perihelic opposition) was a rare occurrence, the red planet comes almost as near to us every 15 to 17 years. To the unaided observer, Mars' appearance in August 2003 wasn't significantly larger or brighter than it is during those much more common intervals of closeness.

Mars had another close encounter with Earth in 2005, but that occurrence took place in October (not August), and the red planet appeared about 20% smaller than it did during similar circumstances in 2003. Mars also made a close approach to Earth in December 2007, but even then it was still about 55 million miles away from us, not nearly as close as it was in 2003 or 2005.

The closest encounter between Mars and Earth since 2003 occurred on 27 July 2018, when the orbits of the two planets brought them to within 35.8 million miles of each other. Astronomers predicted Mars would appear twice as bright as usual around that time (though it was certainly not expected to rival the brightness or size of the full moon).

The 2003 opposition will hang onto the record for the closest approach of Mars to Earth until 2287, when it is estimated the planets will be separated by 34.6 million miles.

Texas astronomer Torvald Hessel observed the following in a 2006 interview about the perennial "Mars Spectacular" message:

A: Mars gets close to Earth every two years. So, last year, Mars was very close. Three years ago, it was spectacularly close ... And right now, I'm sad to say, Mars is actually behind the Sun; we can't see it at all.

Q: How wide spread is this falsehood?

A: People get excited about it, start to send e-mail ... and every August we see this e-mail coming back and I get a lot of e-mails about it, of course.

The Smithsonian National Air and Space Museum also noted in 2010 that:

The e-mail in question is commonly referred to as the "Mars Hoax" or, more accurately, the "Mars Spectacular," and is titled: "Two moons on 27 August or The Red Planet is about to be spectacular!"

It informs recipients that Mars will have an extremely close encounter with Earth during the month of August, culminating on August 27th when Mars is approximately 34 million miles away. The information in the previous sentence was only true during the month of August in 2003. This was a historic astronomical event. Mars was the closest it had been to Earth in 60,000 years. However, this already happened.

The web site of the Students for the Exploration and Development of Space (SEDS) provides a chart displaying data about Mars Oppositions (past, present, and future), and the web site of the Hubble Heritage Project offers some nice composite telescope images from previous Mars near oppositions.