Marco Rubio on Zika and Abortion?

Marco Rubio did not state that Zika-linked birth defects were a punishment from God, nor that abortion was an attempt to evade that judgment. 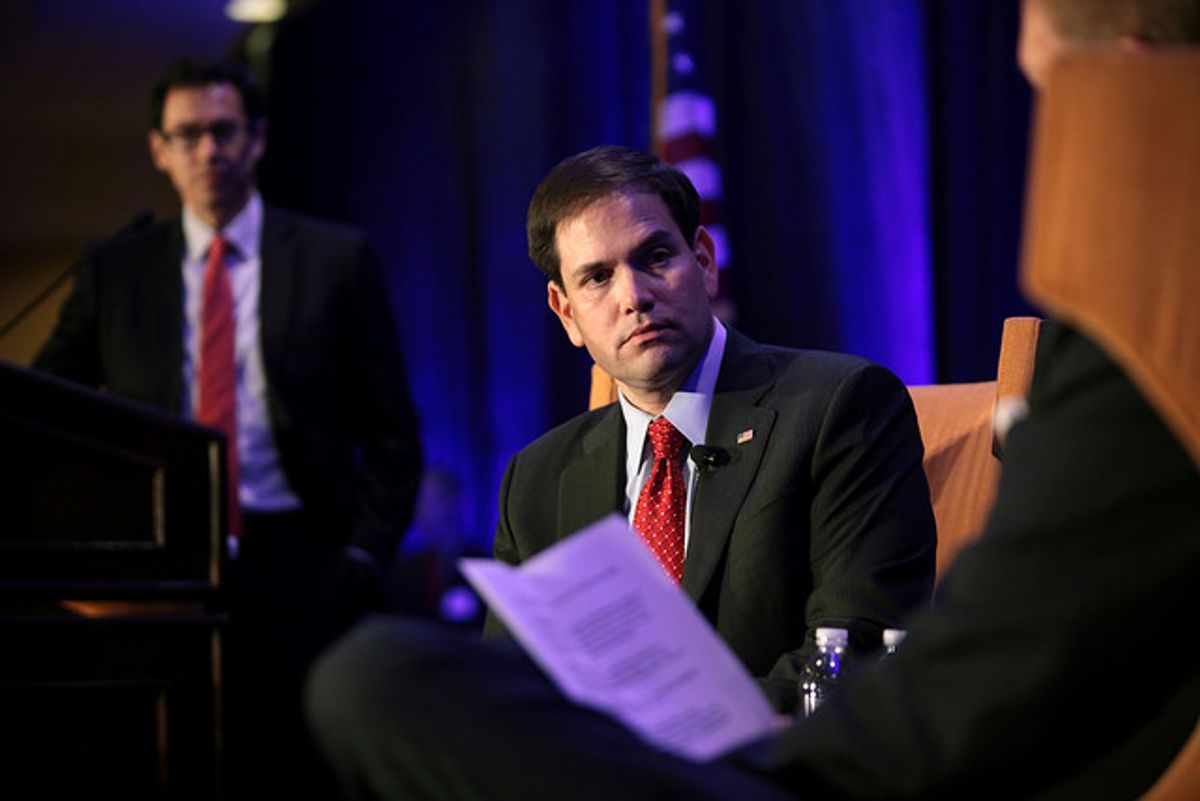 Claim:
Marco Rubio described Zika-linked birth defects as God's punishment of a mother, and abortion as an unacceptable evasion of that judgment.
Rating:

On 21 February 2016, Newslo published an article reporting that Republican presidential candidate Marco Rubio said he is against abortion even if  "God were to intentionally infect a baby in the womb with the Zika virus":

During a weekend interview, CNN challenged pro-life Republican presidential candidate Marco Rubio on his statement during last week’s Republican debate about posing abortion in cases of rape or incest. The Florida senator didn’t back down from his pro-life position. Host George Stephanopoulos said, “You also got called out by Jeb Bush and Chris Christie on the issue of abortion because you don’t support exceptions for rape and incest.” Rubio replied, “Well, first of all, I do require an exception for the life of the mother because I’m pro-life. Number two, I – as I’ve said, if they pass a law in Congress that has exceptions, I’ll sign it because I want to save lives. The broader point I’ve made, however, is I believe all human life is worthy of the protection of our laws.”

... Rubio continued, “What I’m trying to say here is that God created all of us in His image for a reason, and despite the selfishness that is raging through the majority of our population, I believe He put us humans on this Earth to protect and preserve life, not to kill it before it’s even had a chance to start. We are committing murder and we are going to go to Hell for it. And let me just add, I do not believe – let me say that again: I DO NOT believe in abortion, because that’s equal to murder in my book. If God were to intentionally infect a baby in the womb with the Zika virus, for example – I would still forbid the mother to have an abortion and use it to avoid God’s judgment. That’s how adamant I am when it comes to people’s right to freedom and existence.”

The quoted material in the first paragraph was actually legitimate, which caused further confusion.  It came from Rubio's 7 February 2016 appearance on This Week with George Stephanopoulos, during which he discussed his opposition to abortion:

However, that was the only paragraph that wasn't embellished, as indicated by Newslo itself. Articles on the self-labeled "hybrid" news site Newslo (and related sites Religionlo and Politicalo) use controversial news items into which they build fabrications that range from subtle to outrageous.

All content published by Newslo, Politicalo, and Religionlo is displayed by default in "Hide Facts" mode, which masks the clear embellishments from site visitors. In addition to the "Show Facts/Hide Facts" feature, Newslo's disclaimer stated:

Previous Newslo, Religionlo, and Politicalo articles that confused social media users included items claiming that Marco Rubio said women should be placed in custody if it was suspected they were considering an abortion, that Pat Robertson said gay people should wear specific colors by which heterosexual people could easily identify them, that Pastor John Piper decreed bikini waxes a sin in the eyes of God, that David Bowie was alive but held hostage by operatives of Satan, that Ted Cruz believed God would not have allowed Antonin Scalia to die at a time that was potentially not politically expedient, and that a Republican lawmaker proposed saliva-based "hunger tests" for food stamp recipients.