Was Manure Dumped Outside of Democratic Headquarters in Ohio?

A photograph showing a pile of manure discovered outside a political HQ is real, but the picture is years-old. 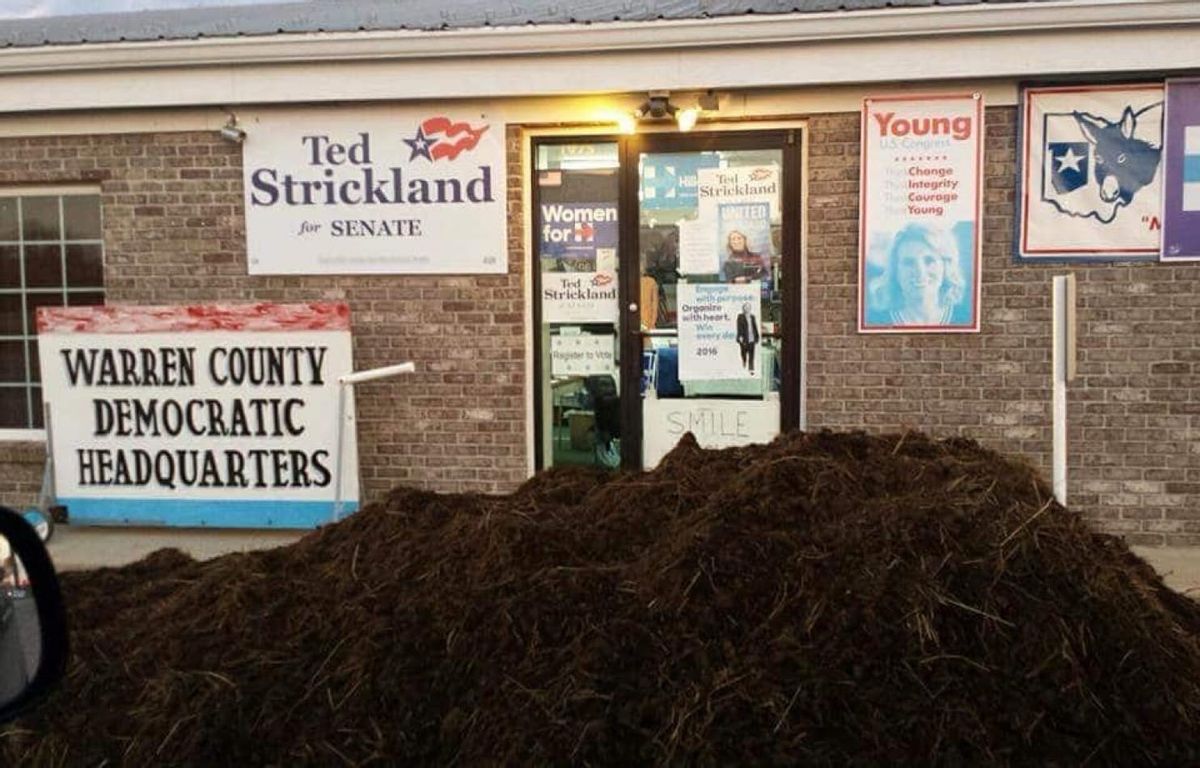 Claim:
A photograph shows a pile of manure outside of Democratic Headquarters in Warren County, Ohio, in November 2018.
Rating:

On 3 November 2018, the web site TrumpSupporter.org published an article about a pile of manure found dumped outside of Warren County Democratic Party headquarters in Lebanon, Ohio: For those who think this election season can’t get crappier, we bring you to Warren County, Ohio, where a large truckload of manure was dumped in front of Warren County Democratic Party headquarters in Lebanon, about 35 miles northeast of Cincinnati.

A sheriff’s deputy was the first to notice the pile and alerted office leaders of it about 8 a.m. Saturday, local party officials told The Washington Post.

This is a genuine photograph of a pile manure dsicovered outside of the Warren County Democratic Headquarters. However, this stinky situation occurred in October 2016 and not in 2018.

In fact, this November 2018 story from TrumpSupporters.org was a word-for-word copy of an October 2016 article originally published in the Washington Post. TrumpSupporters.org simply lifted the entire text, title, and lead image from this story and republished it as if it were a current event.

Warren County Democratic Headquarters was the victim of a poop prank in 2012, and then again in 2016. A few days after the 2016 prank, a man named James Pinell admitted to authorities that was responsible for both political stunts:

A couple of days after manure was dumped in front of the Democratic Party headquarters in Warren County, a man has admitted he did it.

He said he’s fed up with how government officials, Democrats in particular, have not been working for the people. He said he hopes his message was heard.

"It was the world’s cheapest advertising," said James Pinell.

Pinell, 47, of Lebanon, said horse manure he’s usually paid to deliver got him the world’s ear.

"We’re sick of politics. We’re sick of Washington, and you know, it’s a bunch of horse crap they’re putting us through. So I just, more or less, did what I felt," he said.

Pinell, who said he’s a Republican and voting for Trump, said he piled about six-yards worth of manure outside the Warren County Democratic Party headquarters over the weekend.

Pinell was charged with one count of criminal mischief, a third-degree misdemeanor which can be punishable by a maximum sentence of 60 days in jail and a $500 fine. Pinell said that he planned on framing his citation: