A Tennessee congressional candidate put up a billboard exhorting voters to "Make America White Again" as part of his political campaign. 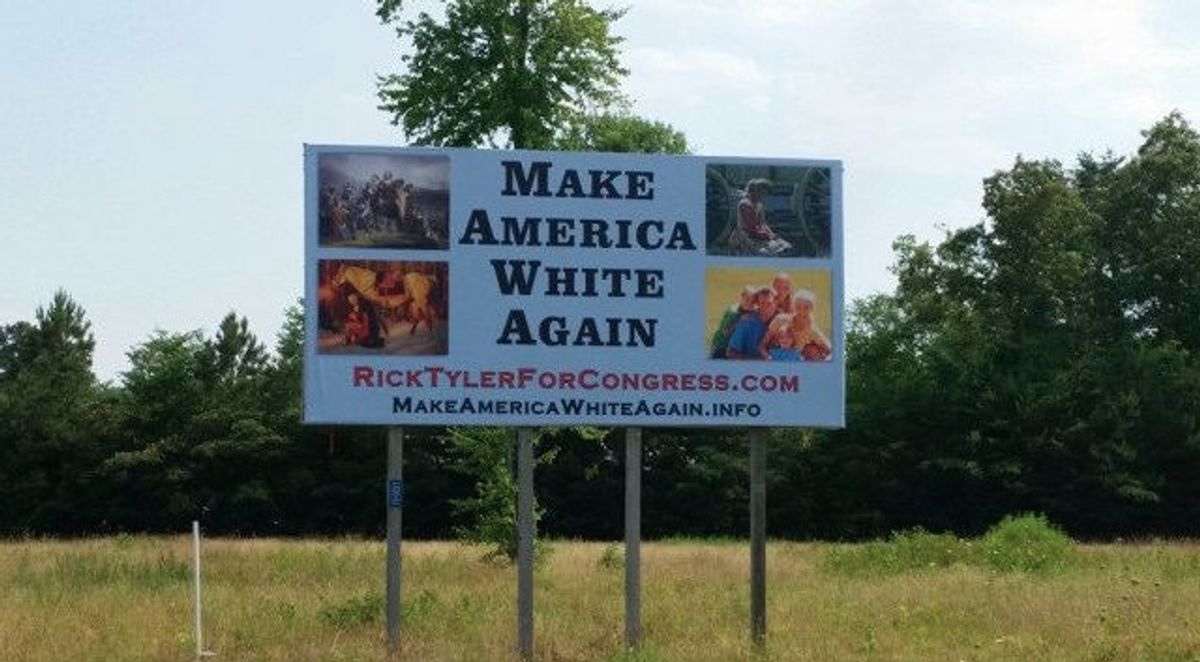 Claim:
A billboard that says "Make America White Again" is part of a political campaign.
Rating:

On 22 June 2016, a photograph purportedly showing a billboard for a Congressional candidate named Rick Tyler, bearing the slogan  "Make America White Again" along with pictures of various white American historical figures and a white family was widely circulated via social media:

Although the image was also published by several legitimate news outlets, many viewers remained skeptical that anyone running for Congress would employ a slogan that seemed so blatantly racist.

According to Nashville television station WSMV the "Make America White Again" billboard was put on display off of Highway 411 in Polk County, Tennessee, by independent Rick Tyler,& who is running for a congressional seat in Tennessee's 3rd district that is currently held by Republican Chuck Fleischmann. A (since-deleted) statement posted by Tyler explained the rationale behind the billboard from his point of view and offered a preview of putative future campaign billboards:

The "Make America White Again" billboard advertisement will cut to the very core and marrow of what plagues us as a nation. As Anne Coulter so effectively elucidates in her book, Adios America, the overhaul of America’s immigration law in the 1960’s has placed us on an inevitable course of demise and destruction. Yes ... the cunning globalist/Marxist social engineers have succeeded in destroying that great bulwark against statist tyranny ... the white American super majority. Without its expedited restoration little hope remains for the nation as a whole.

The following are examples of other billboard designs we plan to bring forth in the coming months. We ask you to prayerfully consider putting meaningful financial support behind this brazen and determined crusade for truth. The controversial billboard was apparently taken down on 21 June 2016, and Tyler's campaign web site has also been inaccessible since then (possibly due to an unexpected crush of traffic. Tyler offered a lengthy response to the brouhaha engendered by his campaign billboard in a (since-removed) Facebook post:

Let me begin by thanking everyone that has gotten involved in the controversy spawned by the “Make America White Again” billboard on Highway 411 in Polk County. I am persuaded that the overwhelming majority of you are sincere and well intentioned. Obviously, there are the “frothing at the mouth lunatics” who react in a completely irrational, emotional, Pavlovian dog fashion. Fortunately, they are a small percentage of the whole—and even they are passionately sincere albeit ignorant, misguided and lacking in self control.

A PREDICTABLE AND DESIRED RESPONSE

Be assured, the response that has been engendered by the billboard is precisely what was expected and hoped for. You see... this is not a mere publicity stunt, but rather a calculated maneuver to dispense hardcore truth while simultaneously doing an end run around the iron curtain of censorship. As Orwell stated, “In a time of universal deceit, telling the truth is a revolutionary act.” Unfortunately, a globalist cartel has long held power in our nation, and in effect, there has already been a soft revolution wherein lawful constitutional government has been supplanted by a rogue band of oligarchic criminals. Those who seek to set things aright are actually counter-revolutionaries, endeavoring to facilitate the restoration of lawful, constitutional government.

Whether you realize it or not, you are all participating in this counter-revolutionary exercise irrespective of where you stand on the matter!
Indeed, the brainwashing may well be too far advanced, and there may be no chance of restoration, rejuvenation, and revival in our once great nation. Like the watchman spoken of in Ezekiel 33, some of us must sound the warning of the advancing and ominous peril that is encroaching upon our civilization as a whole. Like Nineveh, there could be great repentance and revival in America. If not, we will succumb to the fate of Sodom and Gomorrah.

For those who are posturing in a high and mighty stance of ostensible moral superiority, I would caution you against falling into the trap of modernism and the liberal watering down of truth. Your fathers, grandfathers and great grandfathers would have been entirely sympathetic and supportive of the preservation of a white super majority in America. They would have been utterly hostile to the concept of the mass nonwhite immigration that has ensued over the past half century. They would have never acquiesced to the schemes of forced racial integration foisted upon the states by a usurpatious federal government. By capitulating on these and other related issues, you are dishonoring your fathers and mothers of old in a flagrant and treacherous violation of the 4th Commandment. In the fulness of time, God will surely hold you accountable for this violation of his sacred law. As Isaiah 5:20 states, “Woe unto them that call evil good, and good evil; that put darkness for light, and light for darkness; that put bitter for sweet, and sweet for bitter!”

AM I A RACIST?

The charge of “racism” is the most flagrant and abusive canard of our time. Absurdly, those who bandie about the charge never bother to define its meaning. Is a racist one who harbors antipathy toward someone simply based on their ethnicity? If so only a foolish person would fit such a description. If, on the other hand, we are talking about someone who demonstrates greater affinity for his own racial family (your race is the extension of your biological family) then the charge would be truly preposterous. Ethnocentricity is completely healthy and normal and all races, except the white race, are encouraged to engage in and express it. The glaring double standard is all too obvious.

ABOUT THE BILLBOARD'S MESSAGE

The “Make America White Again” billboard is a takeoff on Donald Trump's slogan of “Make America Great Again.” In a nutshell, it is stating that the “Leave It to Beaver, Ozzie and Harriet, Mayberry” America of old was vastly superior to what we are experiencing today. It was an America where doors were left unlocked, violent crime was a mere fraction of today's rate of occurrence, there were no car jackings, home invasions, Islamic Mosques or radical Jihadist sleeper cells.

Additionally, government was much smaller, responsible, and accountable to the people. Yes, that Norman Rockwell America was immensely preferable to the rapidly deteriorating culture now engulfing us. Only the ignorant and misguided would resist its restoration and resuscitation. As set forth on the Tyler for Congress website, (www.ricktylerforcongress.com) a moratorium on nonwhite immigration and the abolition of policies that subsidize nonwhite birth rates would be two constructive actions toward beginning the long journey back toward sanity and stability in our beleaguered and foundering nation.

It is no coincidence that every nation being inundated by the teeming multitudes of the third world is a white nation. It is indisputable that the white race has achieved infinitely more in the way of technology, culture and innovation than the nonwhite civilizations of history.
The racial component of this phenomenon is all-important. In a blind, suicidal manner modern man overlooks this profound truth while plunging headlong toward destruction.

The Caucasian race has been inordinately blessed and favored by the God of scripture. It was among this people that the new covenant gospel of Jesus Christ took root, blossomed, and flourished. Western Christian civilization evolved in the ensuing centuries leading to the eventual rise of our beloved America of yesteryear. As time progressed however, our nation and people lost their way. America forsook the God of her fathers and turned to the false gods of the heathen world. Now we are a people under divine judgment with a very grim future staring us in the face.

The Tyler for Congress candidacy is a last ditch effort to challenge the descendents of America's founders to “return to the ancient landmarks.” Scattered throughout the land are the proverbial seven thousand who have not bowed the knee to Baal. (I Kings 19:18) The remnant of God may not be large enough to facilitate restoration of that which has been lost... but we will proceed to carry the torch in the hope of miraculous and divine intervention.

The incumbent lawyer and representative of the 3rd Congressional District voted for the 1.1 trillion dollar spending bill in December; which among many nefarious expenditures allocated funding for the importation of 100,000 Syrian refugees, a large number of which are straight off of the Jihadist battlefield. A full-blown Muslim invasion is underway while a criminal, runaway federal government gobbles up what remains of liberty at breathtaking speed.

Amazingly, while being oblivious to the aforementioned circumstances plaguing our nation, a substantial number of low information citizens are easily whipped into a frenzy by the mythological enemy of “racism.” Sadly, it never occurs to the reactionary mob that they in fact, are guilty of the grievous sin of rejection of truth. Yet, just as Jesus was able to miraculously give sight to the blind, God is still in the business of peeling the scales off of men's eyes. Yes, he gives grace to the humble but resisteth the proud. (James 4:6.)

Concerning the hostility emanating from various directions I would say the following:

We believe in Libertarian principles of free speech and freedom of association. All are free to go where they desire as well as refrain from going where they do not want to be. Of course, these same individuals will continue to patronize all manner of franchises and national chains that truly are the embodiment of corruption and exploitation. Yet another example of hypocrisy and double-standards.

Will the Rick Tyler for Congress campaign gain traction and become a force to be reckoned with? Only time will tell. When all is said and done however, the truth will prevail. Of that we can be assured.

The Ballotpedia web site records that Tyler ran for the same office in 2014 and received 5,579 votes, or 0.4% of the total votes cast.