Did MAD Magazine Publish 'Super Patriot' Cartoon in the 1960s?

So-called "Super Patriots" love their country, according to the illustration, while hating 93% of the people in it. 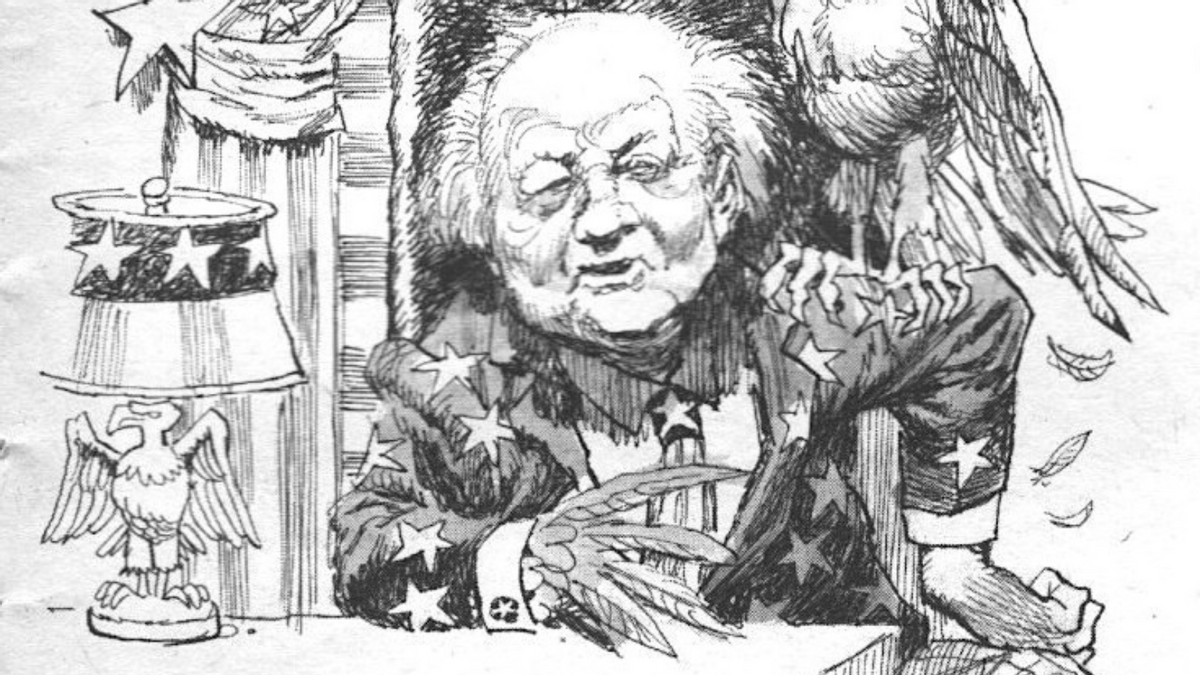 Claim:
A cartoon with text that begins, "See the Super Patriot," was published in MAD magazine in the 1960s.
Rating:

While some posts on social media claim the cartoon appeared in the magazine in 1968, it actually happened the following year.

An image supposedly showing a cartoon from a 1968 issue of MAD magazine is frequently circulated online, often attached to messages expressing dismay that the problems of the past are still the problems of today. The subject of the cartoon is a so-called "Super Patriot" who loves his country "while hating 93% of the people who live in it." The "Super Patriot" cartoon truly appeared in MAD magazine. While this image is frequently shared online as if it dates from 1968, the cartoon was actually published the following year, in 1969.

According to MAD magazine collector Doug Gilford's website, Madcoversite.com, the "Super Patriot" cartoon appeared in issue #129 of MAD Magazine, released in September 1969, and under a section titled, "The Mad Primer of Bigots, Extremists, and Other Loose Ends." This section was written by Frank Jacobs and Stan Hart and featured the artwork of Jack Davis.

The magazine section featured 10 chapters (or cartoons) across three pages that showcased various extremists. The "Super Patriot" was the first chapter in the section. In 2018, comic book artist Bruce McCorkindale posted an image on Twitter that showed the entire first page of this MAD magazine entry:

While many of the cartoons in MAD magazine's "Primer of Bigots" section criticized right-wing politics, such as the "Super Patriot" and the "Right-Wing Extremist," several others targeted the left wing of the political spectrum with characters including "Yippies" and the "phony liberal."

A blog founded by a retired librarian and self-described "comics geek," 50yearoldcomics.com, stated in 2019:

Mad’s primer 'page' on the Super Patriot has been widely shared online in the last several years — generally in a 'the more things change…' sort of context. And it’s not hard to see why. The opinions ascribed to this figure do, indeed, seem to line up with those of many people in the present-day American electorate (though I’d add a caveat that today’s equivalents of the Super Patriot seem to have mostly gotten over their disdain for the 'Very Rich').

The primer’s fourth chapter, on the Right-Wing Extremist, remains timely, as well — although one of its most striking visual details may require some historical explanation. Ax handles?

Anyway, based on these two examples, those iconoclastic, skeptical folks at Mad must have been straight-up, dyed-in-the-wool liberals, right? Well, not so fast. As Chapter Four’s line about the Right-Wing Extremist sounding “just like a Left-Wing Extremist” implies, the authors of “The Mad Primer of Bigots, Extremists, and Other Loose Ends” found fault with extremism at both ends of the political spectrum.

Here's a look at all 10 illustrations that appeared in the 1969 issue, as part of "The Mad Primer of Bigots, Extremists, and Other Loose Ends": Old cartoons often get circulated anew after social media users recognize the seeming prescience (or enduring relevance) of the original work. For example, after Donald Trump was elected as U.S. president, people circulated a 1992 issue of MAD magazine that poked fun at him for boasting about his financial success despite filing for multiple bankruptcies.