The WWII icon alluded to the possibility that mankind might someday face an extraterrestrial foe. 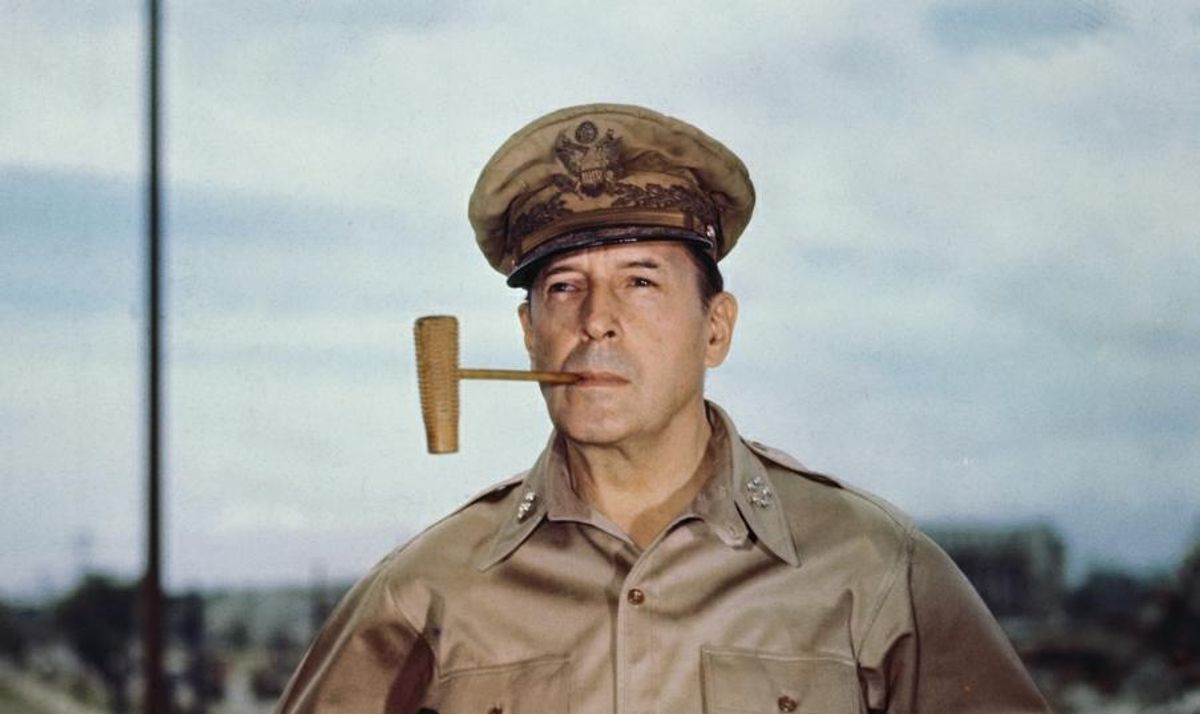 Claim:
During a 1955 speech at West Point, General Douglas MacArthur told assembled cadets: "The next war will be an interplanetary war. The nations of the earth must someday make a common front against attack by people from other planets."
Rating:

This item is a difficult one to classify: It's literally false as worded, because the person named didn't speak the specific words attributed to him at the time and place claimed (or at any other time and place). However, by combining things the same person said at different times and places, one could come up with a reasonable approximation of the original statement.

The subject here is a quote attributed to a 1955 West Point address by General of the Army Douglas MacArthur, in which the famous military man supposedly mused about the next war being an interplanetary one. That alleged quote has since been cited in a variety of works and web sites related to UFOs and extraterrestrials and still surfaces in newspapers and other publications from time to time:

In October 1955 General Douglas MacArthur told the cadets of West Point: 'The next war will be an interplanetary war. The nations of the earth must someday make a common front against attack by people from other planets.' The cadets must have wondered which planet MacArthur himself was from, but his fears were no more far-fetched than the current government-fed paranoia that millions of us are about to be murdered in our beds by Islamofascist superbiotoxins kept at readiness in a bedsit in Tipton and activated by psychotic double-amputees.

However, General MacArthur did not deliver a speech at West Point that year, nor is there any record of his specifically stating an opinion that the "next war" would be an "interplanetary" one.

The confusion started with comments reportedly made by MacArthur when he was paid a private visit at his residence in Waldorf-Astoria Hotel by the Mayor of Naples, Achille Lauro, in October 1955. The following day Mayor Lauro relayed the gist of their conversation to the press, maintaining MacArthur had expressed a belief that someday (perhaps as far as 1,000 years in the future) the people of Earth might find themselves facing an extraterrestrial confrontation:

General MacArthur described himself as "a confirmed optimist" regarding the possibility of another world war, Mayor Lauro said.

"He thinks that another war would be double suicide and that there is enough sense on both sides of the Iron Curtain to avoid it," the Mayor went on.

"He believes that because of the developments of science all the countries on earth will have to unite to survive and to make a common front against attack by people from other planets."

The politics of the future will be cosmic, or interplanetary, in General MacArthur's opinion, the Mayor continued. He quoted the military leader as saying that a thousand years from now today's civilization would appear as obsolete as the stone age.

According to Lauro, the only comments MacArthur made about the next war were that he had no idea what form it would take:

Some newspapers (such as the Chicago Tribune) played up the sensational aspects of Mayor Lauro's remarks, reproducing only a brief portion of them under headlines such as "MacARTHUR FEARS SPACE WAR."

Several years later, on 12 May 1962, MacArthur delivered a speech (commonly known as the "Duty, honor, country" speech) to the cadets of the U.S. Military Academy at West Point on the occasion of his receiving the Sylvanus Thayer Award, during which he once again alluded to the possibility that mankind might someday face an extraterrestrial foe:

We deal now, not with things of this world alone, but with the illimitable distances and as yet unfathomed mysteries of the universe. We are reaching out for a new and boundless frontier. We speak in strange terms of harnessing the cosmic energy, of making winds and tides work for us, of creating unheard of synthetic materials to supplement or even replace our old standard basics; to purify sea water for our drink; of mining ocean floors for new fields of wealth and food; of disease preventatives to expand life into the hundred of years; of controlling the weather for a more equitable distribution of heat and cold, of rain and shine; of spaceships to the moon; of the primary target in war, no longer limited to the armed forces of an enemy, but instead to include his civil populations; of ultimate conflict between a united human race and the sinister forces of some other planetary galaxy; of such dreams and fantasies as to make life the most exciting of all times.

So, General Douglas MacArthur did suggest the notion of an eventual interplanetary war on at least a couple of occasions; one of them was in 1955, and one of them was during a speech at West Point. But he never stated it would be the "next war" fought on (or by) Earth, or that it was likely to happen in any timeframe outside of the very distant future.