Fake news reports a Las Vegas couple was arrested for modifying their baby's ears to make them pointed like a Vulcan's. 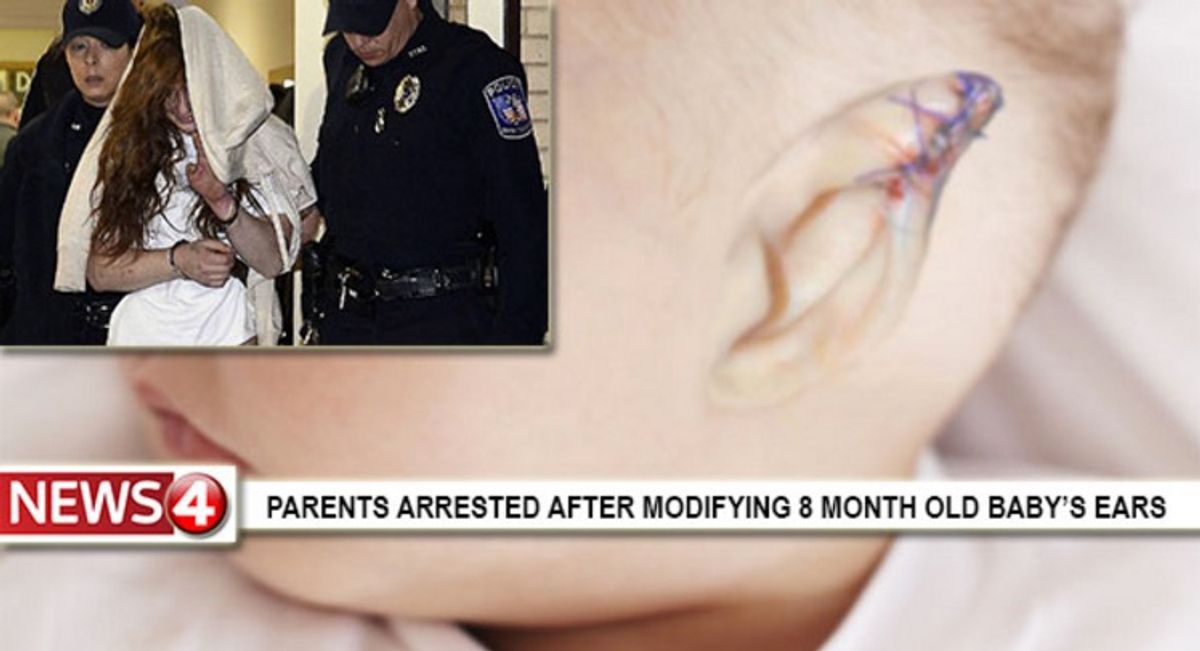 Claim:
A Las Vegas couple was arrested for modifying their baby's ears to make them pointed like a Vulcan's.
Rating:

On 18 June 2016, the web site News4KTLA published an article reporting that a Las Vegas couple had been arrested and charged with child abuse, child endangerment, and performing a surgical procedure without a license after attempting to modify their baby's ears into a pointed shape akin to those found on Vulcans in the fictional Star Trek universe:

A Las Vegas mom was arrested on Tuesday after an acquaintance called the police saying that the mother was doing body modifications on the child. 19-year-old Tonya Creighton says she was just trying to make her daughter look “cool” and meant no harm to the baby. Child Protective Services was called to the scene and the baby was removed from Creighton and put in their custody.

According to the anonymous tip made by Creighton’s acquaintance, the mother and the baby’s father, 22-year-old Brian Shekel gave the baby Benadryl to calm her down and applied a numbing agent to her ears. They then began the “Ear Pointing” surgery on the child, which is usually performed by a plastic surgeon at a cost of around $3000. According to the parents confession, they knew they would find no plastic surgeon willing to do it to the child and they “could not afford it because they had no jobs and their only income is welfare.”

“I don’t see what the big deal is,” said Creighton in her statement to the police. “That’s my child and I should have the right to do whatever I want to do with her. There was no harm done and everybody is doing it anyway and it looks cool. Our friend up the street did our ears and we didn’t need no plastic surgeon. It’s a family trait, and we wanted our daughter to have it.”

The article was nothing more than another clickbait fabrication from a fake news site, however. The story's social media popularity was likely due in part to the fake news site's appropriation of the call letters KTLA, which identify a legitimate Los Angeles television station.

News4KTLA (predictably) features no disclaimer warning readers its content is entirely fabricated — the site's "About" page merely says it features "local news for southern Louisiana and the surrounding area." News4KTLA is one of several fly-by-night fake news purveyors utilizing visual and call-letter elements to dupe social media users into spreading misinformation. Previous News4KTLA hoaxes included claims a woman cut off a rapist's genitals and fed them to him, the Flint water crisis was caused by corpses in the river, Dasani was recalled over "clear parasites" in the water, a teen died participating in a social media "masturbation challenge," and a man lost his penis during a rape due to the RapeX device.