Is 'Little Suck-a-Thumb' from a Real German Children's Book?

The purported German tale of a "great tall tailor" who cuts off children's thumbs was featured in a TikTok video and on Reddit. 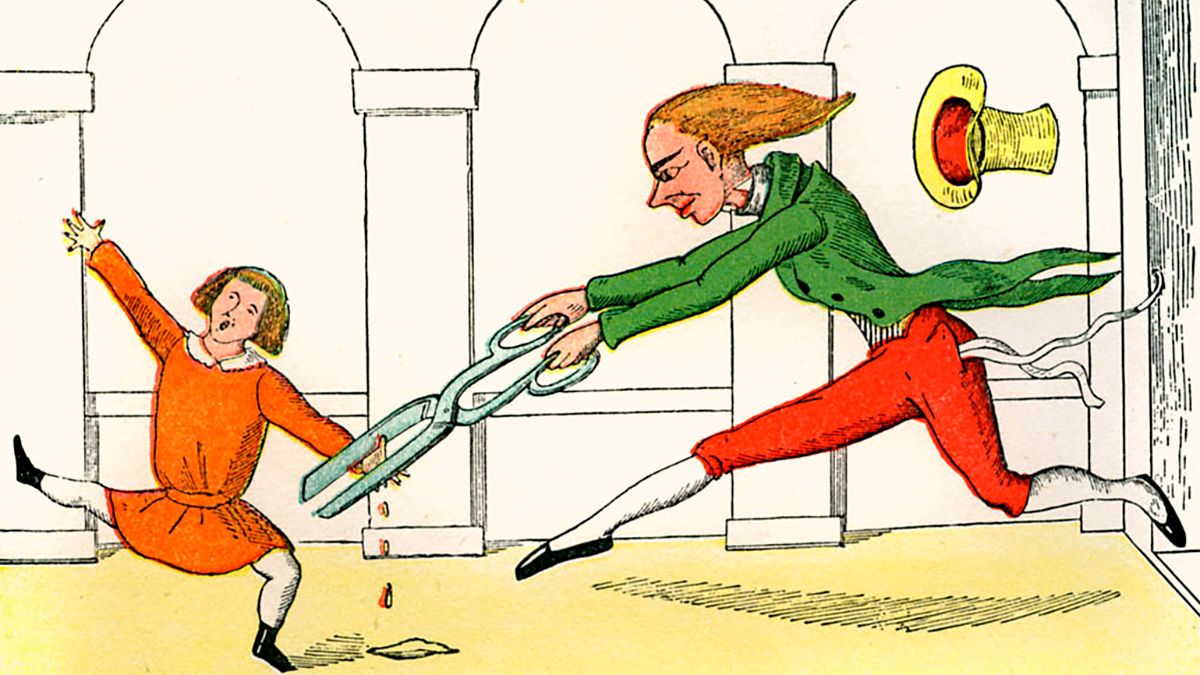 Claim:
"Little Suck-a-Thumb," a story about a "great tall tailor" who cuts off little kids' thumbs, is from a real German children's book.
Rating:

The video began with one of the men saying: "As Germans, we are naturally very funny." The other chimed in with: "We're raised with hilarious children's stories like 'Little Suck-a-Thumb.'"

The pair acted out a story where a mother tells a child to not suck his thumb. She tells him if he continues to do so, a tall tailor will cut it off. The mother leaves the room. Next, the tall tailor arrives and cuts off the child's thumb.

This is a tale from a real German children's book titled "Der Struwwelpeter." It was first published in 1845 and featured 10 stories written and illustrated by Heinrich Hoffmann. It is available for reading on the Virginia Commonwealth University website.

After the mother warns the boy, the "great tall tailor" arrives with his "great sharp scissors":

The door flew open, in he ran,
The great, long, red-legged scissorman.
Oh! children, see! the tailor's come
And caught our little Suck-a-Thumb.

In recent years, the strange tale has made its way into American popular culture. For example, there was this sequence from the cartoon TV series "Family Guy." In the clip, the mother cuts off the child's thumbs:

Dwight Schrute, a character on the American version of "The Office," also brought up "Little Suck-a-Thumb." The moment appeared during Season 2, Episode 18. The episode's title was "Take Your Daughter to Work Day." Schrute's character changed the tale for the little girls present in the room:

Dover Publications included a brief history of the book after it republished the tales in 1995:

First published in 1845, "Struwwelpeter" (variously translated as "slovenly" or "shock-headed" Peter) has become widely recognized as one of the most popular and influential children's books ever written. Heinrich Hoffman was a Frankfurt physician. Unhappy with the dry and pedagogic books available for children at the time, he wrote and illustrated "Struwwelpeter" as a Christmas present for his three-year-old son. The book relates in verse and pictures the often gruesome consequences that befall children who torment animals, play with matches, suck their thumbs, refuse to eat, fidget at meals, etc.

Written in rhyming couplets and illustrated by the author, the book was an immediate success. It has since gone through hundreds of editions and been published in almost every European language.

In sum, "Little Suck-a-Thumb" was indeed a story that appeared in a real German children's book.