After the Jan. 6 assault on the Capitol, social media users highlighted a photograph of Graham with Joe Biggs, who reportedly helped plan the right-wing group's activities on the day of the riots. 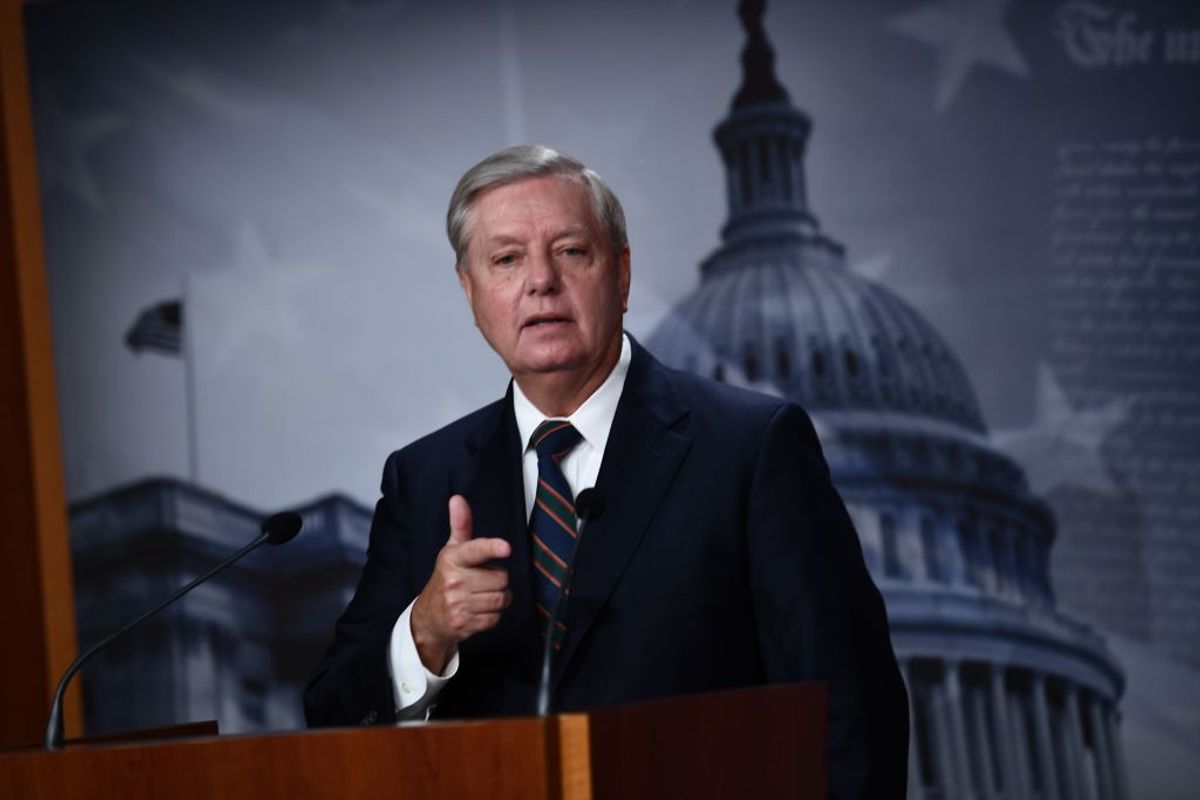 Graham posed for a photograph with Biggs in November 2019.

The description of Graham meeting Biggs "before Biggs helped organize an assault on the U.S. Capitol" likely gave many readers the mistaken impression that the two men met shortly before the Jan. 6, 2021, attack on the Capitol. In reality, the picture was taken more than a year earlier, in November 2019.

It's not clear whether Graham and Biggs had anything more than a fleeting encounter, or dined together. A spokesperson for Graham insisted he "does not know" Biggs, and said the picture was just "one of the tens of thousands of selfies Senator Graham has taken with individuals."

In the aftermath of the Jan. 6, 2021, attack on the U.S. Capitol by supporters of outgoing President Donald Trump and other right-wing elements, an old photograph reemerged online showing U.S. Sen. Lindsey Graham of South Carolina posing for a photograph with Joe Biggs, a prominent member of the right-wing Proud Boys group.

On Jan.12, Timothy Burke tweeted out the photograph, along with the following caption:

I feel like not enough has been made of Proud Boys leader Joe Biggs having dinner at the Trump hotel with Lindsey Graham before Biggs helped organize an assault on the U.S. Capitol? In advance of the attack on the Capitol, Biggs indicated he was coordinating the group's plans, and according to reports, he was the "lead coordinator" of the Proud Boys' actions on the ground that day. On Jan. 4, police in Washington, D.C., arrested Proud Boys leader Henry "Enrique" Tarrio on suspicion of destroying a Black Lives Matter banner taken from a historic Black church in Washington, a month earlier.

Tarrio was additionally charged with unlawfully possessing two high-capacity firearm magazines found in his vehicle during an arrest that the FBI said was linked to intelligence about plans for violence during the House and Senate certification of Electoral College votes on Jan. 6.

The photograph was authentic, and did indeed show Graham posing for a picture with Biggs in what a spokesperson for Graham acknowledged was likely a Trump hotel. However, Graham's spokesperson refuted Burke's claim that the two men were "having dinner," and the description of the photograph as being taken "before Biggs helped organize an assault on the U.S. Capitol" gave the mistaken impression that the two events were proximate in time.

In reality, the photograph was taken more than a year before the attack on the Capitol, and no evidence exists to suggest that Graham had any advanced knowledge of Biggs's plan. A spokesperson for the senator insisted Graham "does not know" Biggs.

Based on third-party social media posts, it appears Biggs originally posted the photograph to one of his Instagram accounts, @anticom3, during a visit to Trump's Washington, D.C. hotel on Nov. 7, 2019. That account has since been deleted, so we were unable to find a copy of the original picture. However, a Nov. 7, 2019, Twitter post included the photograph of Graham and Biggs, meaning it appears to have been taken earlier that day at the Trump International Hotel in Washington, D.C.

This means that Graham posed with Biggs for the photograph more than a year before the attack on the U.S. Capitol, contrary to the impression created by Burke's tweet, which ambiguously stated that the two men had met "before Biggs helped organize an assault on the U.S. Capitol" — a formula of words which likely suggested to many viewers that their meeting had taken place shortly before the Capitol attack. It did not.

The second questionable component of Burke's tweet was the claim that Graham and Biggs had dined together. The photograph does not demonstrate that. The "dinner" claim likely comes from the fact that, as part of the same series of photographs apparently posted to Instagram on Nov. 7, 2019, Biggs included a picture of his dinner plate, with the location "Trump International Hotel, Washington D.C." Biggs therefore ate dinner at the hotel, and met Graham there. That doesn't mean the two men ate together.

Graham's spokesperson also poured cold water on the "dinner" claim, telling Snopes in an emailed statement: "This is one of the tens of thousands of selfies Senator Graham has taken with individuals." The spokesperson added, emphatically, that Graham "does not know this individual and has spoken out against the Proud Boys."

Graham has indeed publicly criticized the Proud Boys in the past. In September and October 2020, the group briefly became the subject of intensive political focus, after they were mentioned during the first presidential debate between Trump and then-Democratic candidate Joe Biden on Sep. 29.

Biden and moderator Chris Wallace repeatedly asked Trump to condemn and disavow white supremacists and right-wing militias, which Trump failed to do during the debate. Pressed by Biden to specifically condemn the Proud Boys, the president stated ambiguously "The Proud Boys? Stand back and stand by, but I’ll tell you what, I’ll tell you what, somebody’s got to do something about Antifa and the Left..."

In response, Republican Sen. Tim Scott of South Carolina, who is Black, said "White supremacy should be denounced at every turn" and urged Trump to "correct" the record, adding "If he doesn’t correct it, I guess he didn’t misspeak.” Graham publicly endorsed Scott's position, explicitly and publicly criticizing the Proud Boys as "a racist organization antithetical to American ideals." Ultimately, Trump walked back his own words in a subsequent statement, saying, "I condemn the Proud Boys. I don’t know much about the Proud Boys, almost nothing. But I condemn that."