Do These Photographs Depict the Libyan Slave Trade? 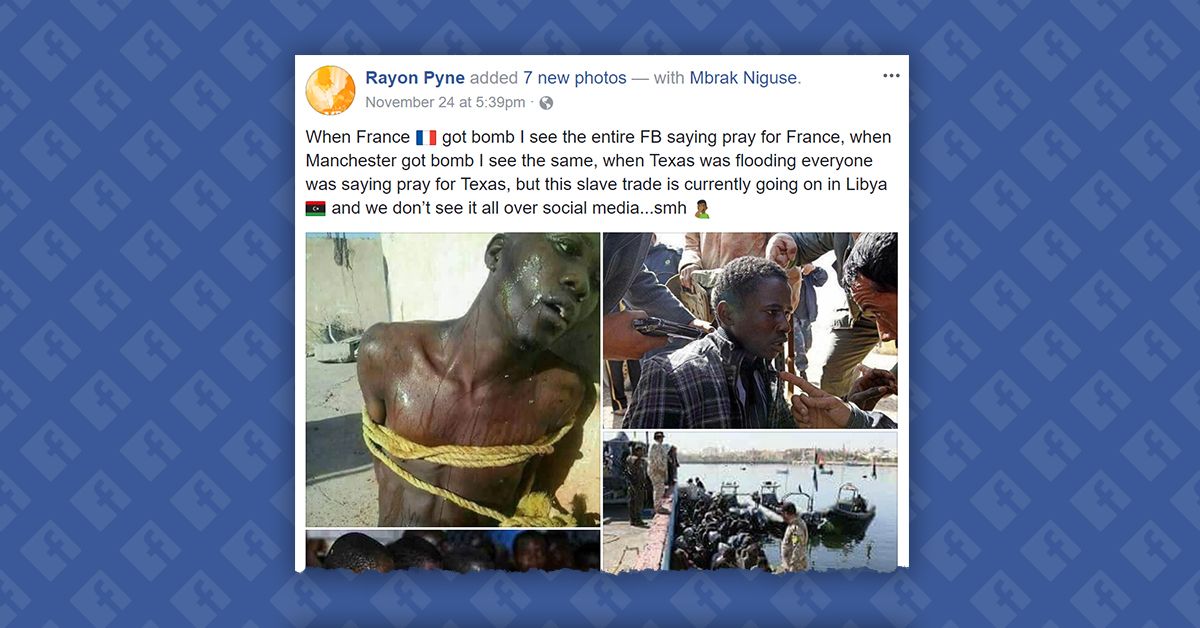 The terrible reality of slave-trading in Africa was brought home to millions of viewers and readers around the world in 2017 via two major media and NGO reports. In April, the United Nations' International Organization for Migration revealed that their staff had uncovered slave markets in Libya and Niger, where hundreds of young men attempting to migrate to Libya from elsewhere on the continent were being bought and sold.

And in November 2017, undercover footage of Libyan slave auctions obtained and broadcast by CNN sent shockwaves through African governments and international organizations such as the African Union and United Nations.

Within four days, the post was shared more than 428,000 times. We received several inquiries from readers about the authenticity of those photographs, and whether they were actually related to Libyan slave markets operating in 2017. We weren't able to pin down the original source of this particular image. It appeared in two posts on the Italian blog Social Popular News in February and May 2017. Those posts related to abuse and torture taking place at detention centers set up by Libyan authorities to house African migrants who were detained while trying to travel to Europe through Libya. In an August 2017 post on the Milano in Movimento blog, the image was credited to the award-winning Italian photographer Alessio Romenzi. However, we could not find corroboration for this attribution. This photograph has nothing to do with Libya or the slave trade there in 2017. In reality, it was taken in the Ivory Coast in April 2011 during unrest and violence following a presidential election in the country. Reuters staff took the photograph, which was published with the following caption:

Prisoners from a militia loyal to Laurent Gbagbo are held in a garage on the northern outskirts of Abidjan April 9, 2011. Forces loyal to Ivory Coast incumbent leader Laurent Gbagbo have stepped up a counter-attack on presidential claimant Alassane Ouattara by firing on his hotel headquarters in Abidjan. This photograph, also from 2011, shows rebels fighting against the former Libyan leader Colonel Muammar Gaddafi, holding at gunpoint young man whom they believed to be a pro-Gaddafi militant. Goran Tomasevic took the photograph, and the Reuters news agency published it on 3 March 2011. Two other photographs of the same scene can be viewed here and here. This image also does not show a slave auction. In reality, it's a photograph of African migrants sitting on a dock at the Libyan port of Tripoli in the spring of 2016. Mahmud Turkia took the photograph, which was published by Getty Images and the AFP news agency on 11 April 2016 with a caption reading:

Illegal migrants sit on the dock at the Tripoli port after 115 migrants of African origins were rescued by two coast guard boats at sea when their boat started sinking off the Libyan coast on April 11, 2016. This is another photograph from the 2011 Libyan Civil War. The image was part of a collection that won first prize in the "stories" category at the 2012 World Press Photo contest. According to the citation, the photograph was taken in Tripoli on 25 September 2011, and shows anti-Gaddafi rebels capturing a man suspected of being a mercenary for Gaddafi. We were unable to definitively identify the source of this image. It has been used repeatedly in articles about incidents and crises at prisons in Mali, Guinea, Cameroon, and Togo. The earliest instance we found dated to 2014, so it's clear that it does not depict the Libyan slave trade in 2017. The final image in the Facebook post is also of uncertain origins. The earliest instance we could find was a 25 October 2017 story on the Nigerian web site Tori.ng. The web site, relying on information from an unidentified Facebook user, says the men were attacked by young people after allegedly committing a crime:

Luck has ran out on some dreaded criminals after they were caught and severely dealt with by security operatives.  According to a Facebook user, the criminals who were caught from the eastern part of the country had invaded a home to unleash terror before luck ran out on them. They were tortured and beaten mercilessly by the youths before they were handed over to the police.

No doubt the slave trade was a real and disturbing phenomenon in Libya and Niger in 2017, as migrants from the rest of Africa passed through the country in an effort to reach Europe. The International Organization for Migration and CNN documented that in detail. However, there is no evidence the photographs in Rayon Pyne's viral Facebook post depict that slave trade. Five out of seven of the images are definitively unrelated to the subject.