Was Reka Gyorgy Banned by Twitter for Criticizing Lia Thomas?

A number of misleading and false claims were circulated after Lia Thomas became the first transgender athlete to win an NCAA Division I national championship. 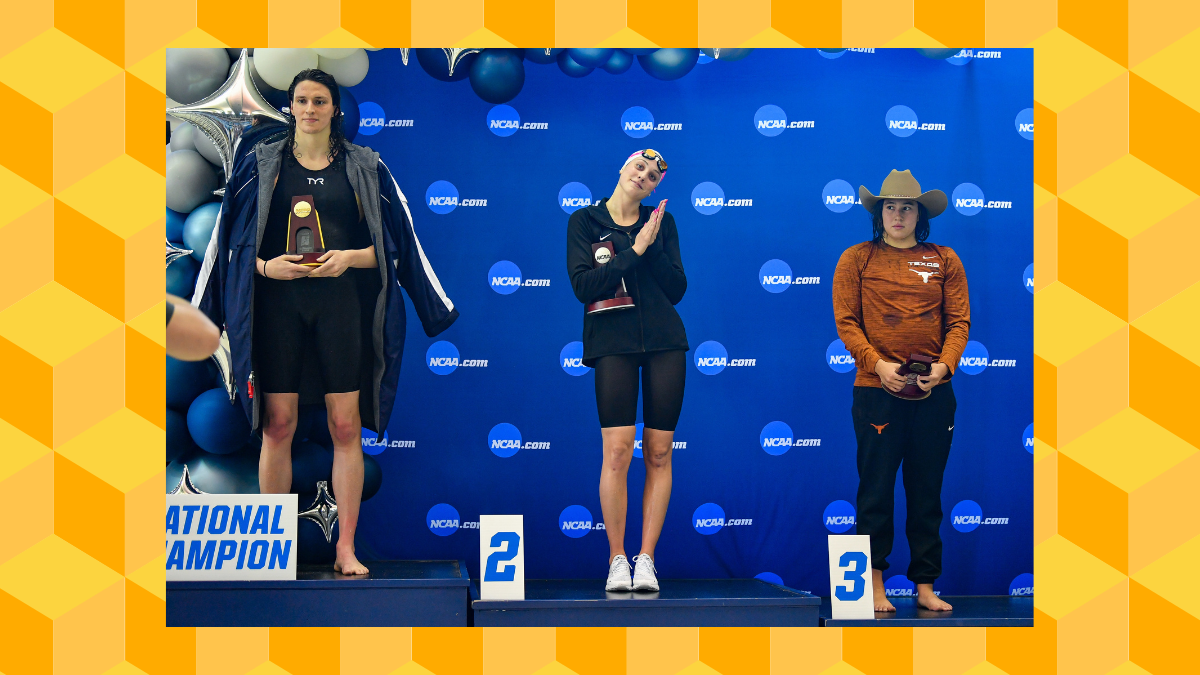 An imposter Twitter account posing as that of Virginia Tech swimmer Reka Gyorgy was suspended from the service after tweeting criticism of transgender athlete Lia Thomas. This account did not belong to Gyorgy. While the aforementioned claim is false, Gyorgy did release a statement critical of the NCAA, which you can read in full below.

In March 2022, false rumors were circulated on social media that Reka Gyorgy, a collegiate swimmer from Virginia Tech, had been suspended from Twitter after she posted criticism of Lia Thomas, a University of Pennsylvania swimmer who became the first transgender athlete to win an NCAA Division I national championship when she finished the 500-yard freestyle in four minutes, 33.24 seconds. This fake account posted a message calling on women athletes to boycott sports until transgender athletes are banned. The message -- which, again, did not come from Gyorgy -- read: "My finals spot was stolen by Lia Thomas, who is a biological male. Until we all refuse to compete nothing will change. Thanks for all the support retweets and follows I wont stop fighting."

When this account was banned for violating Twitter's rules against impersonating real people, social media users falsely claimed that Gyorgy was being censored by big tech.

While Gyorgy did not post these messages and was not banned from Twitter, the swimmer has released a statement regarding Thomas and the NCAA rules. In her statement, Gyorgy said that she respects and fully stands with Thomas, and that Thomas, like all of her fellow swimmers, worked hard and sacrificed in order to compete at such a high level. The swimmer did, however, criticize the NCAA's rules "that allow [Thomas] to compete against us, who are biological women."

Here's her statement in full:

My name is Reka Gyorgy from Hungary. I am a 2016 Rio Olympian, represented Virginia Tech for the past 5 years, a 2 time ACC Champion, 2 time All-American and 3 time Honorable Mention All-American.

With all due respect, I would like to address something that is a problem in our sport right now and hurting athletes, especially female swimmers. Everyone has heard and known about transgender, Lia Thomas, and her case including all the issues and concerns that her situation brought to our sport. I’d like to point out that I respect and fully stand with Lia Thomas; I am convinced that she is no different than me or any other D1 swimmer who as woken up at 5am her entire life for morning practice. She has sacrificed family vacations and holidays for a competition. She has pushed herself to the limit to be the best athlete she could be. She is doing what she is passionate about and deserves that right. On the other hand, I would like to critique the NCAA rules that allow her to compete against us, who are biologically women.

I’m writing this letter right now in hopes that the NCAA will open their eyes and change these rules in the future. It doesn’t promote our sport in a good way and I think it is disrespectful against the biologically female swimmer who are competing in the NCAA.

I swam the 500 freestyle at NCAA’s on March 17th, 2022 where I got 17th which means I did not make it back to the finals and was first alternate. I’m a 5th year senior. I have been top 16 and top 8 before and I know how much of a privilege it is to make finals at a meet this big. This is my last college meet ever and I feel frustrated. It feels like that final spot was taken away from be because of the NCAA’s decision to let someone who is not a biological female compete. I know you could say I had the opportunity to swim faster and make the top 16, but this situation make it a bit different and I can’t help but be angry or sad. It hurts me, my team and other women in the pool. One spot was taken away from the girl who got 9th in the 500 free and didn’t make it back to the A final preventing her from being an All-American. Every event that transgender athlete competed in was one spot taken away from biological females throughout the meet.

The NCAA knew what was coming this past week. They knew opinions and minds will be divided and chose to do nothing. This week has been more about reporters, media and division in our sport than things like two women going under 21 seconds in the 50 freestyle, 3 women going under 50 seconds in the 100 butterfly and the first women IN HISTORY to go under 49 seconds in the 100 backstroke. Thursday was not a specific athlete’s fault. I tis the result of the NCAA and their lack of interest in protecting their athletes. I ask that the NCAA takes time to think about all the other biological women in swimming, try to think how they would feel if they would be in our shoes. Make the right changes for our sport and for a better future in swimming.

The Philadelphia Inquirer notes that while Thomas became the first transgender athlete to win an NCAA Division I national championship, her performance wasn't record-breaking. In fact, her winning 500-yard freestyle performance was nine seconds slower than Katie Ledecky's performance in 2017.

This wasn't the only misleading or false claim to circulate in the wake of Thomas' victory. A photograph showing Thomas standing alone while three other swimmers posed for a picture was widely shared on social media as if it showed some sort of political statement. Erica Sullivan, one of the swimmers in the picture, attempted to correct the record by stating that she was simply taking a picture with two of her friends (all of whom competed together at the Olympics) and that she fully supported Thomas.

"Well… first NCAAs is over and boy was it interesting. Being subjected to false claims on Right Wing media due to this photo with my close Tokyo homies isn’t something that happens every day. Since the photo is still going around I thought it would be easier to post the photo that was intended along with another photo of me shaking Lia’s hand after her AMAZING 500free.

Truly couldn’t have gone through this chaos with out my amazing team who stood up for me when I felt like I was being misrepresented, and working as hard as they do to motivate me to do my best for Texas. Also a thank you to my amazing girlfriend who edited my piece with Newsweek supporting Lia. Would not have been able to sound as eloquent or powerful without her amazing mind and voice.

“Erica Sullivan Says There Was No Podium Protest After 500 Freestyle at NCAA’s.” SwimSwam, 19 Mar. 2022, https://swimswam.com/erica-sullivan-says-there-was-no-podium-protest-after-500-freestyle-at-ncaas/.