Did a GOP Candidate Insult a Parkland Shooting Survivor on Twitter? 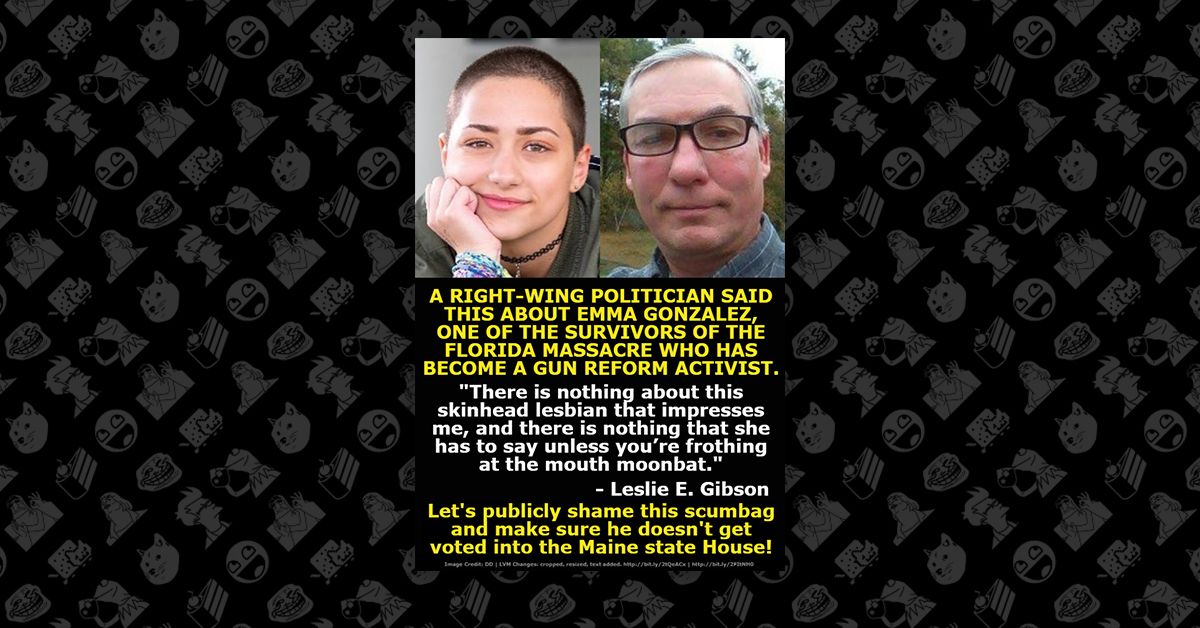 On 14 March 2018 the Facebook page Really American shared a quote-based meme asserting that a Republican candidate Maine's House of Representatives, Leslie Gibson, had described Parkland school shooting survivor and activist Emma Gonzalez as a "skinhead" and a "lesbian," among other things: The account from which Gibson sent the messages (@gibson_house) was protected as of 15 March 2018, but screenshots of several tweets Gibson had previously posted remained in online circulation:

The question for #mepolitics readers everywhere is: do they believe @gibson_house?

He has created many unthinkable Tweets for a "candidate", and some wonder if he just felt the pressure of seeing his thoughtless words plastered all over Twitter.#thedarthmuellereffect pic.twitter.com/I1Er0mUnoT

The 18-year-old whom Gibson singled out, Emma Gonzalez, is perhaps the most visible of the students from Marjory Stoneman Douglas High School in Parkland, Florida. In the wake of a massacre there that left 17 students or staff members dead, she has emerged as a leader in a students’ fight to make assault rifles harder to acquire.

“There is nothing about this skinhead lesbian that impresses me and there is nothing that she has to say unless you’re frothing at the mouth moonbat,” Gibson wrote.

Gibson said in another tweet that calling her a survivor, as many have done, is disingenuous because she “was in a completely different part of the school” when students were gunned down.

Gonzalez, who has a buzz cut, called herself a Cuban bisexual in a piece she wrote for Harper’s Bazaar. She also declared that she likes to draw, paint, crochet, sew and embroider, cannot pick a favorite color and watches Netflix.

“But none of this matters anymore,” she wrote. “What matters is that the majority of American people have become complacent in a senseless injustice that occurs all around them.

The other student whom Gibson has criticized and ridiculed, David Hogg, has also been outspoken in taking on the National Rifle Association.

Gibson subsequently issued an apology to Gonzalez via Twitter, which became inaccessible when his account was made private. The text of that apology read as follows:

A few days later, Gibson announced he was dropping out of the Maine House race:

Until his comments about the Parkland students gained national attention, Gibson was the only candidate who had declared for the seat, which is being vacated by term-limited Republican Rep. Stephen Wood, who is prevented from seeking re-election by Maine’s term limits law.

But [then] Democrats David Gilbert of Sabattus and Eryn Gilchrist of Greene, as well as Republican Thomas Martin, a former state senator who now lives in Greene, all entered the race.