President Lyndon B. Johnson supposedly made a crude racist remark about his party's voter base. There's little evidence to back it up. 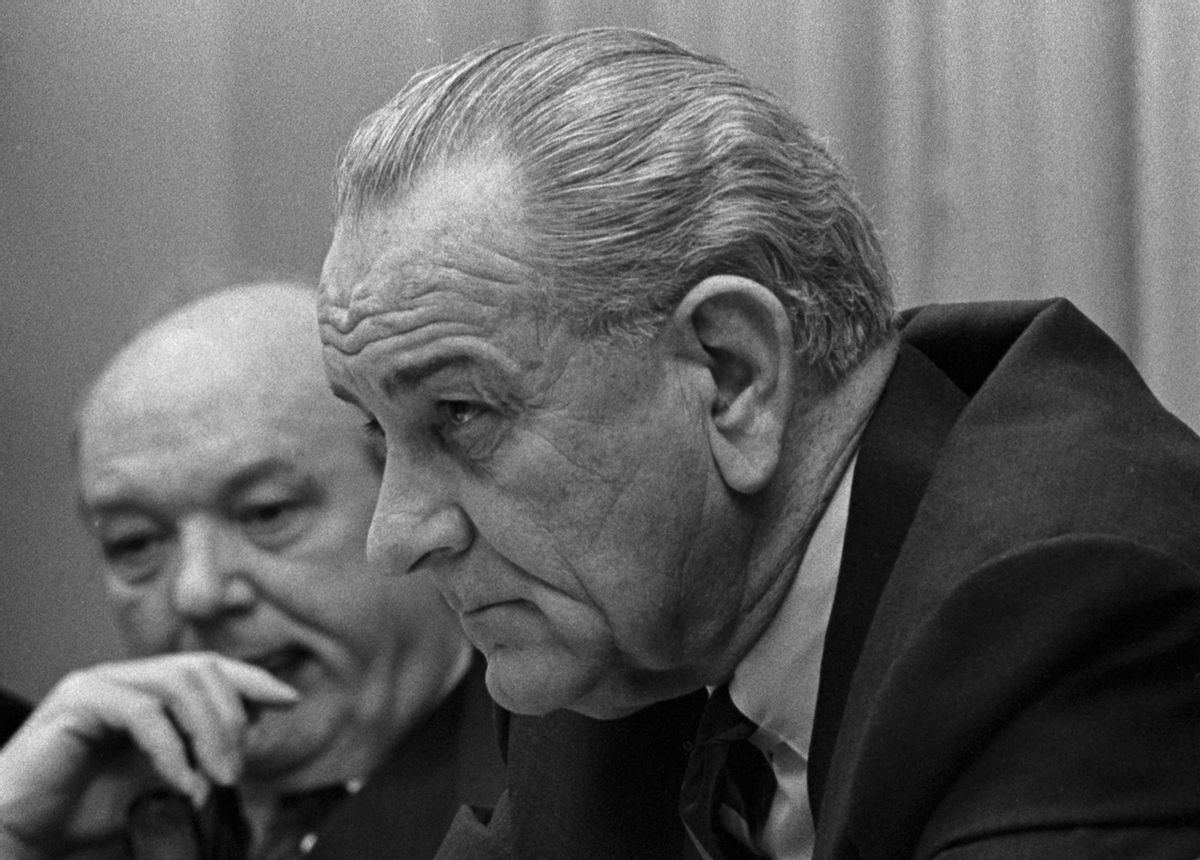 Claim:
President B. Lyndon Johnson once said, "I'll have those niggers voting Democratic for 200 years."
Rating:

A viral quote circulating since the 1990s attributes the following statement to Lyndon Baines Johnson, the 36th President of the United States: "I'll have those niggers voting Democratic for 200 years": We don't have a high degree of confidence that he actually said it, however.

There's no question that Lyndon Johnson, despite championing the landmark Civil Rights Act of 1964 and signing it into law, was also a sometime racist and notorious vulgarian who rarely shied away from using the N-word in private. For example, he reportedly referred to the Civil Rights Act of 1957 as the "nigger bill" in more than one private phone conversation with Senate colleagues. And he reportedly said upon appointing African-American judge Thurgood Marshall to the Supreme Court, "Son, when I appoint a nigger to the court, I want everyone to know he's a nigger."

According to historian Doris Kearns Goodwin, he also uttered this cynical-sounding statement, which sometimes circulates in tandem with the "voting Democratic" remark:

These Negroes, they're getting pretty uppity these days and that's a problem for us since they've got something now they never had before, the political pull to back up their uppityness. Now we've got to do something about this, we've got to give them a little something, just enough to quiet them down, not enough to make a difference. For if we don't move at all, then their allies will line up against us and there'll be no way of stopping them, we'll lose the filibuster and there'll be no way of putting a brake on all sorts of wild legislation. It'll be Reconstruction all over again.

To be fair, historians point out that sometimes — as in the case above, presumably — Johnson's more bigotry-laden statements were calculated to achieve a specific end, such as convincing his pro-segregation Dixiecrat colleagues that it was in their best interests to support civil rights legislation. MSNBC reporter Adam Serwer writes:

In Senate cloakrooms and staff meetings, Johnson was practically a connoisseur of the word. According to Johnson biographer Robert Caro, Johnson would calibrate his pronunciations by region, using “nigra” with some southern legislators and “negra” with others. Discussing civil rights legislation with men like Mississippi Democrat James Eastland, who committed most of his life to defending white supremacy, he’d simply call it “the nigger bill.”

But there were also instances of casual racism that can't be so easily rationalized. Biographer Caro also notes that Johnson is said to have replied as follows to a black chauffeur who told him he'd prefer to be called by name instead of "boy," "nigger" or "chief":

As long as you are black, and you’re gonna be black till the day you die, no one’s gonna call you by your goddamn name. So no matter what you are called, nigger, you just let it roll off your back like water, and you’ll make it. Just pretend you’re a goddamn piece of furniture.

All of which is to acknowledge that, without question, Lyndon Johnson used the N-word in private conversations. What is in question is whether Johnson in fact uttered this particular instance of it: "I'll have those niggers voting Democratic for 200 years."

The quote appeared for the first time anywhere on page 33 of Ronald Kessler's book, Inside the White House: The Hidden Lives of the Modern Presidents and the Secrets of the World's Most Powerful Institution, published in 1995:

Johnson, like other presidents, would often reveal his true motivations in asides that the press never picked up. During one trip, Johnson was discussing his proposed civil rights bill with two governors. Explaining why it was so important to him, he said it was simple: "I'll have them niggers voting Democratic for two hundred years."

"That was the reason he was pushing the bill," said MacMillan, who was present during the conversation. "Not because he wanted equality for everyone. It was strictly a political ploy for the Democratic party. He was phony from the word go."

The "MacMillan" referenced above was Ronald M. MacMillan, a former Air Force One steward Kessler interviewed for Inside the White House. The steward provided many of the juiciest tidbits in a relentlessly juicy compendium of gossip, including the revelation that Johnson liked to parade around without his clothes on:

MacMillan said Johnson did not care if women were in the area. "He was totally naked with his daughters, Lady Bird, and female secretaries," he said. "He was quite well endowed in his testicles," MacMillan said, "So everyone started calling him Bull Nuts. He found out about it. He was really upset."

Other sources have corroborated Johnson's predilection for casual nudity, so we don't need to dwell on it, but the fact remains that not all of Ronald MacMillan's anecdotes, when checked, check out. For example, Luci Baines Johnson flatly denied MacMillan's claim that when she was a teenager she once screamed at him to go "Find my nigger" (i.e., her servant) and threatened to slap him if he didn't.

"This was the attitude of these people who were championing civil rights," Kessler quotes MacMillan as saying.

But when asked for her version of events, Luci Johnson wrote, "I do not now, nor have I ever, subscribed to such feelings or such language and therefore could not use it."

LBJ's comment about black people voting Democrat was supposedly uttered to two unnamed governors traveling with the president on Air Force One, but we only have one source — MacMillan, who claimed he overheard the exchange — and no corroboration from anyone else. And then there's MacMillan's editorializing: "It was strictly a political ploy for the Democratic party. He was phony from the word go." And: "This was the attitude of these people who were championing civil rights."

It's not just that MacMillan gives the appearance of being a biased witness, but also that his cynical portrait is at odds with historical evidence showing that by the time Johnson took office after JFK's assassination, he was fully committed to Kennedy's civil rights legislation. Some of this evidence can be found in LBJ's oval office recordings, in which he can be heard fighting for its passage. Eric Foner writes in the New York Times Book Review:

One example of genuine idealism that does come through in these volumes is Johnson's commitment to civil rights. When he took office, nobody expected that he would identify himself with the black movement more passionately than any previous president. But from his first days in office he urged black leaders, labor officials and businessmen to lobby Congress for passage of the stalled civil rights bill. He asked Robert Anderson, a member of Eisenhower's cabinet, to work on Republicans: "You're either the party of Lincoln or you ain't.... By God, put up or shut up!"

Lastly, the historical evidence suggests that far from being concerned about securing future generations of black votes, one of Johnson's main worries -- which, to his credit, didn't prevent him from pushing for passage of the Civil Rights Act of 1964 — was losing the votes of white Southerners. His former press secretary, Bill Moyers, recounted this scene in his 2004 book Moyers on America:

When he signed the act he was euphoric, but late that very night I found him in a melancholy mood as he lay in bed reading the bulldog edition of the Washington Post with headlines celebrating the day. I asked him what was troubling him. "I think we just delivered the South to the Republican party for a long time to come," he said.

Circling back to the quote with which we started, it wouldn't have been entirely out of character for LBJ to have said something like, "I'll have those niggers voting Democratic for 200 years," but on balance we have to question its authenticity.