Much like the email forwards of the late 1990s and early 2000s, we don't recommend placing blind trust in social media posts. 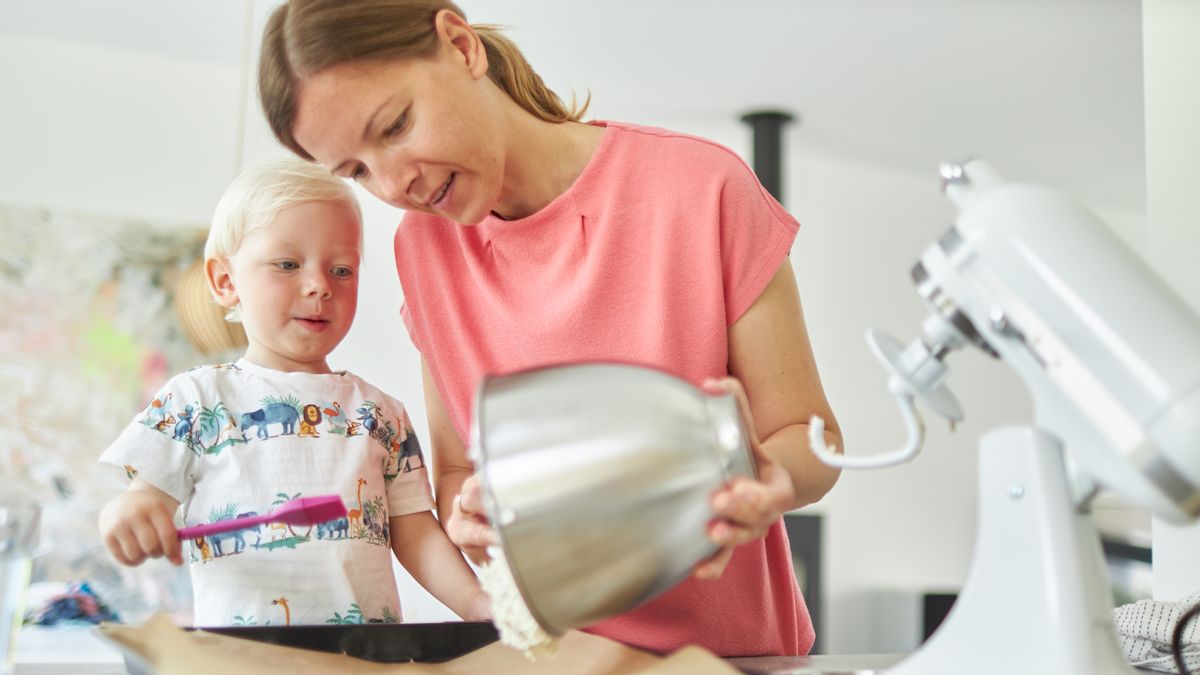 Claim:
Whirlpool Corporation and KitchenAid recalled attachments for its popular stand mixers due to "extreme amounts of lead."
Rating:

In January 2023, we received reader mail that asked about a purported recall of KitchenAid stand mixers, apparently due to lead concerns associated with "white paddles and hook attachments." This rumor appeared to stem, at least in part, from blogs.

Here's what we know: We've found no evidence that Whirlpool Corporation, which owns the KitchenAid brand, has issued any recalls of the components for the mixers due to lead or anything else at all. From everything we could gather, no current recalls, recent recalls, or quality initiatives existed for the product.

In terms of KitchenAid mixers containing lead, we found that the company had made mention of customer concerns on social media in the months and years prior to this current controversy. All of this data is documented below, as is a list of questions we sent to the company.

As readers are no doubt aware, one place that a lot of rumors spread, this one included, is on social media.

One Facebook post from Jan. 22 appeared to report the news of a lead recall for KitchenAid mixer components, specifically "white paddles" and "hook attachments." As of Jan. 24, it had more than 30,000 shares, which perhaps meant that it had been seen by at least hundreds of thousands of users. 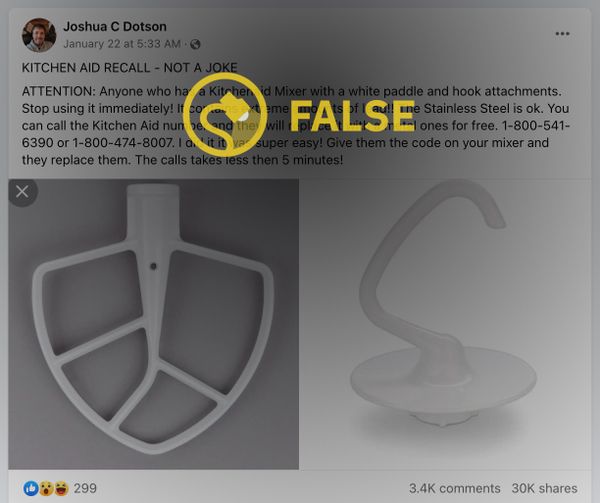 There was no recall.

Here's what the post falsely claimed about there being a recall for the stand mixer attachments:

KITCHEN AID RECALL - NOT A JOKE

ATTENTION: Anyone who has a Kitchenaid Mixer with a white paddle and hook attachments. Stop using it immediately! It contains extreme amounts of lead!! The Stainless Steel is ok. You can call the Kitchen Aid number and they will replace it with a metal ones for free. 1-800-541-6390 or 1-800-474-8007. I did it it was super easy! Give them the code on your mixer and they replace them. The calls takes less then 5 minutes!

Bear in mind that this single post was just one of a seemingly endless number of others, some of which also each had thousands of shares.

In other words, this rumor was spreading like wildfire, despite there being no evidence or sources included with the posts.

As can be seen on the Whirlpool Corporation website, no current or recent recall existed for anything involving KitchenAid mixers.

In January 2023, users who asked the company about the rumor of lead in its mixer attachments received a brief response from KitchenAid customer support.

On the company's social media pages, and apparently also over the phone, customers were told the following:

Throughout our 111-year history, Whirlpool Corporation has been committed to providing safe products for our consumers.

The company's aluminum alloy stand mixer accessories, including beaters, dough hooks, and whisks, are tested through a third-party, independent laboratory to ensure they comply with all applicable regulations in the locations where they are sold regarding lead content. They are safe for any family's cooking needs.

In addition, all current models of aluminum stand mixer accessories have a food-safe coating over the aluminum that is tested both for lead content and lead migration to ensure that it is safe for all consumers.

Here's an example of how the company was responding on Twitter with an image that contained the statement:

A slightly different statement was shared with a customer back in November 2022.

In this case, the statement mentioned California's Proposition 65, which the company also mentioned on its website.

Note: The long name for Prop 65 is the Safe Drinking Water and Toxic Enforcement Act of 1986.

Here's the statement, which we've combined into one paragraph after it was originally spread out into three tweets:

Proposition 65 requires warning labels on any product that may contain or produce any of the 600-plus elements that the California Air Resources Board considers carcinogenic or a reproductive toxicant. These elements include lead (contained in the solder used to attach electronic parts to the printed circuit boards), brass, PVC and a multitude of other everyday elements and gas products burn fuels (natural gas or propane) that contain trace levels of chemicals on the list. This list also contains a wide range of naturally occurring and synthetic chemicals, including common household products, foods, drugs, dyes and solvents.

Additionally, back in November 2020, the company responded to a man who asked, "Do you have stand mixers that are lead-free?"

In their answer, KitchenAid customer support responded with, "Unfortunately, we do not, the stand mixers have lead (contained in the solder used to attach electronic parts to the printed circuit boards)."

Our Questions to KitchenAid

By email, we contacted MSL Group, the public relations firm for KitchenAid products. We posed a series of questions.

For example, we inquired about the false rumor of an announced recall of KitchenAid mixer attachments. We also asked about the purported dangers of the product supposedly containing hazardous amounts of lead.

As of four hours after our email was sent, we had not yet received a response. However, we will be sure to update this article if answers arrive.

Suthivarakom, Ganda. "What Is Prop 65? And Why Is There a Warning Label on This Thing I Bought?" Wirecutter: Reviews for the Real World, 10 Mar. 2020, https://www.nytimes.com/wirecutter/blog/what-is-prop-65/.