Does Video Show Charles' Security with Fake Arms and Hands?

A TikTok video with tens of millions of views claimed that "inanimate" hands were visible for the king's security detail as he greeted well-wishers. 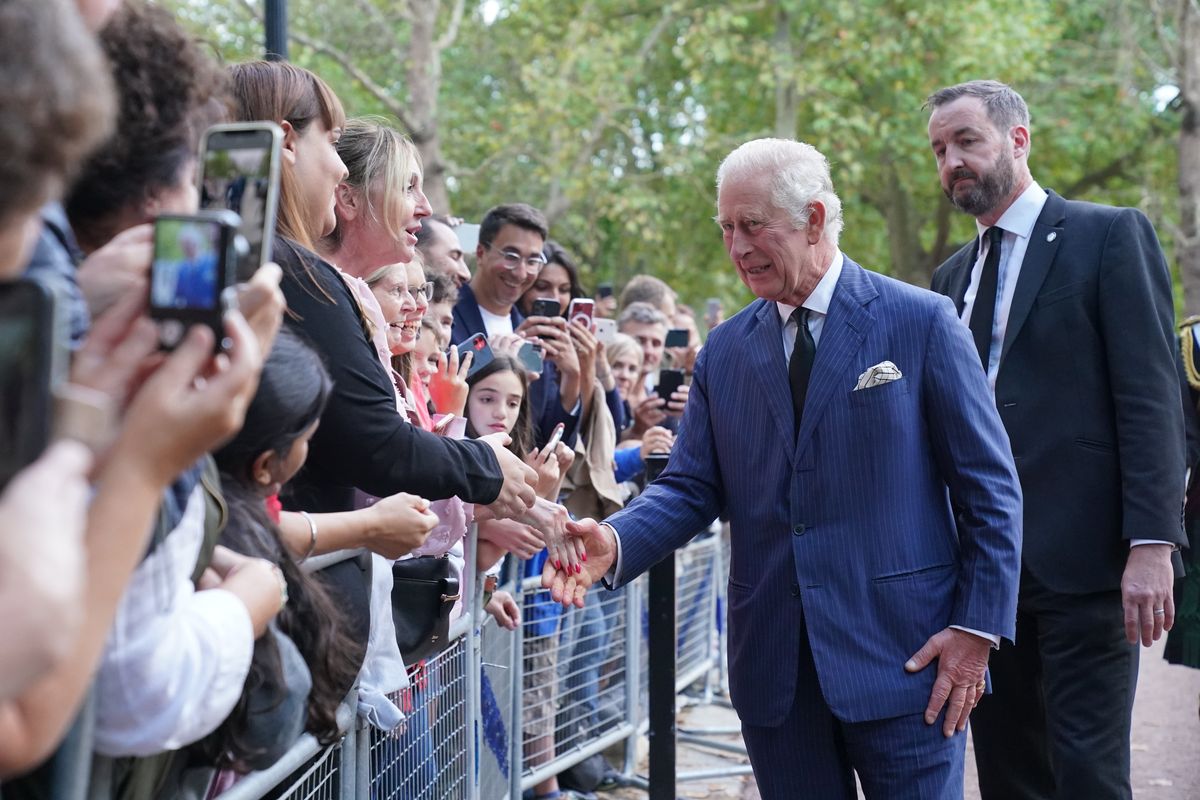 Claim:
A video from Sept. 9, 2022, shows that members of King Charles III security detail were using fake arms and "inanimate" hands so they could secretly keep their real hands on concealed guns.
Rating:

On Sept. 16, 2022, a TikTok video was posted that asked, "King Charles' security: Do some have fake arms, hand on guns?" The clip was seen nearly 30 million times in less than one week. However, it was quite misleading.

Here's how this all started. The moment that appeared in the video occurred on Sept. 9. On that day, King Charles III and his wife, Queen Consort Camilla, stopped just outside of the gates of Buckingham Palace to greet well-wishers. The crowd had gathered following the death of Queen Elizabeth II, who had died the day before.

The video claimed to show something strange happening with two men who were purportedly with Charles' security detail. According to the clip, the two men referred to as "the man on the left" and the "taller man" were using "fake arms" so that they could keep their real hands on concealed firearms.

The text in the video read as follows:

King Charles' security: Do some have fake arms, hand on guns? The man on the left. The hand he's holding looks suspicious. It looks to be inanimate. Then this taller man, one of his arms also looks fake. Notice the different grips. That open-palm grip doesn't change at all. Also looks like a bulge in the jacket. Still no change and the strange swing.

Here's how we know the TikTok video was misleading. The person referred to in the video as "the man on the left" can be seen for one second on the very left side of the screen at the 1:52 mark in this video from Sky News.

For that brief moment at the 1:52 mark (again, on the very left side of the screen), one of the fingers on the man's left hand was extended. This was the same hand that the TikTok video claimed was "inanimate," which was false.

Further, we have so far found no evidence that "the man on the left" in the TikTok video was part of a security team. He didn't appear to be intently watching the crowd for any potential threats, nor was he pictured near Charles in a wider shot beginning at the 8:53 mark in the Sky News video.

As for the second person who was referred to as the "taller man" in the TikTok video, he was visible in the Sky News video (above) at the 5:46 mark. At that moment, he could be seen collecting bouquets of flowers from the crowd with both of his arms and hands. This was an unlikely task for someone deemed by the conspiratorial TikTok video to be a "security" official.

A video from Voice of America showed additional footage of the same "taller man" collecting flowers with both of his arms and hands:

In sum, we found no evidence that members of Charles' security detail used fake arms or hands during his greeting of well-wishers on the day following the queen's death. We also found no reporting or proof showing that the two men mentioned in the TikTok video were even part of a security team.