Did Florida State Rep. Kimberly Daniels Once Say, 'I Thank God for Slavery'?

The Jacksonville Democrat's pronouncements as a preacher came under intense scrutiny in 2018. 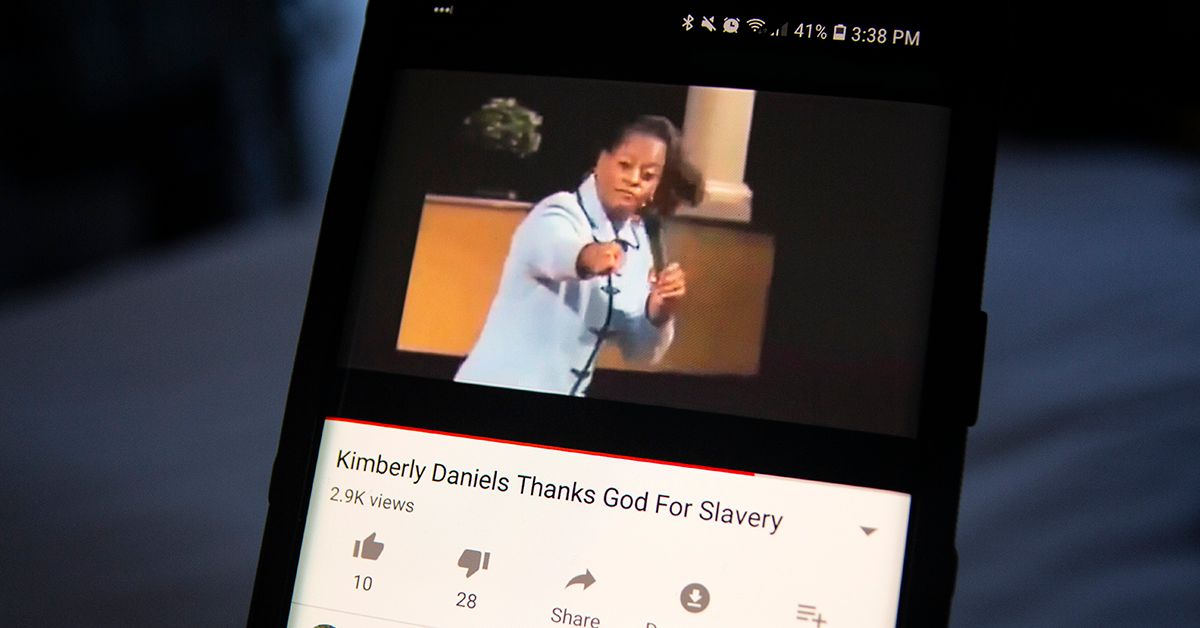 In 2018, Democratic Florida State Rep. Kimberly Daniels garnered national attention for introducing legislation that would require public schools throughout the state to prominently display the U.S. motto "In God We Trust":

Daniels' bill was passed by the Florida House, but it failed to clear the Senate Education Committee. However, the "In God We Trust" requirement was later included in a spending bill signed into law by Republican governor Rick Scott in March 2018.

The focus on Daniels' proposal prompted scrutiny of her own controversial background as a Christian pastor who preached about demonic possession, claimed that Halloween candy was "prayed over by witches," and virulently opposed inclusiveness towards the LGBT community.

In March 2018, the website Patheos drew attention to one explosive proclamation of Daniels' in particular, reported in an article headlined "Black Florida Lawmaker Thanks God for Slavery":

Florida State Rep. Kimberly Daniels thanks God for slavery, claiming “if it wasn’t for slavery, I might be somewhere in Africa worshiping a tree.”

That article cited an earlier Facebook video posted by the Freedom from Religion Foundation:

The quotation is authentic. In 2008, Daniels delivered a guest sermon at the Solid Rock Church in Monroe, Ohio. The description under a YouTube video of the sermon states that it took place in October 2008. Although we were unable to verify that date, Daniels' references to the ongoing U.S. presidential campaign could well be in keeping with it.

A short excerpt from the sermon can be viewed below:

During her sermon, Daniels addressed the issue of race and religion, encouraging the black members of the congregation to self-identify primarily as Christians rather than as African-Americans, and to eschew the liberal policies of the Democratic party (which she would represent as a member of Jacksonville City Council less than three years later, and which she currently represents in the Florida state House of Representatives).

Daniels' reference to "the crack house" was an allusion to her own purported past as a drug addict and sex worker. Immediately after the section of her speech in which she said "I thank God for slavery," Daniels then made another statement that subsequently provoked outrage and allegations of anti-semitism:

And you can talk about the Holocaust, but the Jews own everything. We go through some things, but let me tell you something -- when you go through, you qualify to get paid back. You don't need the government to give it back, God will give it back.

The complete sermon, which sets Daniels' "slavery" remarks in full context, can be viewed here. We asked Daniels' whether there was any background to her remarks that readers ought to be aware of, and whether she stood by or retracted her view that she 'thanks God' for slavery but did not receive a response in time for publication.

Daniels, Kimberly.   "Why the Church Condones Homosexuality in the Pulpit."     Charisma Magazine.   14 January 2013.