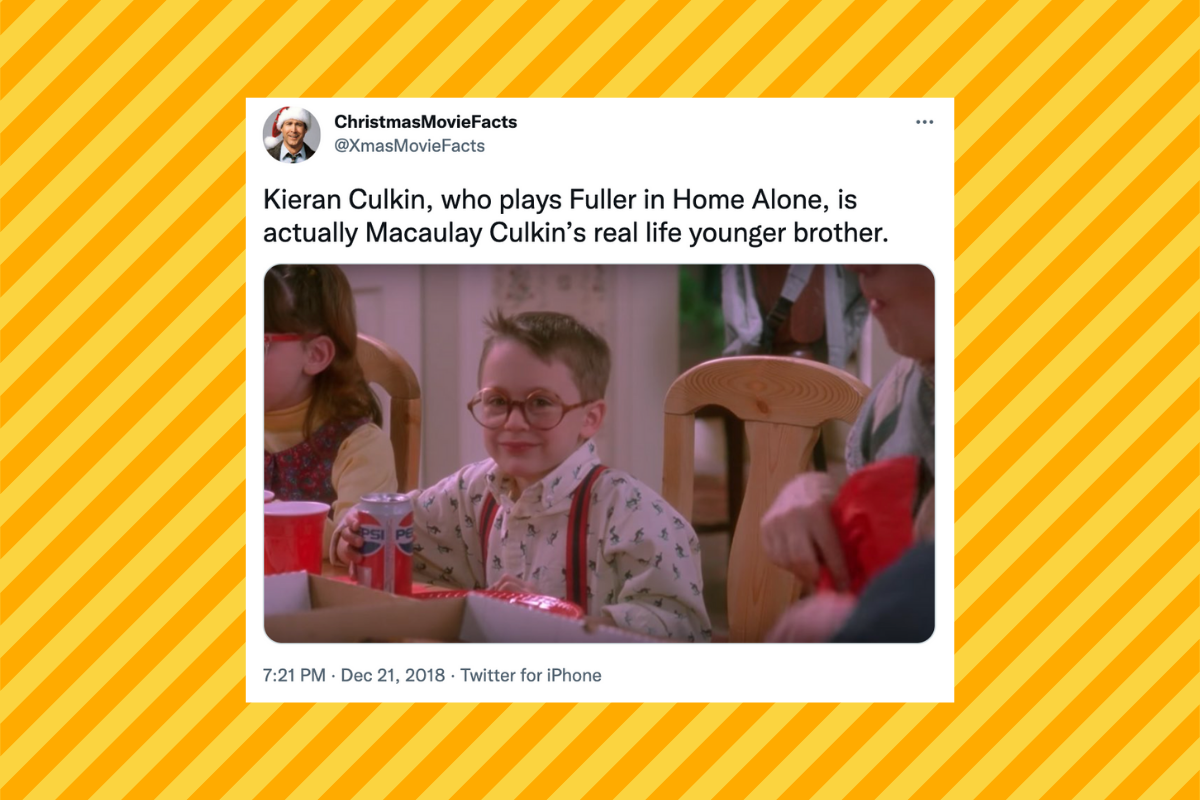 Now deemed a holiday staple, "Home Alone" tells the story of the misadventures of Kevin, one of 11 children who was accidentally left at home when his family went on a Christmas vacation. And as the holiday season rolled around in 2021, some social media users pointed out that there was more to the behind-the-scenes lives of the actors that made up the fictional McCallister family.

One such claim suggested that cousin Fuller was played by Kieren Culkin, the real-life younger brother of Macaulay Culkin.

This claim is true. The factoid was first shared to Twitter in December 2018 by the ChristmasMovieFacts, handle @XmasMovieFacts, and in the years since has been shared by other popular social media accounts, like @iamthirtyaf.

A look at the cast list on the Internet Movie Database (IMDb) showed that Kieran Culkin, who played Kevin's cousin Fuller in "Home Alone," is indeed the younger Culkin sibling. According to IMDb, Kieran had one significant line in the first "Home Alone":

A cross-reference of the young brother on IMDb profile also confirmed that the actor is one of six Culkin children. He would have been around 8 years old at the time of the release of the 1990 Christmas classic — two years younger than his IRL brother. Snopes also watched the classic and found that Kieran made his debut in the film just before the 8-minute mark. According to Entertainment Weekly, the part earned Kieran his first feature film credit.

Kieran also made an appearance in the sequel, "Home Alone 2: Lost in New York." A photograph hosted by Getty Images showed the two brothers at the premier in 1992, when the boys would have been 10 and 12 years old. "Culkin's real-life little brother, Kieran, portrayed his annoying cousin Fuller, in the Home Alone films. He has since starred in the Father of the Bride franchise, She's All That, Scott Pilgrim vs. the World, Quitters and Infinity Baby," wrote US Magazine in November 2021.

"Kieran appeared on Go Fish and a few episodes of Long Live the Royals before playing Roman Roy on Succession, which earned him both an Emmy and Golden Globe nomination in 2020."

If you want to see for yourself, "Home Alone" can be streamed throughout the holiday season on Disney+.

"'Home Alone' Cast: Where Are They Now?" Us Weekly, 16 Nov. 2021, https://www.usmagazine.com/entertainment/pictures/home-alone-cast-where-are-they-now/.