Did Kevin Garnett Say 'If You Can't Win Alone, You're Considered a Bum?'

Twitter users were quick to point out that K.G. played with Paul Pierce and Ray Allen. They weren't quick to check if the quote was real. 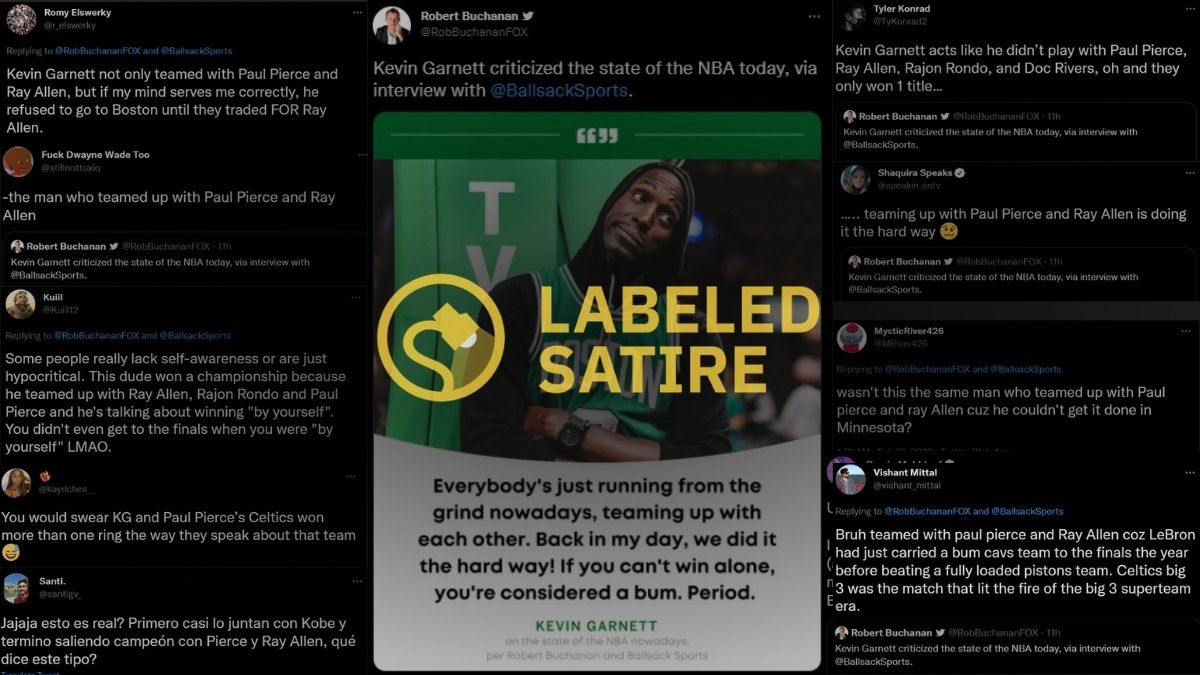 Claim:
Former NBA player Kevin Garnett said: "Everybody's just running from the grind nowadays, teaming up with each other. Back in my day, we did it the hard way! If you can't win alone, you're considered a bum."
Rating:

On Feb 16, 2022, NBA fans were a bit bewildered when they came across a quote ostensibly uttered by former Boston Celtics player Kevin Garnett about how modern NBA players were "bums" for seeking out super teams. Garnett supposedly said: "Everybody's just running from the grind nowadays, teaming up with each other. Back in my day, we did it the hard way! If you can't win alone, you're considered a bum."

Fans were quick to point out the seeming hypocrisy in K.G.'s statement, noting that he had also teamed up with high-caliber players such as Ray Allen, Rajon Rondo, and Paul Pierce. There was one big problem with this controversy, however. This wasn't a real quote from Garnett. This quote originated with "Ballsack Sports," a parody sports account. In addition to this Twitter accounts reference to genitalia, this satire site can also be abbreviated as "BS Sports," or "bull sh*t sports."

The above-displayed quote originated with an account for "Robert Buchanan," a reporter with "Ballsack Sports." We doubt that this person's name is genuine, however, as their profile picture appears to show a marketing consultant named Leon Fields. While the photo may be a ruse, the Twitter bio does state that it's a parody account: In addition to the dubious source of this quote, this account has posted two tweets acknowledging that the internet fell for its latest work of fiction. As this Garnett quote went viral, they wrote: "This account just proves how easy it is to fool people ... I genuinely feel bad for people who take everything on the internet as fact #robbomb."