Did a Kentucky Man Clear Driveway of Snow Using a Flamethrower?

It’s a scene straight out of a "National Lampoon's" flick. 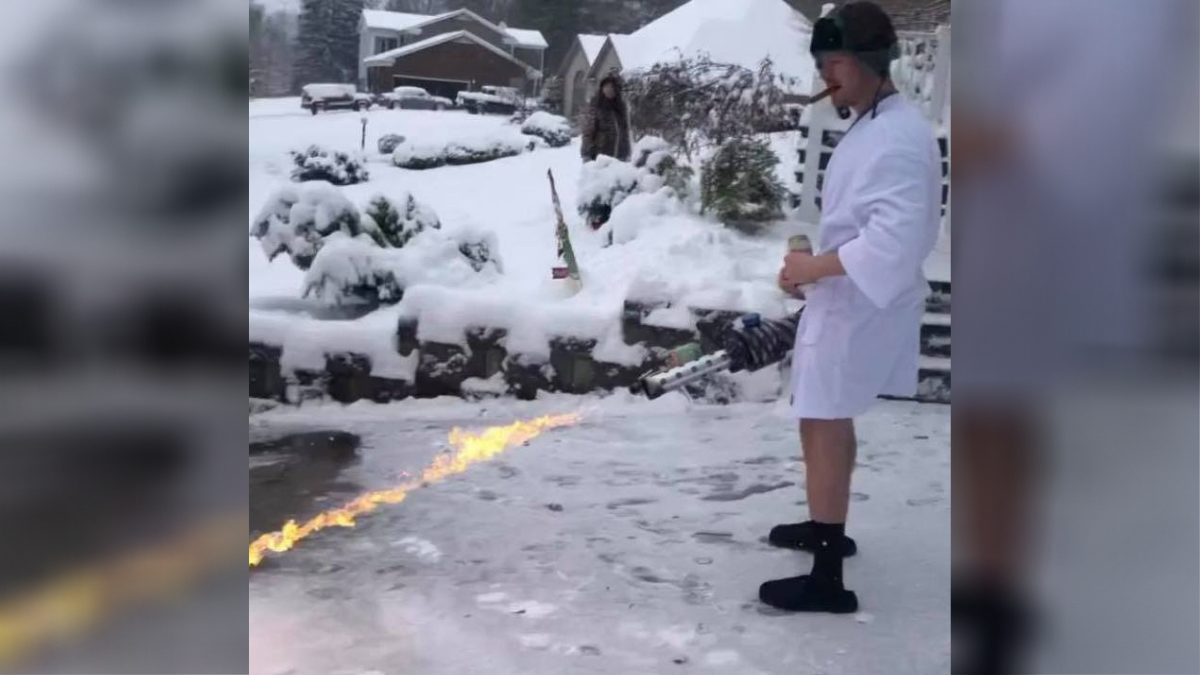 Claim:
A Kentucky man dressed as Cousin Eddie from the holiday classic “National Lampoons Christmas Vacation” used a flamethrower to remove snow from his driveway.
Rating:

Dressed as Cousin Eddie from the holiday classic “National Lampoons Christmas Vacation,” a Kentucky man wearing a ushanka hat, bathrobe, socks, and slippers subbed out his snow shovel for a flamethrower over the 2020 Christmas holiday weekend.

Several videos shared to Facebook on Dec. 25 showed Timothy Browning — a self-described husband, father, and flight nurse — melting snow from the driveway as he chugged what appeared to be a beer.

“Some people use a shovel, others use a flamethrower!!” wrote Facebook user Jordan Podunavac, who shared a video of Browning from across the street. At the time of Snopes publication, the now-viral video had received more than 45,000 likes interactions on the social media platform, and had been featured in a number of news publications, from Fox to Yahoo. The video was even posted on actor Will Smith's personal Instagram page, where it received more than 11 million views.

“Browning Snow Services Removal, now available,” said the person filming in the second set of videos. “And that’s how you clear a driveway.”

Snopes contacted Browning, who said that he did not obtain any sort of special permits to use his handheld flamethrower and that its use was legal to the best of his knowledge. According to flamethrower manufacturer XM42-M — which is not the same brand Browning used — it is legal to own flamethrowers in 48 states, excluding California and Maryland. However, the company suggests that individuals hoping to purchase a flamethrower first check with their local laws and ordinances.

Surprisingly, the flamethrower was an effective strategy at removing snow. When asked if the melted snow refroze, Browning confirmed that it had not.

“[The flame] is shooting out at over 1,000 [degrees]. It absolutely vaporized whatever it touched,” he told Snopes.

Browning said that he normally starts campfires with the flamethrower, but finding a reason to use it in the winter was a plus.

“My son and I scraped off the snow with shovels earlier, but there was still a thick layer of ice. My grandmother and mother were coming over, and we didn’t want them to fall,” he said. “I figured, why not try this? It worked great.”

As to his slumber party attire, Browning said that he was “100%” inspired by Cousin Eddie.

“Our Christmas party this year was cut short due to COVID, and this was my outfit for it. I figured I’d wear it so my wife, kids and friends would get a kick out of it,” he said.