"It is with heavy heart that I must concede to my opponent, Katie Hobbs," the parody tweet read. 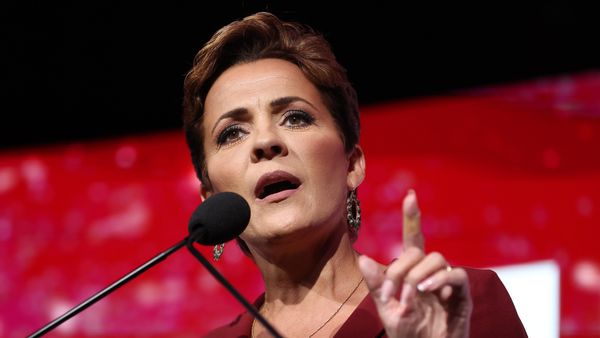 On Nov. 11, 2022, a user behind a Twitter account with the handle @KariLakeAZ (or @KarilakeAZ with a capital "i") displayed a "verified" checkmark and the picture and name of Arizona Republican Kari Lake. The user impersonated Lake and tweeted that she had conceded to Democrat Katie Hobbs in the state's gubernatorial race.

The tweet read, "It is with heavy heart that I must concede to my opponent, @katiehobbs. We didn't get the outcome we wanted but I promise we'll be back even stronger in next year's gubernatorial election."

The ability to pay to be "verified" on Twitter was a new offering became available days earlier under the social media platform's new owner, Elon Musk.

As of this writing on Friday, Nov. 11, three days after Election Day, The Associated Press had not yet called the race between Lake and Hobbs.

Democrats maintained their narrow leads in key Arizona contests on Thursday, but the races for U.S. Senate and governor were still too early to call with about a fifth of the total ballots left to be counted.

Democratic Sen. Mark Kelly led Republican Blake Masters by 5.6 percentage points, while Democrat Katie Hobbs had a much tighter lead of 1.4 points against Republican Kari Lake in the governor's race. Democrats also led in the races for secretary of state and attorney general.

Election officials in Maricopa County, which includes metro Phoenix and more than 60% of voters, expected to begin reporting results Friday from a crucial group of ballots — nearly 300,000 mail ballots that were returned on Election Day. That group has swung wildly in recent election cycles, from strongly Democratic in the 2018 midterms to strongly Republican in 2020.

For further reading on other "verified" parody accounts that also had been suspended, we previously published various stories, such as this one that reported on a fake Tesla account that was created to troll Musk, Twitter's new owner.