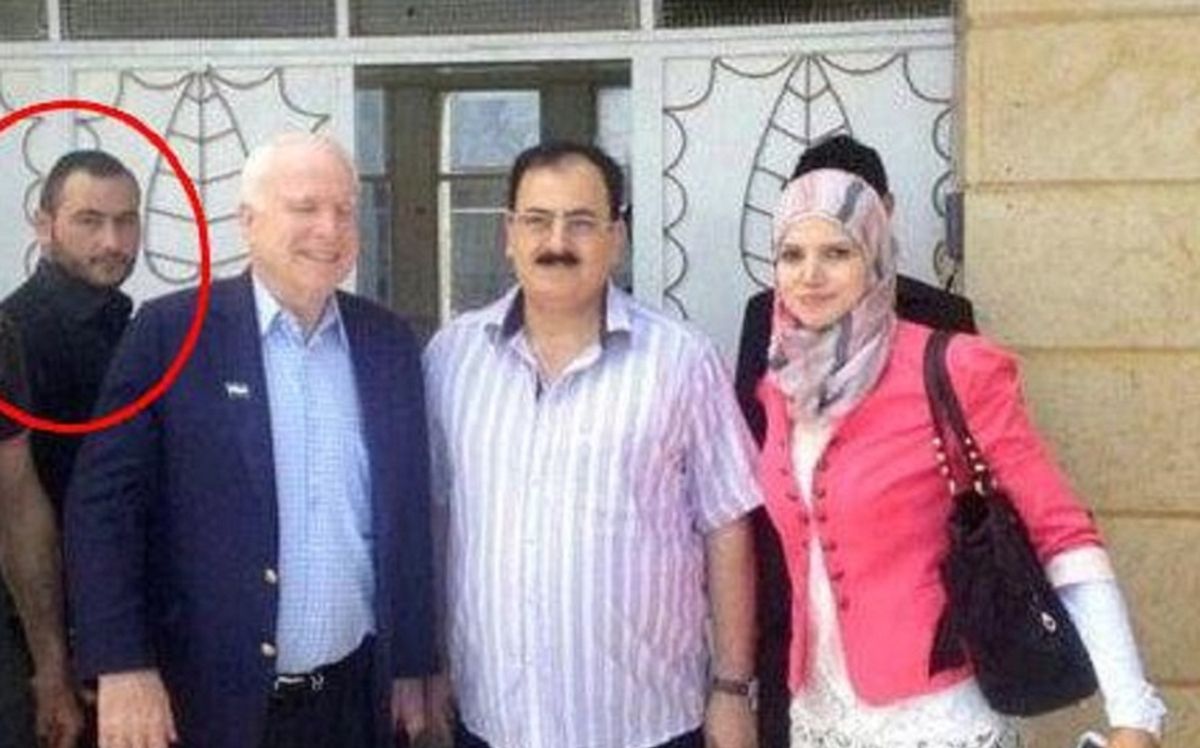 In May 2013, Senator John McCain of Arizona undertook a trip to northern Syria, where he met and posed for photographs with members of the Free Syrian Army (FSA), an opposition group founded in 2011 during the Syrian Civil War with the intent of bringing down the government of Syrian president Bashar Hafez al-Assad. The month before Senator McCain's trip, the Obama administration had promised to provide military assistance to opposition fighters in Syria:

“I’m going to press to make sure this is a matter of weeks. It has to happen quickly; it has to have an impact,” Kerry said at a news conference after marathon meetings to unify the rebel movement and its international backers.

Kerry’s description of the body armor and other defensive material was the first public confirmation that President Obama has approved additional shipments of nonlethal equipment directly to the rebel military, on top of the food and medical supplies that Kerry announced in February.

Later reports indicated that elements of the FSA were both battling ISIS militants and defecting to ISIS, the latter prompting the online circulation of photographs from Senator McCain's Syrian visit along with rumors that the senator had posed for photographs "with ISIS militants." In particular, one photograph was said to show Senator McCain posing with Abu Bakr al-Baghdadi, the 1st Emir (and later the leader) of ISIS:

Senator John McCain in a picture on the blog Socio-Economic History, with ISIL head Abubakar Al Baghdadi and people in or aligned with the Free Syrian Army. However, Abu Bakr al-Baghdadi was extremely unlikely to have been hanging around an FSA stronghold posing for photographs with an American politician in May 2013, and the person seen in the background of the above-displayed photograph (identified with a red circle) bears only a passing resemblance to al-Baghdadi, who in recent years has been sporting a full beard: Moreover, as the New York Times reported, the "ISIS leader" seen in the photograph with Senator McCain was actually the commander of another Syrian rebel group allied with the FSA, not al-Baghdadi:

[I]t has been vexing for Mr. McCain to be battling persistent — and false — Internet rumors that he not only helped invent [ISIS] but also knows its leader, Abu Bakr al-Baghdadi, the self-proclaimed caliph of the Muslim world and America’s latest Public Enemy No. 1.

The rumors are based partly on images of a Syrian fighter who resembles Mr. Baghdadi, seen in photographs with Mr. McCain — some originally posted on Twitter by the senator — during his visit in May 2013 to northern Syria.

Brian Rogers, Mr. McCain’s communications director, was not amused. The man who was misidentified as Mr. Baghdadi in the photographs, Mr. Rogers said, was a commander of the Northern Storm Brigade, a group linked to the Free Syrian Army. Mr. Rogers declined to identify him by name, saying he feared for the man’s safety.

Abu Bakr al-Baghdadi was reported to have died during a military operation in Syria in October 2019.