Did John McCain Cause a Fire Aboard the USS Forrestal that Killed 134 People? 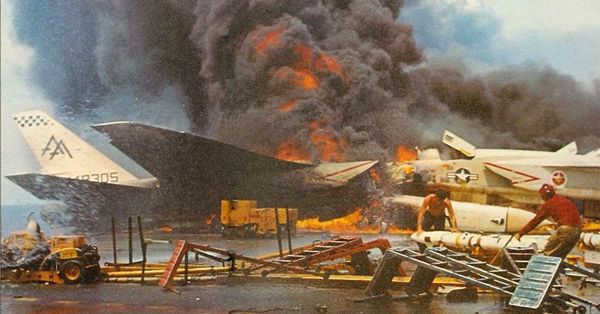 Claim:
A catastrophic fire aboard the aircraft carrier USS Forrestal in 1967 that killed 134 sailors and injured 161 was caused by reckless behavior on the part of then-Navy pilot John McCain.
Rating:

Beginning in August 2017 and well into the fall, a series of pro-Trump fake news web sites took aim at the reputation of Trump administration critic Sen. John McCain (R-Ariz.) by regurgitating an old, fabricated account of what caused a catastrophic fire aboard the aircraft carrier USS Forrestal in 1967. The naval disaster killed 134 sailors and injured 161—one of those survivors was McCain himself, who sustained minor injuries.

The web sites, several of which also defamed McCain as having been "a ‘rat’ or ‘stoolie’" during his five-and-a-half years of captivity as a POW in North Vietnam, laid out details claiming McCain was "personally responsible" for the deadly conflagration on the deck of the Forrestal.

The Navy released John McCain’s military record after a Freedom of Information Act request from the Associated Press. The record is packed with information on McCain’s medals and commendations but little else. The one thing that the McCain campaign does not want to see released is the record of McCain’s antics on board the USS Forestal in 1967. McCain was personally responsible for the deadliest fire in the history of the US Navy. That catastrophe, with 27 dead and over 100 wounded trumps McCain’s record as a prisoner of war in North Vietnam.

WMR has learned additional details regarding the deadly fire aboard the Navy aircraft carrier, the USS Forrestal, on July 19, 1967 in the Gulf of Tonkin. The additional details point to then-Lt. Commander John McCain playing more of a role in triggering the fire and explosions than previously reported.

WMR has been informed that crewmen aboard the Forrestal have provided additional information about the Forrestal incident. It is believed by many crewmen and those who have investigated the case that McCain deliberately “wet-started” his A-4E to shake up the guy in the plane behind his A-4. “Wet-starts”, done either deliberately or accidentally, shoot a large flame from the tail of the aircraft.

In McCain’s case, the “wet-start” apparently “cooked off” and launched the Zuni rocket from the rear F-4 that touched off the explosions and massive fire. The F-4 pilot was reportedly killed in the conflagration. “Wet starting” was apparently a common practice among young “hot-dog” pilots.

Copied word-for-word from a blog post originally published in 2008, the text is an unholy mixture of inaccuracies and outright lies. For starters, the Associated Press' FOIA that the post references actually revealed a slew of the military's top awards and commendations. The post also asserts that "27 died" in the fire (there were 134 fatalities, in point of fact) and that the incident occurred on 19 July 1967 (it actually took place on 29 July). It further asserts that eyewitnesses and investigators evinced the belief that the explosion and fire were caused by McCain showing off by "wet-starting" his A-4 Skyhawk aircraft. (In pilot lingo, "wet-starting" a jet engine refers to flooding its combustion chamber with extra fuel before ignition, which usually results in a loud bang and/or plume of flame on start-up.)

There are no eyewitness accounts in the official record supporting that version of events, however. According to the U.S. Navy's exhaustive investigation into the incident, the findings of which are summarized below in an excerpt from an article by Commander Hank Stewart, USN (Ret.), a naval engineer, the fire was actually caused by the accidental firing of an Mk-32 "Zuni" rocket as a result of an electrical power surge during preparations for a strike against a target in North Vietnam:

Several of the planes started their engines in preparation for launching. Without warning, a rocket was accidentally fired from an F-4 Phantom jet fighter. The rocket struck and ripped open an A-4 Skyhawk on the other side of the flight deck. The rocket passed through the aircraft without exploding and hit the ocean. However, several hundred gallons of jet fuel poured from the Skyhawk’s punctured fuel tank and was ignited by burning rocket fuel left on the flight deck. Burning fuel was spread by the heavy winds across the flight deck and covered several more planes. Within seconds, these aircraft began burning, and the fire continued to spread. The ship immediately sounded general quarters (sending the crew to their battle stations), and an announcement notified the crew of the fire on the flight deck. The heat of the fire exploded a bomb on the flight deck approximately 90 seconds after the fire began, and a second bomb exploded a few seconds later. These explosions severely damaged the carrier and killed several Sailors on the flight deck. The fuel tanks of other planes ruptured, adding to the intensity of the blaze. The exploding bombs also created several holes in the flight deck, spilling burning jet fuel into the ship and allowing fire and smoke to spread inside the ship.

Forrestal’s crew battled and eventually extinguished the fire, with assistance from other Navy ships in the area. It took more than 24 hours to extinguish the fires below the flight deck. The losses caused by this incident were high and included 134 Sailors killed by the fire, and 161 injured. More than 20 aircraft were destroyed. The damage forced Forrestal to suspend combat operations and conduct temporary repairs in the Philippines before returning to the U.S. for permanent repair. Repairs to the ship cost approximately $72 million (equal to more than $528 million in 2017 dollars), and took approximately two years to complete.

A harrowing, 18-minute documentary produced by the U.S. Navy includes actual footage of the fire:

U.S. Navy investigators found that the carrier personnel were inadequately trained or equipped to cope with such an emergency at the time, oversights which have since been corrected with improved vessel design, damage control procedures, and equipment.

As McCain remembered the incident in his 1999 book Faith of My Fathers, the accidentally-launched Zuni missile hit his own plane, "tearing it open, igniting two hundred gallons of fuel that spilled onto the deck, and knocking two of my bombs to the deck," though the official Navy account said that it hit a nearby Skyhawk piloted by Lt. Cdr. Fred White instead (some sources speculate that it may have struck both planes simultaneously). In any case, as the explosions and fire spread, McCain helped dispose of several bombs over the side of the vessel before receiving medical treatment, he wrote in his book. He praised what he described as the "heroics" of his fellow crewmen, whom he believed saved the Forrestal from sinking.

John McCain retired from the U.S. Navy with the rank of captain in 1981. Among his many commendations were a Distinguished Flying Cross noting his "exceptional courage, superb airmanship, and total devotion to duty" during a bombing raid over Hanoi in 1967, and a Legion of Merit with Combat "V" award "for exceptionally meritorious conduct in the performance of outstanding services to the Government of the United States while interned as a Prisoner of War in North Vietnam from October 1967 to March 1973."

On 28 July 2017, McCain tweeted a video about the Forrestal fire to commemorate the fiftieth anniversary of the catastrophe:

On the 50th anniversary of the USS Forrestal fire, we honor the brave American heroes who perished that dark day https://t.co/inuuPN1jzZ pic.twitter.com/S8kEFi9cEo