Two sentences of John Kerry's remarks in Dhaka on terrorism were highlighted in American media coverage of his comments, but didn't tell the entire story. 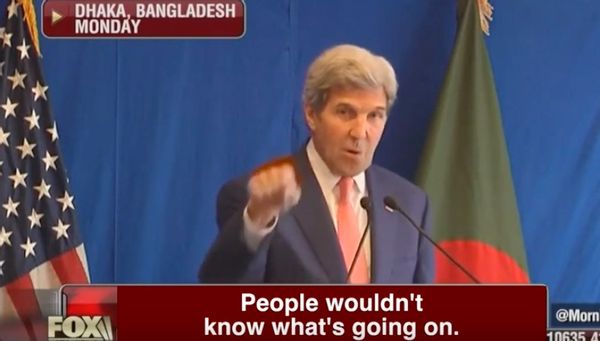 Claim:
John Kerry suggested that the media cover acts of terrorism less often, and perhaps people might not "know what's going on."
Rating:

On 29 August 2016, Secretary of State John Kerry appeared at a press conference in Dhaka, Bangladesh and made statements about terrorism that were widely criticized in the days after his appearance.

Kerry spoke about terrorism, the media, and whether coverage of terror acts led to an increase in such events. In American news reports, Kerry's remarks were truncated in segments in which pundits castigated his comments:

Perhaps the media would do us all a service if they didn't cover it quite as much. People wouldn't know what's going on.

The quote is accurate and unedited, but a full transcript of Kerry's remarks (available on the U.S. State Department's web site) offers a good deal more context:

Remember this: No country is immune from terrorism. It’s easy to terrorize. Government and law enforcement have to be correct 24 hours a day, 7 days a week, 365 days a year. But if you decide one day you’re going to be a terrorist and you’re willing to kill yourself, you can go out and kill some people. You can make some noise. Perhaps the media would do us all a service if they didn’t cover it quite as much. People wouldn’t know what’s going on. (Applause.)

The fact is we have to stand together, and the United States is standing with Bangladesh in this fight. (Applause.)

Now, just as important, we understand that to defeat terrorists, we have to uphold, not betray, the democratic principles that we cherish and they abhor. There may be no single answer to the question of why somebody becomes a terrorist – there are a lot of reasons. But make no mistake, democracy still provides the most resilient and the most reliable platform that we have for preventing and responding to violent extremism. Why? Because when individuals can address their grievances, when you have an opportunity to come together and speak and not fear that you’re going to go to jail, when you have an ability to be able to talk and argue and fight over an issue, build consensus about facts – that’s the way that civil society is able to flourish: when people can freely participate in public debate and are less vulnerable to being subverted by lies, by distortions, by a fake presentation of a peaceful religion, Islam.

So it’s important that people have a stake in building up their society, not being inspired to use violence to tear it down. Now some may argue that it’s more difficult to live up to the core values of democracy when countries face a genuine threat. And I understand that. But guess what? You can go in two directions. I believe that when a country faces those kinds of threats, it’s even more important to uphold the values of democracy. Because if you don’t, you will more quickly feed the frenzy that can come with opposition and panic and hysteria.

Kerry took questions from local journalists, including one about whether government anti-terror actions were sufficient. In response to that question, Kerry cited the influence of media and social media on terrorist groups and lone wolf actors:

... we made it very clear, as you have just said in your question, that there is evidence that ISIL in Iraq and Syria has contacts with about eight different entities around the world, and one of them is in South Asia. And they are connected to some degree with some of the operatives here, and we made that very clear in our conversation. There was no argument about it. I think when the minister says, “home grown,” it’s not a foreign fighter who’s coming in to do it, it’s somebody here who’s chosen to do it. But that doesn’t mean it wasn’t influenced by elsewhere – on the internet, social media, and so forth.

Kerry again referenced Islamic State propaganda and its influence when answering a question about the role of Bangladesh in the global effort to stop terrorism:

We have made significant progress. More and more now, I’m beginning to read the stories of how Daesh is feeling the pressure, people are escaping to get out and go back home or wherever. Now, that helps us solve the problem in Syria and Iraq, but it leaves us with a problem in these other countries where people go back to, or where the social media and propaganda of the group reaches out to. So our job is to fight on every front: on the financing front, the foreign fighter front, the communications front, the counter-messaging front, and particularly on the prevention front initially, so that education, jobs, fairness, transparency, accountability in society – all of those things are helping to give young people a sense of a possibility of a future, not a sense of futility and despair and frustration.

It is true that John Kerry said media coverage of terrorist acts might not be beneficial in efforts to reduce terrorism, and that he specifically said people "wouldn't know [what was] going on." But those two sentences are part of a larger speech in which Kerry warned wall-to-wall coverage of terror attacks "quickly feed the frenzy that can come with opposition and panic and hysteria," exacerbating tensions between civilians and terror groups, and possibly inspiring subsequent terrorist acts.