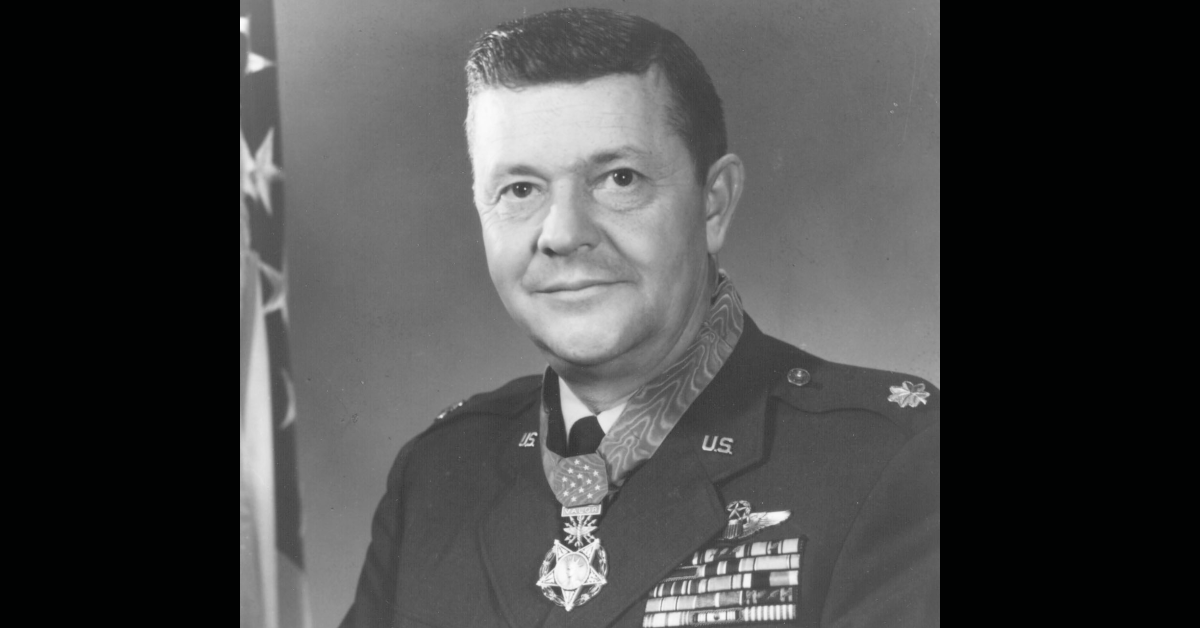 A meme's description of Joe Jackson's actions in Vietnam in 1968, for which he won the Medal of Honor, were accurate.

Jackson's passing did not go unmarked in January 2019, nor did a collective failure take place to commemorate his life and achievements.

In 2019 and 2020, readers asked Snopes to examine a widely shared Facebook post about retired U.S. Air Force Colonel Joe Jackson, a Medal of Honor recipient who died at the age of 95 in January 2019. In particular, the meme made a pointed claim that Jackson's passing went unmentioned.

The most widely shared version of the meme was posted in May 2019, and contained a photograph of Jackson, along with the following text:

"This is Colonel Joe Jackson. After surviving WWII & Korea he landed a C-123 behind enemy lines under intense fire to rescue a three man Air Combat Control Team. He died yesterday & there was NO mention of him. PLEASE SHARE." The earliest iteration of that set of claims around Jackson appears to have come in a Jan. 17, 2019, Instagram post by Vincent Suppa: Joe Madison Jackson was born on March 14, 1923, in Newnan, Georgia, and died on Jan. 12, 2019, in Washington state. A Congressional Medal of Honor Society news release gave the following account of his distinguished military career:

Colonel Jackson enlisted in the Army Air Corps in March 1941, and was promoted to the grade of Staff Sergeant before being selected for Aviation Cadet training.  After graduation, he spent the remainder of WWII teaching gunnery at Eglin Field, Florida. During the Korean War, Colonel Jackson served as Operations Officer and later as Executive Officer of the 524th Fighter Squadron where he flew 107 combat missions.  He was awarded the Distinguished Flying Cross and the Air Medal with three Oak Leaf Clusters.

In 1956, he became one of the first Air Force U-2 pilots, commanding detachments and supervising reconnaissance operations throughout the world.  In the early 1960's while still serving, he attended night school graduating from the University of Omaha with a degree in Education.  Continuing his education, he attended the Air War College and concurrently attended George Washington University, graduating with a Master's Degree in Political Science.

Following a tour in Europe, he was sent to Vietnam where he flew 298 combat sorties and earned the Medal of Honor for actions on May 12, 1968 for his part in the evacuation of Kham Duc while under fire. The medal was presented by President Lyndon B. Johnson at a White House Ceremony on January 16, 1969.  He also received his second Distinguished Flying Cross and three additional Oak Leaf Clusters to the Air Medal.

A lengthy and detailed interview with Jackson himself, in which he recounts his early life and military career, can be viewed here. Jackson's official Medal of Honor citation provides the following account of his role in the Kham Duc evacuation:

Lt. Col. Jackson volunteered to attempt the rescue of a three-man USAF Combat Control Team from the Special Forces camp at Kham Duc. Hostile forces had overrun the forward outpost and established gun positions on the airstrip. They were raking the camp with small-arms, mortars, light and heavy automatic-weapons, and recoilless-rifle fire. The camp was engulfed in flames and ammunition dumps were continuously exploding and littering the runway with debris.

In addition, eight aircraft had been destroyed by the intense enemy fire and one aircraft remained on the runway reducing its usable length to only 2,200 feet. To further complicate the landing, the weather was deteriorating rapidly, thereby permitting only one air strike prior to his landing. Although fully aware of the extreme danger and likely failure of such an attempt, Lt. Col. Jackson elected to land his aircraft and attempt to rescue. Displaying superb airmanship and extraordinary heroism, he landed his aircraft near the point where the combat control team was reported to be hiding.

While on the ground, his aircraft was the target of intense hostile fire. A rocket landed in front of the nose of the aircraft but failed to explode. Once the combat control team was aboard, Lt. Col. Jackson succeeded in getting airborne despite the hostile fire directed across the runway in front of his aircraft.

Lt. Col. Jackson's profound concern for his fellow men, at the risk of his life above and beyond the call of duty, are in keeping with the highest traditions of the U.S. Air Force and reflect great credit upon himself and the Armed Forces of his country.

An even more detailed account of his actions on that day can be found on the website of the Air Mobility Command Museum. The description of Jackson's exploits included in the meme was therefore accurate.

However, the claim that his death went unnoticed was false. By Jan. 17, 2019, when Suppa published his Instagram post, obituaries and tributes to Jackson had already been published by the following prominent sources: the U.S. Air Force; the U.S. Department of Veterans Affairs; the Congressional Medal of Honor Society; the military newspaper Stars and Stripes; Military.com; (an obituary later republished by the Military Officers Association of America); the Newnan Times-Herald (Jackson's hometown newspaper); and the Air Force Times, whose obituary described Jackson as an "Air Force legend."

The claim was even less true when later versions of the meme were published in March 2019, and on May 3, 2019, by which time the description of Jackson's death as having taken place "yesterday" was nearly four months out of date. By then, The Washington Post had published its own obituary for Jackson, which was subsequently republished by several local newspapers around the United States.

A degree of irony exists in the fact that those who, in the spring of 2019, expressed indignation at a supposed collective failure to honor the life and achievements of Jackson, were themselves several months late in marking his passing.