Did Blood Gather in Joe Biden's Eye During a CNN Town Hall Debate?

Right-leaning websites cited "health concerns" over the incident, but might it have an innocuous cause? 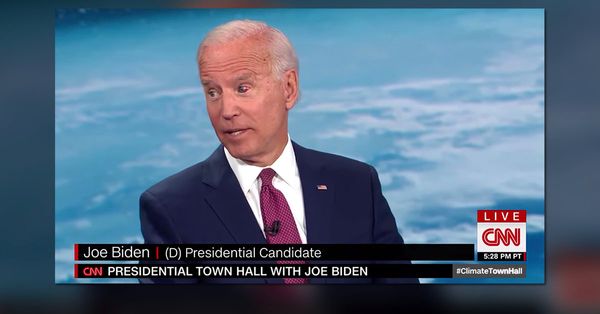 Claim:
Blood spots were visible in the left eye of Joe Biden, a 2020 U.S. Democratic presidential candidate, during a CNN debate in September 2019.
Rating:

We received multiple inquiries from readers in September 2019 about news reports that claimed one of former Vice President Joe Biden's eyes "filled with blood" during a CNN town hall debate on Sept. 4 and about the authenticity of video footage that appeared to show the incident.

"Democratic presidential candidate Joe Biden's left eye appeared to fill up with blood as he answered a question during CNN's climate town hall on Wednesday night. Biden was answering a question about fracking when the blood suddenly became noticeable. As he turned away from the camera to take a question about China's role in carbon emissions, the blood in his eye was easy to spot."

The right-leaning Washington Examiner published an article with the headline "Biden's Eye Fills With Blood During CNN Climate Town Hall" and reported that:

"Former Vice President Joe Biden appeared to have a blood vessel burst in his left eye while participating in CNN's town hall on climate change. A broken blood vessel in the eye, also known as a subconjuctival hemorrhage, can be caused by several things, including high blood pressure, bleeding disorders, blood thinners, or even excessive straining."

Similar reports were published by the Daily Express and the right-leaning Townhall website. Many reports were accompanied by footage that appeared to show blood gathering in the corner of Biden's left eye during the debate:

The video footage was authentic, and blood did indeed gather, internally, in the corner of Biden's eye during his appearance at the televised town hall. However, it's not clear what caused that to happen, and much of the reporting that alluded to "health concerns" appeared to have been based on speculation.

The incident began around 26 minutes into Biden's appearance at the debate, which can be viewed on the CNN website. The blood becomes visible around 50 seconds into the following clip, which was posted to Twitter by CNN itself:

"We can take millions of vehicles off the road if we have high-speed rail," former Vice President Joe Biden says. "I've been the champion of that for the last 25 years." #ClimateTownHall https://t.co/B8y4m3SMc5 pic.twitter.com/DNHPKJzDT3

It's not clear what caused the incident. Some news reports speculated that the footage showed the aftermath of a blood vessel bursting in Biden's eye, something that is relatively quite common and "usually harmless," according to the American Academy of Ophthalmology.

We asked Biden's campaign to clarify what had happened, and what the causes were, but we did not receive a response in time for publication.

Barkoukis, Leah.  "Why Everyone Is Talking About This Photo of Joe Biden From CNN Town Hall."   Townhall.com.  5 September 2019.

Boyd, Kierstan.  "What is a Subconjunctival Hemorrhage?"   The American Academy of Ophthalmology.  3 July 2019.