Is a Christian Group Advertising 'JesusWeen' as Substitute for Halloween?

"JesusWeen" may have fizzled out in real life, but the concept is resurrected every Halloween as a running internet joke. 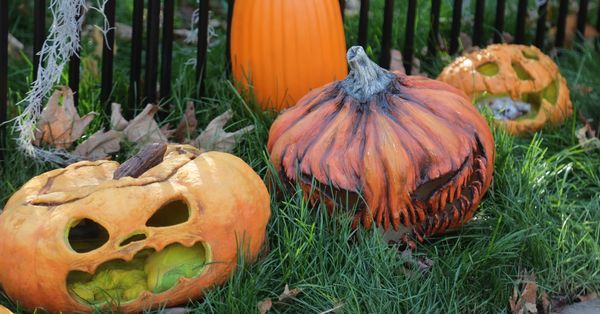 Halloween decorations outside a house in Vaughan, Ontario, Canada, on October 31, 2021. (Photo by Creative Touch Imaging Ltd./NurPhoto via Getty Images)

Claim:
A Christian group is advocating the replacement of Halloween with "JesusWeen" via advertisements on transit buses.
Rating:

In October 2022, some internet users drew amusement from photographs of an unusual bus advertisement. The placard on the back of a Canadian transit bus read: There was a real Christian group trying to promote the idea of replacing Halloween with the ever-so-unfortunate portmanteau "JesusWeen." But the images of buses that are often shared as the source of levity every year are from a 2011 publicity blitz. Two images of the ads on Canadian buses can be found in an October 2011 BuzzFeed article about the JesusWeen movement.

The group has a website, which, as Internet Archive captures show, appears to have been revamped at some point between 2019 and 2020. But the group no longer has active social media accounts. A Facebook page once associated with the group has been taken down and a "JesusWeen" Twitter account hasn't been used since 2016. The group has a YouTube channel, but they haven't uploaded new videos in ten years.

Offbeat as it sounds, the JesusWeen movement earned some press in 2011. The news and gossip site Gawker, for example, contacted Pastor Paul Ade, who ran a congregation in Calgary and launched the JesusWeen initiative. Ade told Gawker why he disagreed with the celebration of Halloween, stating:

I think it's an activity that doesn't have anything to do with Christians. And I think many Christian families are not knowledgeable to what it's all about. Halloween is not consistent with the Christian faith. Many people say they feel uncomfortable on that day. We think people should choose an alternative activity.

Sharon Ogundare, spokesperson for JesusWeen, gave an interview for a 2011 CTV news report about the group, which is posted on JesusWeen's website and its YouTube channel. Ogundare said JesusWeen was not "against candy," nor was it about "hijacking Halloween."

"JesusWeen is about spreading something more positive," she stated.

According to the JesusWeen website, the movement started in 2002 when Ade requested 300 pocket-sized Bibles from the Bible Society for his own evangelist activities.

"A few days before Halloween, a word came to him to give out bibles to everyone knocking at his door expecting candy," according to the website.

But no candy for you, kids. The website continued: "On that day over 40 bibles were given out without him stepping out of his house."

And thus, JesusWeen was born.

JesusWeen therefore started as an authentic Christian evangelist movement, but one that appears to have sputtered out.