Did California Governor Sign a Law Allowing Felons to Vote While in Prison?

In September 2016, Jerry Brown did sign a law allowing some -- but not all -- convicted felons to vote while still behind bars. 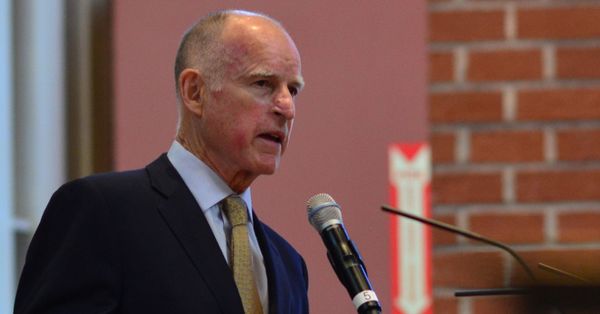 On 28 September 2016, Brown signed Assembly Bill 2466, which allowed felons imprisoned in county jails to vote while still behind bars or under post-release monitoring. The law came into effect in 2017.

In October 2017, we received several inquiries from readers asking whether California Governor Jerry Brown had signed a law that would enable individuals convicted of a felony to vote while still in prison.

Previously, anyone in prison or on parole for a felony in California was barred from registering to vote or casting their ballot. The law came into effect on 1 January 2017.

The measure stems from a 2011 reform in California, where "low-level" (mainly non-violent) felons began to be imprisoned in county jails so as to ease overcrowding in state and federal prisons.

Civic participation can be a critical component of re-entry and has been linked to reduced recidivism...I wrote AB 2466 because I want to send a message to the nation that California will not stand for discrimination in voting.

The bill was opposed by Republican Assembly members, along with the California State Sheriffs' Association and California Police Chiefs Association, according to The Los Angeles Times.

In the fall of 2017, the California non-profit organization Initiate Justice began a campaign to amend the state's constitution to further extend voting rights to individuals on state or federal parole or in a state prison for a felony conviction.

As it stands, Article 2 Section 4 of the California Constitution bars anyone who is deemed "mentally incompetent or imprisoned or on parole for the conviction of a felony" from voting (AB 2466 circumvented this by redefining "imprisoned or on parole" to only include state or federal institutions). Before a ballot measure in 1976, the constitution barred anyone who had ever been convicted of a felony from voting, even after the completion of their sentence.

As of October 2017, Initiate Justice was preparing to gather the 585,407 signatures required to get the proposed constitutional amendment on the ballot at the November 2018 elections. If the proposal is passed by the voters of California, it could pave the way for a new bill proposed by the group - the Voting Restoration and Democracy Act of 2018, which would prohibit the stripping of voting rights from anyone imprisoned or on parole for a felony.

So Brown has signed a law to allow felons in county jails to vote - a significant reform of California's electoral law, but one that still leaves a large cohort of felons (those in state or federal prisons) unable to vote while behind bars.

Nationwide, only two states - Maine and Vermont - allow all individuals to vote regardless of whether they are serving a sentence for a felony, and regardless of the type of prison they're in, according to research by the National Conference of State Legislatures.

In 14 states and the District of Columbia, convicted felons automatically have their voting rights restored as soon as their period of incarceration ends, and most states allow felons to vote once their sentence is completed (that is, including parole and probation.)

In nine states, action is required by the governor or a court to restore a convicted felon's right to vote, even after they complete their sentence.