Does Pic Show Jeffrey Epstein and Ghislaine Maxwell with the Pope?

The photo in question was reportedly taken circa 2003. 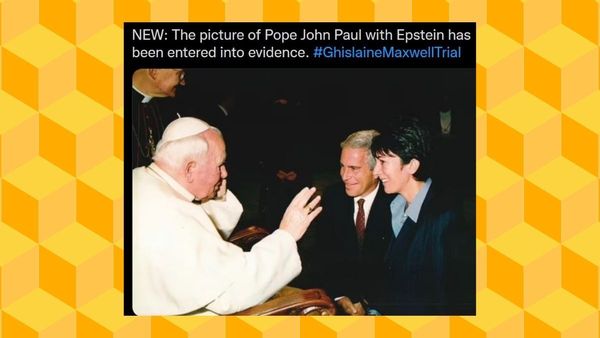 Image Via Photo by Joe Schildhorn/Patrick McMullan via Getty Images

In November 2021, as the case of accused sex trafficker Ghislaine Maxwell was going to trial, a photograph supposedly showing her, associate and convicted sex offender Jeffrey Epstein, and Pope John Paul II was circulated on social media:

This photograph was obtained by The Sun in November 2021 as Maxwell stood trial on various charges related to the trafficking of minors in connection with Jeffrey Epstein. The Sun did not elaborate on how they obtained the photo, but noted that it was likely taken in May 2003. This claim is supported by Epstein's flight records which show that the so-called "Lolita Express" (a popular nickname for Epstein's private jet) traveled from Rome to New York on May 20 of that year.

A source told the Sun: "Pictures like this show just how powerful Epstein’s connections were and his ability to open almost any door. He managed to manipulate his way into royal palaces, the White House and the Vatican, all with Maxwell by his side.”

While the above-displayed photograph may have been unearthed in November 2021, this is actually the second time that we've seen a photograph of Epstein, Maxwell, and the pope. In 2005, police raided Epstein's Palm Beach mansion after he was accused of sexually abusing a 14-year-old, a charge that would eventually lead to a conviction after Epstein pled guilty to soliciting an underage prostitute. In 2019, Fox News obtained a video of this 2005 raid and reported that it featured a number of photographs of Epstein with high-profile people, such as Fidel Castro and the pope.

Fox News reported: "Video from a 2005 police raid at convicted sex offender Jeffrey Epstein’s Florida mansion showed an array of photos on display – one of which appeared to show Epstein and Pope John Paul II, with another depicting Cuba’s Fidel Castro."

The photograph of Maxwell, Epstein, and the pope shown in the 2005 raid video is slightly different than the one obtained by The Sun. In the "raid" picture, the pope's hand is lower and it appears as if he may be shaking hands with Epstein. In The Sun's photo, the pope's hands are raised as if he is blessing Epstein and Maxwell.

Here's a still from the 2005 raid video that appears to show a second photograph from when Maxwell and Epstein met the pope: On December 3, the 2005 video of the raid on Epstein's mansion was shown during Maxwell's trial. Epstein housekeeper Juan Alessi testified that she remembered multiple photographs of Epstein with powerful figures, including the pope.

This article has been updated based on new information. The original version was last archived on Dec. 2, 2021.

“Beaming Jeffrey Epstein & Ghislaine Maxwell Pictured Being Blessed by the Pope.” The US Sun, 20 Nov. 2021, https://www.the-sun.com/news/4110742/jeffrey-epstein-ghislaine-maxwell-blessed-pope/.

Updated [3 December 2021]: Status changed from Unproven to True on the basis of evidence and testimony presented at Maxwell's trial.