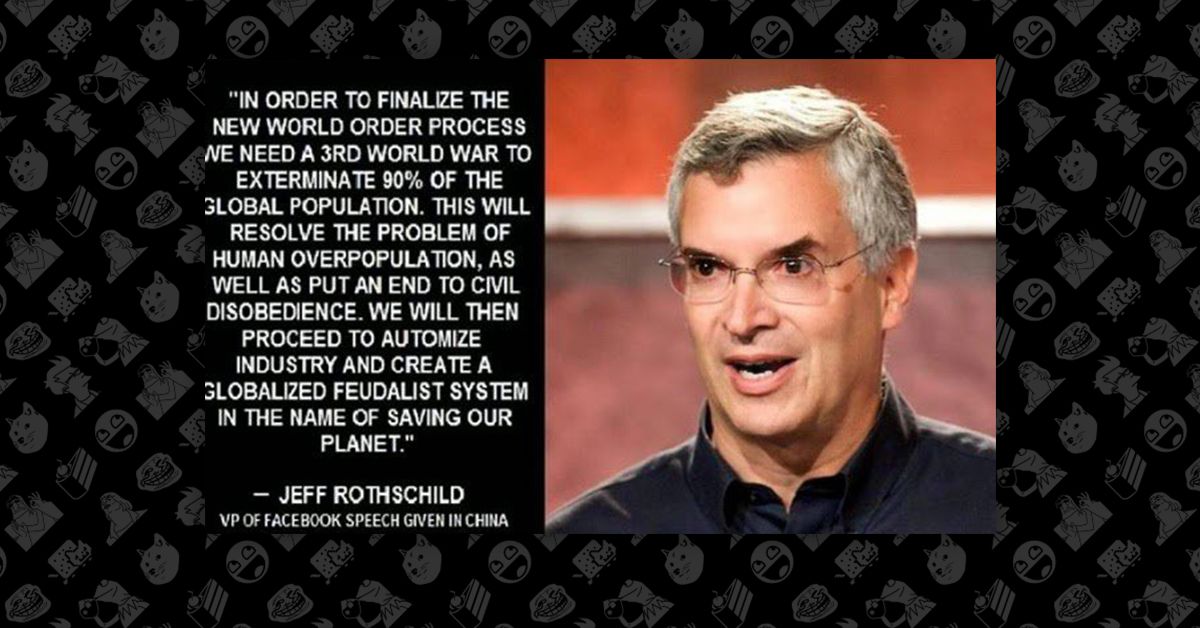 Jeffrey J. Rothschild, an American businessman now in his mid-sixties, is a successful engineer, entrepreneur, and former Facebook vice president whose net worth, according to Forbes, exceeds $3 billion.

He is also, if online conspiracy theorists are to be believed, a thought leader in a CIA-backed New World Order plot to exterminate most of the world's population and enslave the survivors. In Internet memes making the rounds since 2013, Rothschild is quoted as saying a third world war will be required to accomplish these goals: To unpack some of those buzzwords, in conspiracist circles "New World Order" refers to the end result of an intricate plan set in motion ages ago by the world's wealthiest and most powerful elites (also known as "the Illuminati") to replace the existing international framework of sovereign states with a totalitarian one-world government; every human being who is not a member of that elite will be enslaved under a "globalized feudalist system" in which which private ownership and individual freedom will have been eliminated; and "Rothschild" is a surname the former Facebook executive happens to share with a prominent Jewish family long supposed to be at the heart of conspiracies aimed at world domination.

Much as it may disappoint anti-Semitic conspiracy theorists, however, Forbes says that despite his great personal wealth Jeff Rothschild isn't related to the august banking family whose patriarch was Mayer Amschel Rothschild (1744-1812) of Frankfurt, Germany. Jeff Rothschild's father, William B. Rothschild, inherited a rubber import business from his father, Marcus Rothschild, whose name appears nowhere in the Mayer Rothschild family tree.

And although Jeff Rothschild did speak at a conference of Chinese and American entrepreneurs and investors in January 2013 (at which the above photo was taken), the event took place in Santa Clara, California (not China), and there is no record of him saying anything about a New World Order, a third world war, or a globalized feudal system. Nor have we been able to find such references in any other public statements uttered by Jeff Rothschild over the past two decades.

This utter lack of evidence hasn't stopped anyone from promulgating these falsehoods, however. We ran across a similar quote shared by someone using the Twitter handle "truther monkey" in 2014:

Jeff Rothschild gave this speech recently in China to some of the world's richest people ... please share .. pic.twitter.com/dPCqyyo8KT

Though their precise points of origin are uncertain, we traced both quotes to a 3 August 2013 post on a now-defunct "underground anarchist" blog called Anarchadia. Crucially, the anonymous author of the post cited no sources authenticating the statements.

"Where is the evidence he actually said these things?" asked someone in the comments section of the page.

"Where is the evidence he didn't?" was the response — a low evidentiary bar indeed.

As is the case in so much conspiracist discourse, the very existence of the quotes, if real, would be self-contradictory anyway. By definition, the Illuminati conduct their business in absolute secrecy, yet we find them, time and time again (going all the way back to the fictitious 1903 Protocols of the Elders of Zion), allegedly revealing their entire subversive agenda in public.

If that's as secretive they can be, we have nothing to fear from our supposed Illuminati overlords.

Rosenwald, Michael S.  "The Rothschilds, a Pamphlet by 'Satan' and Anti-Semitic Conspiracy Theories Tied to a Battle 200 Years Ago."   The Washington Post.  20 April 2018.

The Rothschild Archive.  "A to Z Listing of Rothschild Family Members."   Accessed 18 May 2018.

United States Holocaust Museum.  "Protocols of the Elders of Zion."   Accessed 18 May 2018.