Did Jeff Foxworthy Make a Joke About Democrat Governors and Trump?

It was the latest in a long litany of quotations falsely attributed to the famous Georgia comedian. 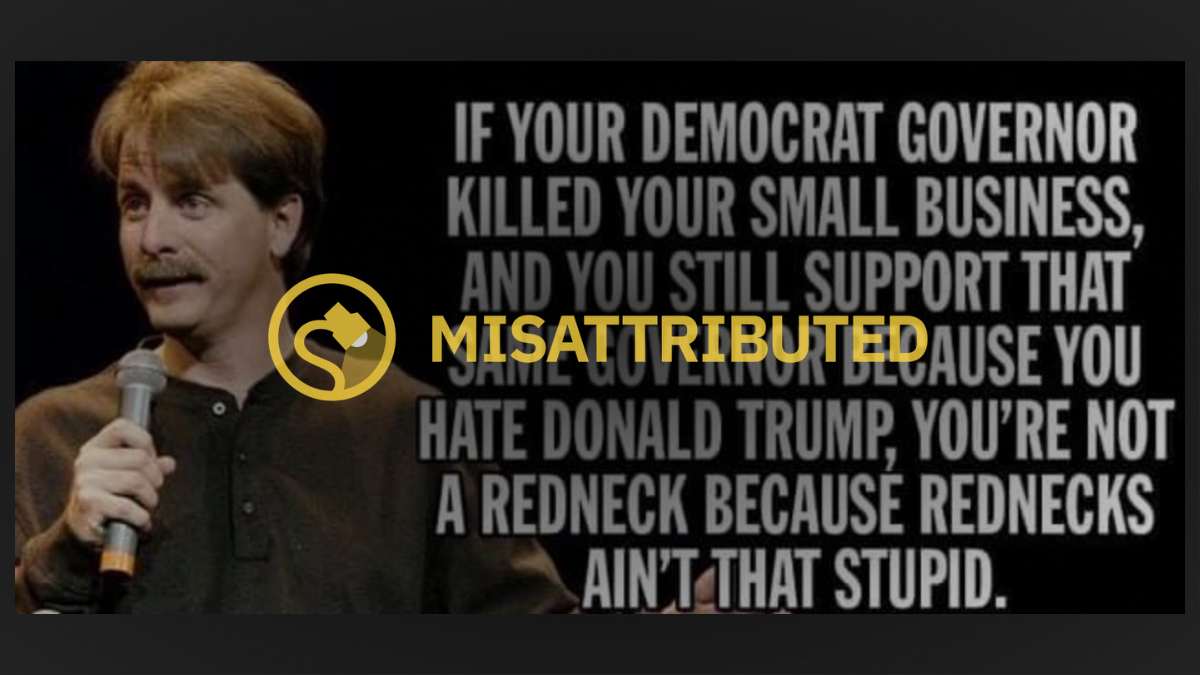 In November 2020, readers asked Snopes to look into a widely shared meme that claimed to present a hyperpartisan political quotation from comedian Jeff Foxworthy.

The quotation — sometimes presented over a photograph of Foxworthy, and in other cases attributed to him in text form — read as follows:

"If your Democrat governor killed your small business, and you still support that same governor because you hate Donald Trump, you ain't a redneck, because rednecks ain't that stupid." The format of the joke ("If you X, then you Y") broadly plays off material that helped launch Foxworthy's mainstream career in the 1990s, when his comedy album "You Might Be a Redneck If..." enjoyed great success. In recent years, politically motivated internet users have deployed the same format in a series of quotations falsely attributed to Foxworthy, as we have examined in detail previously.

While Foxworthy's comedy has, historically, dealt with "redneck" culture, he makes a point of not "getting political." In a March 2020 interview with New York Daily News, Foxworthy explained, "No matter which side you’re on, half of the crowd is going to hate you. That’s not my job." He's aware of the political memes, too, and told the Daily News:

So (to borrow a phrase) if you see a meme with a politically charged one-liner, and it's attributed to Foxworthy, it's almost certainly fake.

However, in order to clear up any doubt about the "Democrat governor" meme, we contacted Foxworthy's publicist, who unequivocally confirmed for Snopes: "This is NOT a quote from Jeff Foxworthy."

We don't know who originally created the quotation, but the earliest example we found came in an Aug. 23, 2020, tweet that, notably, did not attribute it to Foxworthy. This suggests that others later attached the comedian's name to it, either to boost its traction on social media, or because they assumed it came from Foxworthy, or for some other reason.