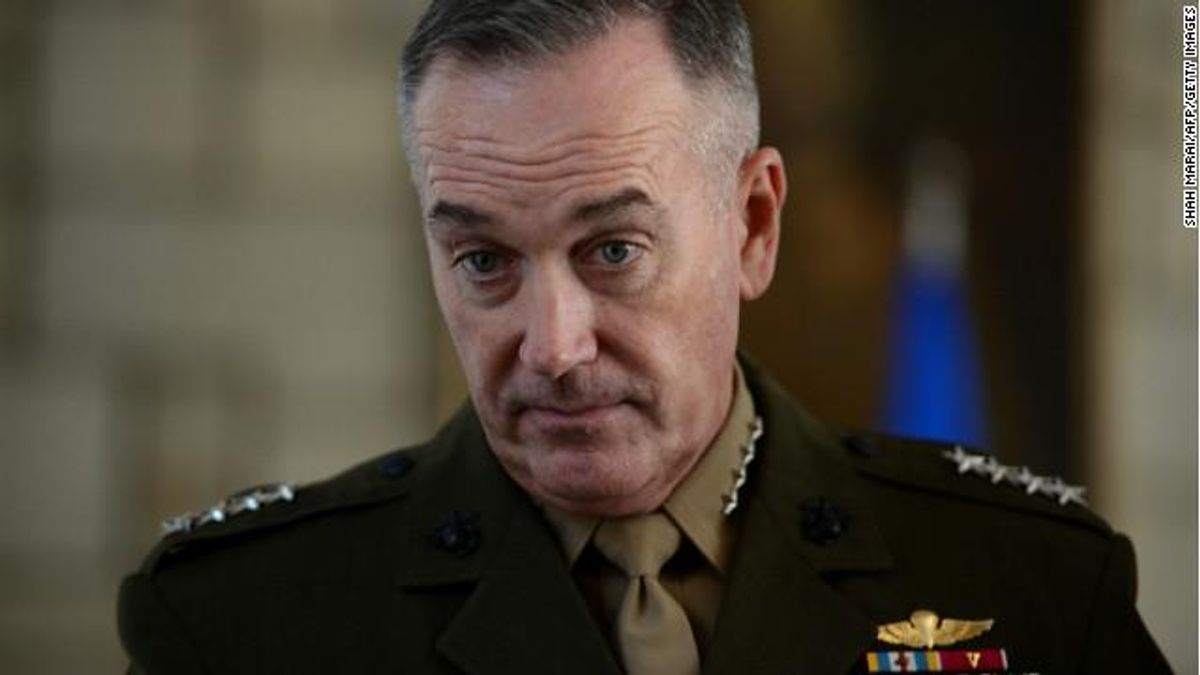 On 5 May 2015, President Barack Obama nominated United States Marine Corps General Joseph "Fighting Joe" Dunford to be the next Chairman of the Joint Chiefs of Staff (JCS), and General Dunford took over that position from Army General Martin Dempsey on 25 September 2015.

On 9 April 2016, the web site US Defense Watch published an article attributed to Ray Starmann, reporting the supposed text of a speech General Dunford delivered announcing his resignation as chairman of the JCS. It began:

Good afternoon ladies and gentlemen, in concern for the lives of current and future US military personnel and to honor those who have gone before, I must speak to the nation today.

I’ve called this press conference to announce that I am resigning as the Chairman of the Joint Chiefs of Staff and I am retiring after 39 years on active duty, which included combat service in Iraq leading the finest Marines in the world.

I am resigning as Chairman of the Joint Chiefs of Staff and retiring from the Marine Corps for the following reasons:

For the last seven years during the Obama Administration:

I have watched and remained silent as hundreds of senior officers were forced to resign or were forcibly retired because of their disagreements with the current policies wrecking the military.

I have watched and remained silent as people who have never served a day in uniform laid siege to the glorious traditions of the US military.

I have watched and remained silent as male ROTC cadets paraded in red high heels, male soldiers conducted physical training wearing pregnancy simulators, combat units dealt with breastfeeding and lactation issues in the field and sensitivity training became the standard operating procedure of the US military.

I have watched and remained silent as trans-genders were authorized to serve in the ranks, and three females graduated from the US Army Ranger School, under what I believe are the most dubious of circumstances.

General Dunford delivered no such speech, nor has he announced his resignation from his position as Chairman of the Joint Chiefs of Staff or his retirement from active service. Those actions, and the text of his purported speech, were purely the invention of US Defense Watch, whose article on the topic is now headed by the following disclaimer:

N.B. Since this article’s publication, some have asked if General Joe really made this speech and if he has indeed retired. General Joe did not say these words. I only wish he had.

In fact, rather than resigning and making such an overtly political speech, General Dunford, in his capacity as JCS Chairman, recently told U.S. military troops to "Stay out of politics":

Growing concern that top U.S. military leaders are increasingly being asked to comment on proposals by presidential candidates has led the chairman of the Joint Chiefs of Staff to draft a letter to all troops with one message: Stay out of politics.

Gen. Joseph Dunford is expected to issue a note to all military forces as soon as this week.
Dunford will "remind the troops of the need to remain apolitical in order to sustain Americans' trust and confidence in them," said the chairman's spokesman, Capt. Gregory Hicks.

The U.S. military has a longstanding tradition of remaining out of politics so that commanders are free to give any president their best military advice without it being seen as part of a political agenda.

Hicks noted that the issue often comes up during the presidential campaign season. Troops are reminded not to appear in uniform at political events, for example.

But this year, the issue has grown more public — and Dunford's letter is aimed at senior commanders as well as the troops — because of the national security debate on the campaign trail.