We also transcribed more of Baker's purported "had a bad day" remarks in reference to the motive behind the March 2021 Georgia spa killings. 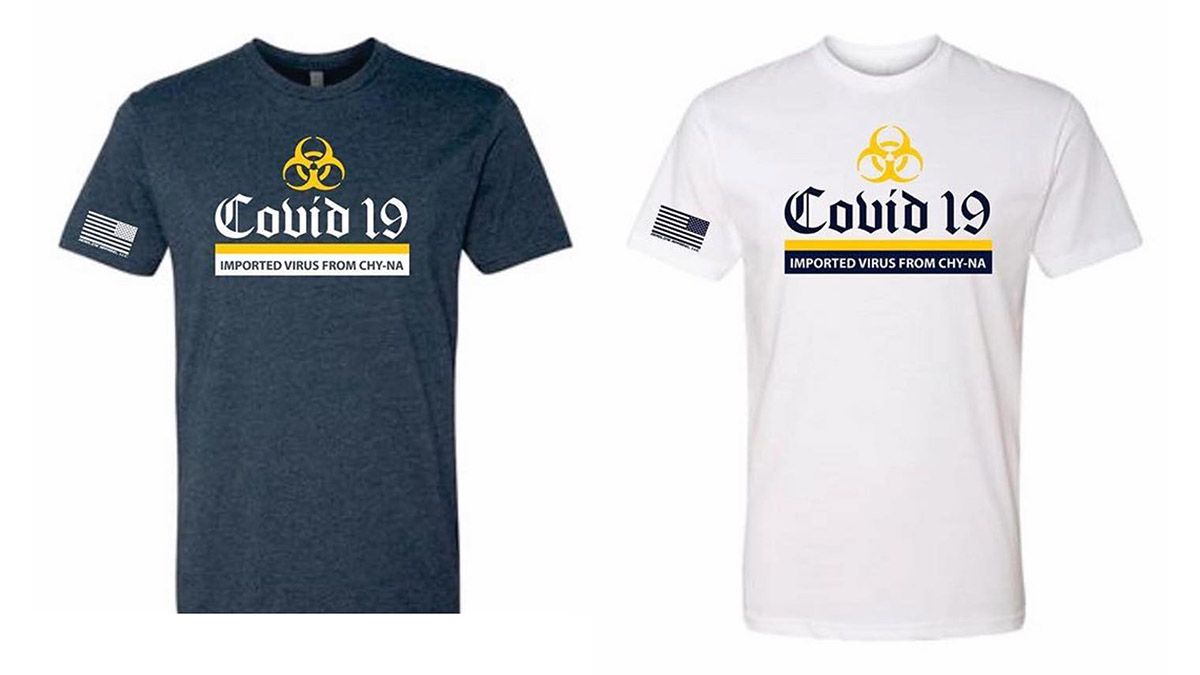 The March 16, 2021 Georgia massage parlor killings that left eight people dead, including six Asian women, led to a swirl of online rumors. One claim focused on Cherokee County Sheriff's Office Capt. Jay Baker, who found himself in the spotlight after purportedly saying during a news conference that the suspect in the killings "had a bad day."

Not long after those comments, which appear in context later in this story, screenshots surfaced online that appeared to show Baker had previously posted to Facebook about acquiring COVID-19-themed T-shirts that read: "Imported Virus from Chy-na."

We were unable to confirm the existence of the April 2, 2020, post pictured in the tweet above. If it existed before, it had been deleted or privacy settings had been changed.

However, we found another photograph posted to Baker's personal Facebook account that showed at least one person wearing the "Imported Virus from Chy-na" T-shirt. The person in the photograph appeared to be a minor. For that reason, we have chosen not to link to the post or show the picture.

The account was confirmed as belonging to Baker after we identified personal photographs posted in the past, as well as past comments from friends and family. Following this confirmation, Baker's Facebook account became unavailable late in the evening of March 17, the night after the killings.

The T-shirts appeared to make light of former U.S. President Donald Trump's pronunciation of "China," although apart from that it's unclear what, if any, political point Baker may have been attempting to make by promoting the products. Over the course of the pandemic, Trump repeatedly referred to the coronavirus as "China virus." He also made references to it using the terms "Chinese virus" and "kung-flu," going against widely accepted public health guidelines that warn against titling disease outbreaks after nations or regions of the world, to eliminate stigmatization.

The "Chy-na" T-shirts were purportedly a product from the shop Deadline Apparel owned by William Rownd. On the night after the Georgia massage parlor killings, the T-shirt was the featured design on Deadline Apparel's website.

As mentioned earlier, Baker purportedly also promoted the T-shirts on his Facebook page, as noted by the screenshot in this tweet:

We located the original post that Baker shared from Rownd, which confirmed its existence.

On the evening of March 17, we reached out to both Baker and Rownd for comment by email. We did not receive a response by late morning the following day.

We note for the record that during the time we had access to Baker's now-deleted Facebook page, we found no solid indications of what Baker's political leanings may be.

We were unable to find a news organization that transcribed the press conference in which Baker said the words "had a bad day" in reference to the shooting suspect's state of mind and possible motive. In order to present the full context to our readers, we transcribed the remarks from a previously live TV feed. The portion that appeared in a brief video on Twitter is bolded:

Reporter: "Yesterday it was stated that the suspect was perhaps upset at these locations for allowing him to have an outlet for his addiction. Can you elaborate on that?"

Capt. Jay Baker: "Yeah let me go into a little detail. The suspect did take responsibility for the shootings. He said that early on once we began the interviews with him. He claims that these - and as the chief said, this is still early - but he does claim that it was not racially motivated. He apparently has an issue, what he considers a sex addiction, and sees these locations as something that allows him to go to these places, and it's a temptation for him that he wanted to eliminate. Like I said, it's still early on. Those were comments that he made."

Reporter: "Did he discuss any kind religious motivation for this, or was he..."

Baker: "None political. I've heard nothing about politics."

Reporter: "Any sense of his social media history? Is that something you've been able to look up?"

Baker: "That's something that investigators, and they've been working on it. That's certainly one of the things they'll be doing."

Reporter: "Sheriff, did you have a sense that he understood the gravity of what he did?"

Baker: "When I spoke with investigators, they interviewed him this morning, and they got that impression that, yes, he understood the gravity of it, and he was pretty much fed up and had been at the end of his rope, and yesterday was a really bad day for him, and this is what he did."

Reporter: "He's a pretty young guy. Was he a student? Does he live with his parents?

Baker: "21 years of age. It's my understanding he does not live with his parents. I don't know who he was living with at the time of this incident."

Reporter: "Is he employed?"

Baker: "I'm not aware of that either."

The Associated Press reported that Asian Americans have feared retaliation since the onset of the COVID-19 pandemic. It also noted that the Atlanta-area killings came "on the heels of a recent wave of attacks against Asian Americans."

In sum, it's true that Baker with the Cherokee County Sheriff's Office promoted COVID-19-themed T-shirts that read: "Imported Virus from Chy-na."