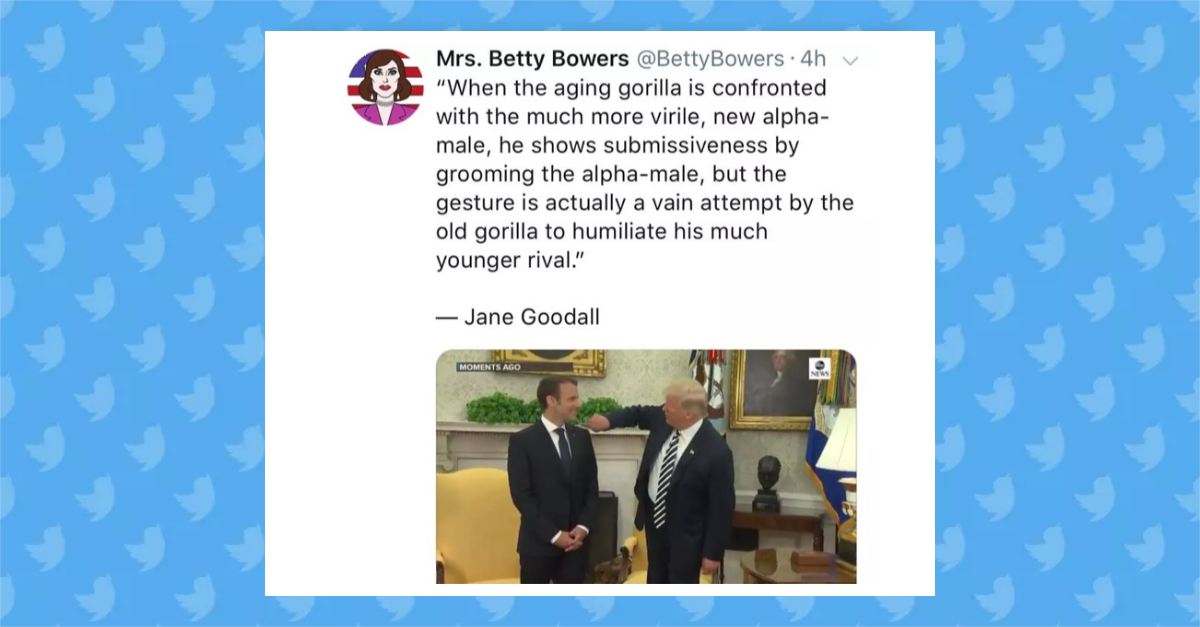 Goodall did once compare Trump's actions to chimpanzee dominance rituals.

On 24 April 2018, United States president Donald Trump hosted French president Emmanuel Macron at the White House, and the physical interactions between the two leaders was the subject of much cable news commentary as well as late-night talk show host joking:

President Trump has shown a lot of affection for Emmanuel Macron during the French president’s visit to the White House. His handshakes seem to last a little too long, fingers get tangled, cheek-kisses flow abundantly. The late-night hosts rolled the tapes and let the jokes fly.

“Have you ever seen him touch anyone like that? He gave him the full Stormy Daniels there.” — JIMMY KIMMEL

“When President Emmanuel Macron greeted President Trump, he kissed Trump on both cheeks. Then out of habit, Michael Cohen showed up and handed Macron $130,000.” — CONAN O’BRIEN

One incident was a little less affectionate, but at least as awkward: Standing next to Macron, Trump told reporters he’d found dandruff on the French leader’s jacket.

“Mr. President, Macron is still standing next to you, smiling, after hanging out with you for two days. That’s not dandruff — that’s cocaine.” — STEPHEN COLBERT

“It is Trump’s first state dinner, and in a major departure from tradition, Trump will not invite Democrats or the media. It’s true, none of those people are invited. If he doesn’t like you, you will not be there. Better luck next time, vegetables — they’re serving tacos tonight.” — STEPHEN COLBERT

The act of Trump's jokingly brushing dandruff from Macron's shoulder was soon incorporated into memes comparing the act to an aging gorilla's attempts to put down a younger rival, a behavior supposedly noted by anthropologist Jane Goodall:

“When the aging gorilla is confronted with the much more virile, new alpha-male, he shows submissiveness by grooming the alpha-male, but the gesture is actually a vain attempt by the old gorilla to humiliate his much younger rival.”

We could turn up no references to this quote about gorilla dominance behavior prior to its appearance online in mid-April 2018. This result is perhaps not surprising, since Goodall was primarily known for her study of chimpanzees, not gorillas. Goodall is frequently confused with fellow primatologist Dian Fossey, whose lifelong study of gorillas was depicted in the 1988 film Gorillas in the Mist, but we found no instances of these words' previously having been attributed to Fossey (or anyone else), either.

However, although this particular quote may be apocryphal, Goodall did make a comparison between then-candidate Donald Trump's actions and primate dominance rituals (referencing chimpanzees rather than gorillas), as quoted in an October 2016 article from The Atlantic:

Over the past few months I have been asking experts on intellectual and emotional persuasion how they explain Trump’s success [...]

“In many ways the performances of Donald Trump remind me of male chimpanzees and their dominance rituals,” Jane Goodall, the anthropologist, told me shortly before Trump won the GOP nomination. “In order to impress rivals, males seeking to rise in the dominance hierarchy perform spectacular displays: stamping, slapping the ground, dragging branches, throwing rocks. The more vigorous and imaginative the display, the faster the individual is likely to rise in the hierarchy, and the longer he is likely to maintain that position.”

In her book My Life With the Chimpanzees, Goodall told the story of “Mike,” a chimp who maintained his dominance by kicking a series of kerosene cans ahead of him as he moved down a road, creating confusion and noise that made his rivals flee and cower. She told me she would be thinking of Mike as she watched the upcoming debates.

Akpan, Nsikan.   "Dian Fossey and Jane Goodall Changed How We Saw Primates. These New Movies Change How We See Them."     PBS NewsHour.   7 December 2017.