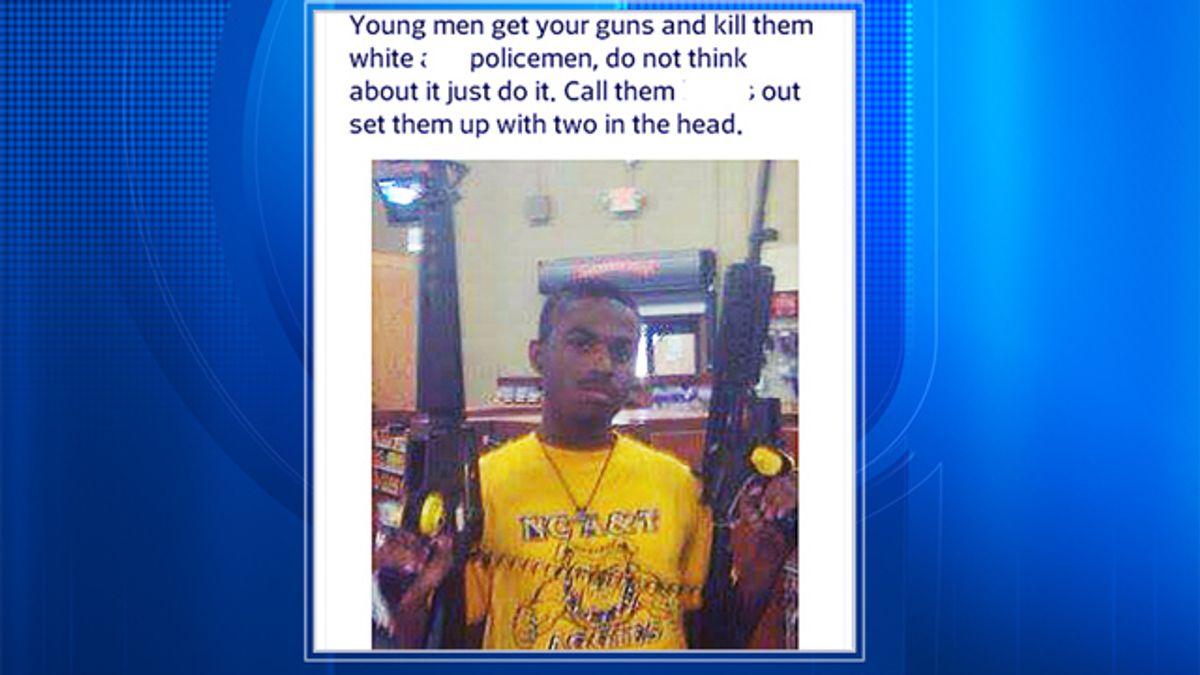 Young men get your guns and kill them white ass policemen, do not think about it just do it. Call them bitches out set them up with two in the head."

I find this incredibly disturbing if it is in fact true and believe it should be reported if found to be factual.

Jammal Longmire, actually a black terrorist who tweeted pictures of himself with guns wanting to kill policemen or is it a conservative scare tactic? Origins:   In June 2015, a screenshot of a Facebook post began circulating on social media, featuring an image that appeared to depict a young black man named Jammal Longmire posing with two guns and issuing the above-quoted threat to police officers.

The appearance of the Jammal Longmire rumor coincided with a then-ongoing controversy over police treatment of a young black girl at a pool party in McKinney, Texas, and most likely the image was created and/or garnered more attention due to what was at the time an ongoing race-related national debate.

Purported screen captures of the post were shared to multiple social networks, with the original appearing to bear a date stamp of 8 June 2015. A version published to Facebook on 10 June 2015 was shared hundreds of thousands of times, and an 11 June 2015 tweet held that "Jammal Longmire" was an "outspoken Black Lives Matter activist" (a claim that apparently did not bear out, as we were unable to find a person of that name or likeness affiliated with the movement):

The image certainly agitated social media users in a time of racial disharmony, and in subsequent months it continued to spread. Yet apparently no trace of any Jammal Longmire existed on the Internet before the rumor became popular: if Longmire was an actual young man (and prominent Black Lives Matter activist) living in America, he maintained a highly atypical non-existent profile on social media and the Internet at large. Some folks speculated that Longmire concealed his accounts from view after the post went viral, but those subsequent actions couldn't have retroactively eradicated all traces he would have left prior to 8 June 2015.

A search for Jammal Longmire restricted to items appearing before 8 June 2015 turns up only misdated references posted after the emergence of the rumor, and we were unable to locate any other evidence pertaining to the existence of a person by that name prior to then. Not only did Longmire seem to spring into existence with a controversial claim on 8 June 2015, but the words "Jammal" and "Longmire" didn't appear consecutively at all on the Internet before that time.

It's possible (though rather implausible) Longmire simply created a social media presence to post the image and make the threat and then disappeared back into the ether. However, national law enforcement agencies and Daytona Beach police treated reports about the post very seriously yet failed to to locate anyone remotely matching the name or photograph seen in the viral post. (It should be noted that Orlando television station WFTV described the post as belonging to Jammal Longmire but clearly did not verify whether such an individual existed.)

FBI and the Bureau of Alcohol, Tobacco, Firearms and Explosives are conducting a joint investigation into a Facebook post.

Officials say the post could be fake, but Chief Mike Chitwood said he received more than 500 emails about the threats.

"We have opened a joint investigation with the FBI, the ATF and the border patrol (Border Patrol?) to try and see who is behind these postings," Chitwood said.

The post, belonging to Jammal Longmire, calls for people to pick up guns and kill police officers, police said.

Police said the man in the picture is holding two assault rifles.

"Is this really an attack on the officers? Is this person on that Facebook really who they say they are? So that's what the investigation is trying to show out," Chitwood said.

"Look what happened in New York City,” Chitwood said. “I mean, you have a guy coming from Atlanta that is a little unstable, gets his hand on a couple guns, doesn't have anything to lose, so I'm just going to go up and assassinate two police officers."

Authorities said Facebook has been served a warrant for the address of the device used to make the threats.

None of the listed agencies turned up a Jammal Longmire in Daytona Beach or anywhere else. A Longmire family was located in Michigan but was deemed to be unrelated to the man in the controversial photographs. Similarly, the educational institution whose name appeared on the shirt worn by the man in the photographs (North Carolina A&T State University) was unable to find him:

This has been investigated internally and determined that he is not one of our students. https://t.co/xNPd7BPn3b

Some viewers observed that the firearms seen in the photograph were clearly corded as something being handled in a retail environment, some speculated they were attached to a video game, and others said they were secured in a fashion typically seen in gun stores. Regardless, the guns visible in the photograph clearly didn't belong to the individual holding them and may not even have been operational.

So while Jammal Longmire has remained a focus of social media outrage since June 2015, neither local police, the FBI, nor the ATF (Bureau of Alcohol, Tobacco, Firearms and Explosives) were able to locate him or his corded guns. The Longmire rumor or hoax was virtually identical to a similar racial controversy-based prank concerning a fictitious McDonald's employee named Bubba Conroy who purportedly spat in white customer's meals. That claim also generated significant measures of outrage on social media sites but did not hold up under scrutiny.