The family of Jacob Thompson requested cards for the ailing child so that he could have a final celebration. 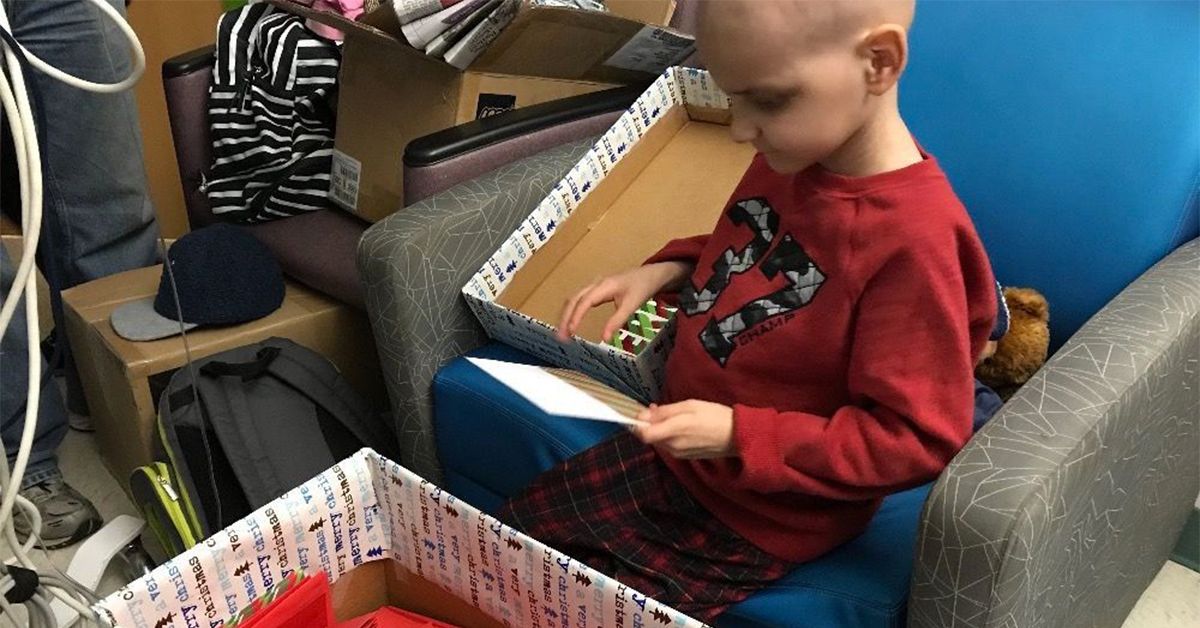 Claim:
The family of a terminally ill boy is asking people to send him Christmas cards.
Rating:

In October 2017, Michelle Simard, the mother of nine-year-old Jacob Thompson, started a GoFundMe campaign for the somber task of having to raise funeral expenses for her terminally ill son. Simard explained that Jacob was unlikely to live to see another Christmas due to a spreading form of cancer known as neuroblastoma:

On October 11, 2017 Jacob was admitted to the Barbara Bush Children’s Hospital for the last time. Jacob’s Neuroblastoma has spread to his head — namely the sinuses, bottom of the skull, several spots in the small bones in the inner ear and several spots on the membrane between the skull and brain. We started radiation a week prior and Jacob’s condition got worse and he was having no success with oral pain meds.

On on the Monday the 10th we started chemotherapy in conjunction with the radiation and by Wednesday the doctors were concerned that there were no significant reduction of pain and decided to admit Jacob. Since then we have learned that his hip is extreamly peppered by tumors, which was described as looking like lace. This obviously has added to the pain and more importantly with his ability to walk and move around.

With that being said, his father, Roger and myself have been told that we should be spending as much time as possible with him and we should start making arrangements for his passing. It is expected Jacob may pass away within the month. Today Roger and I went to start making prearrangements for Jacob’s funeral, and were sticker shocked. No one thinks about having to do this type of planning for their child and because of that we did nor do not have life insurance on him. We are asking for some assistance from family and friends to help support this.

We we understand everyone lives on a budget and if you can not donate the best way to help (other than prayers) is to pass this along on your Facebook or other social media. Jacob has touched the lives of so many, he as well his father and myself appreciate your continued support, love, and well wishes.

Although Simard's initial message was intended to address the "sticker shock" of the costs associated with funeral planning, another campaign grew out of hwe fundraiser. According to WBZ-TV, Jacob was thrilled by a side effect of that fundraiser — his receiving a number of early Christmas cards:

Jacob has Stage 4 high-risk neuroblastoma, and doctors told his family in early October he probably only had a month to live ... So they’ll celebrate Christmas early this year, and Jacob wants people to celebrate with him by sending him cards, his mother, Michelle Simard told CNN.

“He got some cards from this Halloween, and he opened up and saw them and it was like getting a gift. He read it to us and had a big smile his face and his nose scrunched,” Jacob’s father, Roger Guay, told CNN in a phone interview. “He was excited to see what people had to say and it just brightened his day.”

On 2 November 2017, CNN's Jake Tapper tweeted the address to which interested parties could sent cards or letters to Jacob:

That same day, Barbara Bush Children's Hospital described the outpouring of Christmas cheer toward Jacob as "wonderfully overwhelming," but they also issued a minor request to well-wishers:

Out of concern for Jacob and all the patients at the Barbara Bush Children's Hospital, please refrain from personally delivering cards to the hospital. Instead, homemade cards can be mailed to Jacob, care of The Barbara Bush Children's Hospital at Maine Medical Center, 22 Bramhall Street, Portland, Maine, 04102. Any toys or other gifts sent will be donated to the holiday gift pool for all patients at BBCH, at the request of Jacob's parents.

Unfortunately, Jacob finally succumbed to cancer and passed away on 19 November 2017, but not before he had received Christmas greetings from some high-profile celebrities:

Let's make Jacob's early Christmas as big as he deserves. Here's the card I drew for him. I'm counting on you guys! https://t.co/aVNp0H7efG pic.twitter.com/4SeksvtvyM

Bever, Lindsay.   "This 9-Year-Old May Not Live Until Christmas. So Strangers Are Sending Him an Early Holiday."     The Washington Post.   6 November 2017.