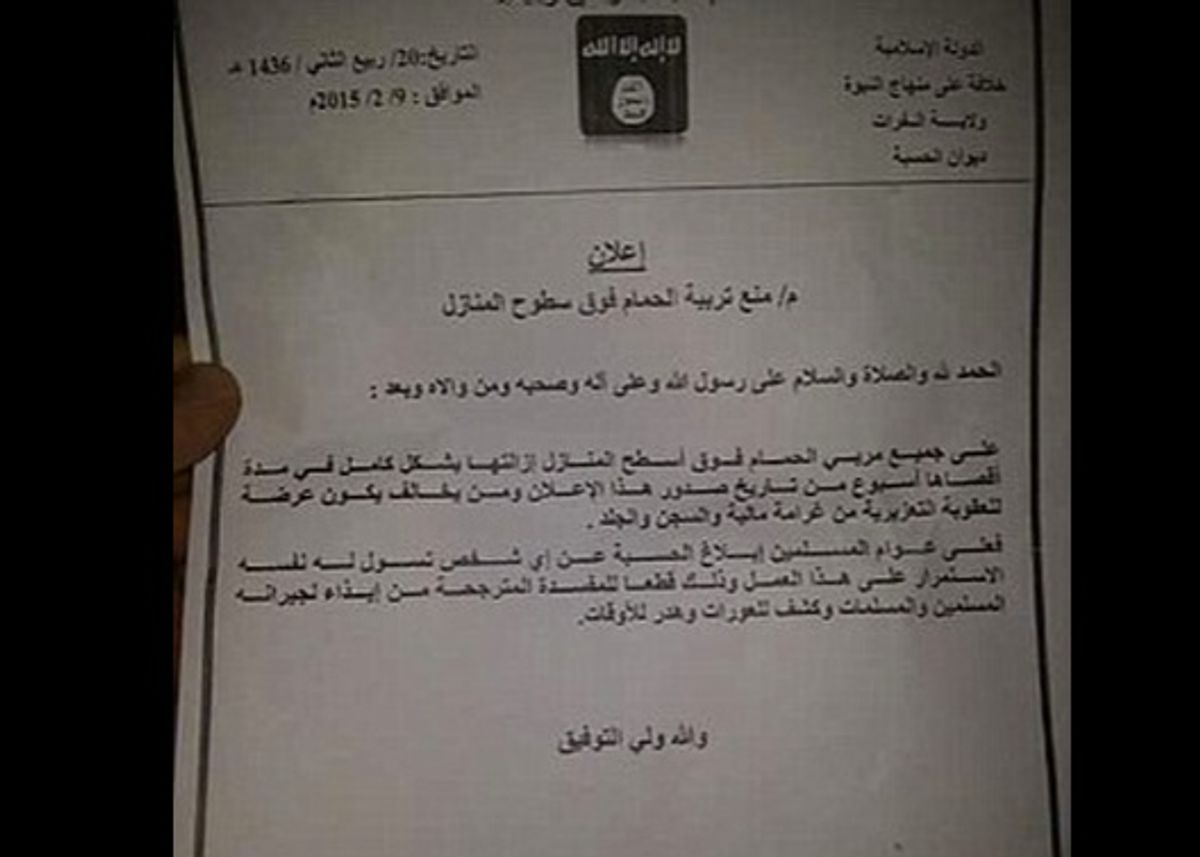 Rumor claims the Islamic State (ISIS) banned pigeons because the visibility of their genitals as they fly overhead "offends Islam."

Claim:   ISIS has banned pigeons because their visible genitals in flight "offends Islam."


I'm seeing reports that ISIS clerics have banned pigeon breeding because the sight of pigeon genitals is offensive to Muslim sensibilities. Since pigeon genitalia is something I've never in my 60+ yrs seen I doubt the truth of this story.

Origins:    On 2 June 2015, the British Daily Mail newspaper published an article titled "ISIS bans pigeon breeding — punishable by public flogging — because seeing birds' genitals overhead offends Islam." In short order, the newspaper's claim was widely aggregated to other outlets, with its multiple iterations lending it an air of credibility:


When rumours of an ISIS ban on pigeons began to circulate earlier this year, it was widely assumed that it was related to the birds being used to either smuggle anti-ISIS messages or cigarettes.

However the new document clears up that misunderstanding, clearly stating that the ban is intended 'to put a stop to the greater criminal act of harming one's Muslim and Muslim women neighbours, revealing the [pigeon's] genitals and wasting time.'

On 5 June 2015, the claim received additional attention when HBO host Bill Maher discussed it at length during a segment of his show Real Time with Bill Maher. Maher pointed to ISIS's purported pigeon genitalia ban as an example of how Islam's core ideology was incongruent with that of the Western world (the embedded clip below contains some profanity):

However, all roads (in this instance) led back to one source: the Daily Mail article; and that article provided no source for its claim, other than a single document in Arabic described as containing the bizarre directive. A reverse image search revealed that the document depicted in the Daily Mail's article was first published on the web site of Aymenn Jawad Al-Tamimi, a British researcher and archivist who specializes in Islamic State-related news and developments. The document was part of a larger set of documents displayed the site, "Archive of Islamic State Administrative Documents."

The Daily Mail's photo was identical (but not credited) to Al-Tamimi's image, and much of the English translation also matched. Al-Tamimi's original translation of the depicted document read:

Prohibition on pigeon-keeping above the roofs of houses

Praise be to God and prayers and peace be upon the Messenger of God, his family, companions and whosoever is close to/loyal to him. As for what follows:

All those who keep pigeons above the roofs of their houses must stop doing this entirely within a week of the date of the issuing of this statement and whosoever violates it will be subject to consequences of reprimand including a financial fine, imprisonment and flogging.

So the Muslim populace must inform the Hisbah of any person who has taken it upon himself to continue this line of work and that is to put a stop to the greater criminal act of harming one's Muslim and Muslim women neighbours, revealing the genitals and wasting time.

And God is the guarantor of success.

On 3 June 2015, Al-Tamimi's entry for that document was updated in response to widespread news reports claiming ISIS banned pigeons' genitals. The addendum noted that the assertion made no sense (as pigeons' genitals are not overtly notable relative to any other creature) and provided a more accurate translation:


NB (Update: June 3, 2015): I have glossed the phrase kashf lil-awrat ("revealing the genitals") because a number of subsequent media reports have misinterpreted this phrase literally. I had assumed that it would be taken as a mere idiom for dishonourable activity, but instead outlets such as The Daily Mail have interpreted this to mean revealing the pigeon's genitals (which wouldn't make any sense). My friend Hassan Hassan gives the best corrective in comments below:

So while Al-Tamimi's translation originally included idiomatic wording about ISIS and a pigeon ban (that many took to mean Islamic State had decreed pigeons' genitals offensive to Islam), Al-Tamimi later clarified that it was never meant to be literally interpreted in that fashion. Irrespective of the swift clarification, the claim that ISIS had banned pigeons because their visible genitals offend Islam continued to circulate across news sites worldwide.